Malawi: a safer home at last

After record breaking floods destroyed countless houses, one woman finally has a place to call home.

In January 2015, 77-year-old Mwaona Bote narrowly survived one of the worst floods in Malawi in living memory. Heavy rains poured for five continuous days before her house fell, leaving her homeless and destitute. Now, after several months in a displaced persons camp she has a place she calls home. 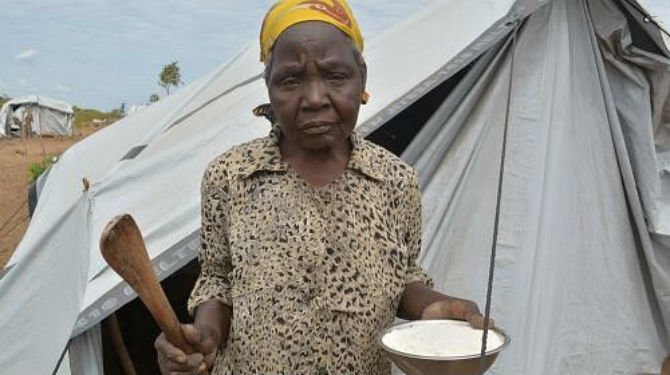 “It was in the middle of the night when my house was filled with water. I had an unusual cold feeling while sleeping. At first I thought it was a snake walking over my body. But no, it was water that was rising right in the house,” she recalls.

As she woke up and realized that she was facing imminent danger, Mwaona rushed to the door and tried to open it. Time was of essence, but to her horror, the door would not open. Finally, she managed to get out of the house, trembling in the thick of the night.

No sooner had she left the house than it collapsed. The sound of the falling wall was so audible that her only daughter, whose house was about 40 meters away, heard it. Chinolo, the river that runs through the area was flooded, causing untold destruction to farms, houses, livestock and infrastructure.

Mwaona's daughter called her, fearing that she might have been caught under the falling wall. “I’m out! I managed to get out before the collapse,” she replied to her daughter’s call as water kept rising and destroying more houses.

She had no time to save anything from the house. She admits that she did not have a lot of property to begin with, but the little she had was dear to her heart. The only thing that she managed to save, before she was evacuated the following morning to Chapinga displacement camp, was a metal plate and, most importantly, her life.

After living at a displacement camp for close to three months, she, along with another 400 displaced people, was relocated to a new site where the risk of flooding is remote. The site was identified by the district council in consultation with traditional leaders.

“I don’t want to go back to my village. The experience I went through was shocking. I’m happy to be here as long as my living conditions are improved,” Mwaona says as she sits outside her new shelter, provided by CARE Malawi with support from the European Commission for Humanitarian Aid and Protection (ECHO). For several months Mwaona and the other displaced people had lived in big shared tents.

From her new home, Mwaona dimly sees her village far off. She remembers the day she survived the floods. The floods left her homeless and destitute, but with support from CARE, Nsanje district council, local leaders and other aid organizations, she has a place she calls a home at Chapinga relocation site.

For Mwaona, life in a new village is not complete. She is an old woman who cannot work to earn a living. Her farm land is covered with sand, making it unusable for agricultural production. Getting food is a challenge. The only clothes she wears are the ones she received while at the displacement camp.

Her priority is to get her life back to normal, finding food to eat. Back home, she used to make money by helping women seeking traditional solutions to their problems. She was a well known herbalist. Now she has started up her business again and lucky for her, the untapped land around the relocation site provides her with the herbs she needs.

“I’m making some money by assisting women who have family problems and diseases that affect women. Sometimes, they draw water for me in exchange for my service,” she says adding that, from the herbs, she makes money to buy food and other basic needs.

While CARE has provided a home for Mwaona and others by constructing temporary shelters, people like Mwaona still lack services such as clean water and a source of income to live decent lives.

CARE Malawi Country Director, Michael Rewald, who visited Mwaona and other community members at the new site, acknowledged that the living conditions at the site are difficult in the absence of basic social amenities like a clean and reliable water supply.

Rewald said CARE Malawi will engage various stakeholders to find ways of making life better for people at the site while working on long term development programmes for the people of Nsanje, including people like Mwaona, who were affected by floods.

“CARE Malawi will be working in Nsanje district to bring sustainable changes in the lives of the people,” he said, adding that CARE Malawi will be implementing a Food for Assets (FFA) programme in Nsanje, with support from United States Agency for International Development (USAID), under which some flood affected people will receive food in exchange for building communal assets.

This article was written by Innocent Mbvundula, in support of CARE.

You can go to TAKE ACTION NOW and help ensure everyone has a safe place to live, especially refugees fleeing Syria.