Malala and the United Nations Secretary-General snap a #showyourselfie! 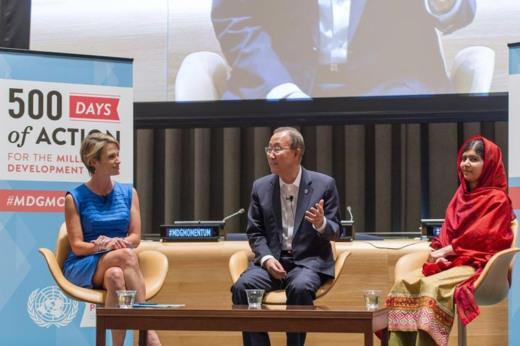 #showyourselfie and join the movement today. Tell world leaders that NOW is the time to prioritize our rights.

Monday marked 500 days until the Millennium Development Goals (MDGs) expire. The MDGs, eight goals agreed upon by world leaders in 2000, is the first development roadmap that addresses issues such as poverty, hunger and disease, education, basic health and women’s empowerment.

The MDG’s have been the most successful anti-poverty push in history. Poverty has been cut in half, more girls attend school, and fewer people are dying from malaria, tuberculosis and other deadly diseases. Yet, as we near the expiration of the MDG’s, much needs to be done to ensure the rights of young people.

To address important issues that are currently not being prioritized by world leaders, I joined 500 young people from all over the world at an event at the United Nations with the Secretary-General Ban Ki-moon and education activist Malala Yousafzai.

As a group, we discussed how to ensure progress and pave the path towards a sustainable future. During his talk, the Secretary-General gave a powerful message to every young person listening:

As he raised this call to action, Ban Ki-moon emphasized the important role that we can all play as young people to have our voices heard loud and clear by decision makers.

He not only offered empowering words, but also took a selfie with Malala and ABC news anchor Amy Robach in support of #showyourselfie, a visual petition for youth.

Malala, who became an education advocate after being attacked by the Taliban on a school bus in 2012, also told the audience why she believes all young people should unite their voices together to achieve bigger and better investment in the rights of young people:

“It’s my dream to see every child go to school. By working together we can achieve this goal. We should believe in the power of our voice, and that we can make a difference.”

Now it’s your turn to #showyourselfie! Join the movement today and tell world leaders that NOW is the time to prioritize our rights.