French Embassy in the US/Flickr
Environment

President Macron awarded grants to 13 from the US and invited them to move to France.

On Monday, Macron awarded grants to 18 climate researchers to support their research on the impacts of climate changes, according to CNN.

The grants are part of Macron’s “Make Our Planet Great Again” initiative — a play on Donald Trump’s “Make America Great Again” campaign slogan — which Macron announced in June after President Donald Trump pulled the US out of the Paris climate agreement. 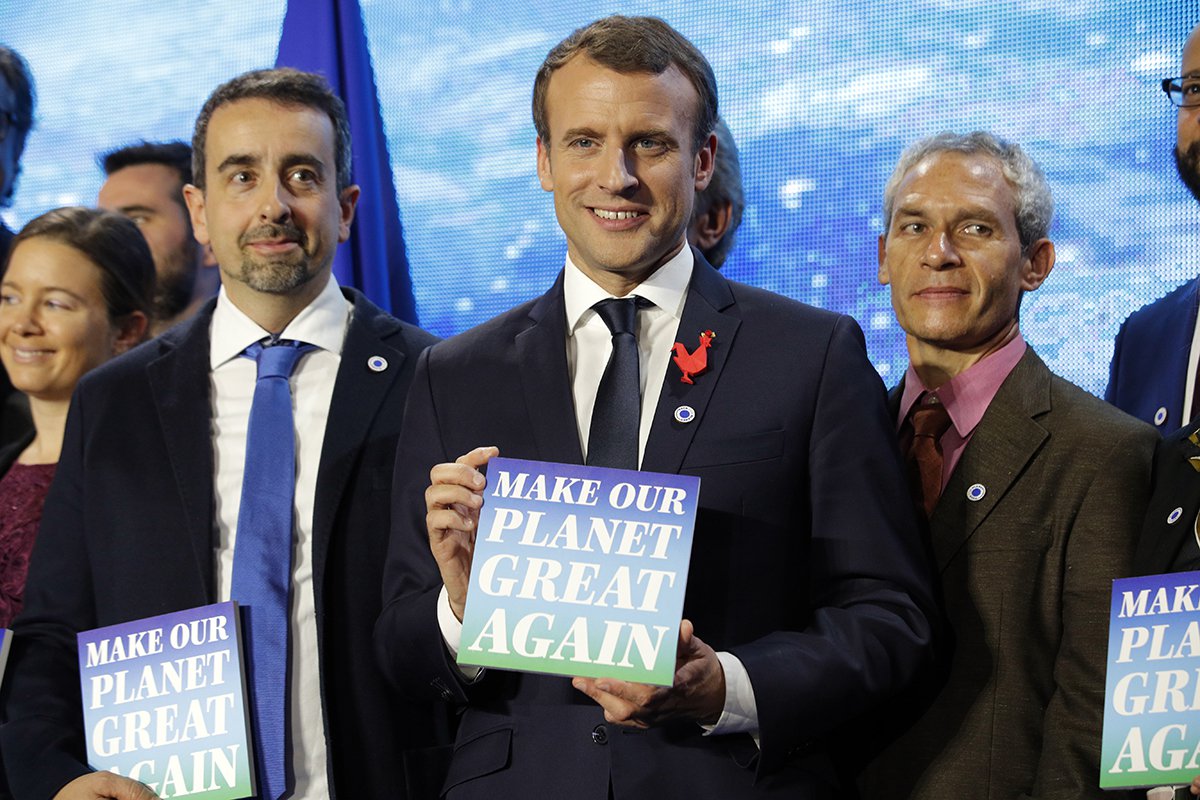 French President Emmanuel Macron, center, attends the "Tech for Planet" event at the "Station F" start up campus ahead of the One Planet Summit in Paris, France, Monday Dec. 11, 2017.
Image: Philippe Wojazer/Pool/AP

In addition to receiving up to $1.8 million over the next three to five years, the 18 scientists — 13 of whom are currently based in the US — were also invited to make France their “second homeland” for the rest of Trump’s presidency, the Guardian reported.

Last month, Trump’s Energy Secretary, Ricky Perry, said, “I still think the science is out” on whether or not human activities have caused climate change. And Scott Pruitt, the head of the Environmental Protection Agency, has said that carbon dioxide — a byproduct of fossil fuels — is not a primary contributor to climate change, in stark disagreement with the scientific community, the New York Times reported.

But scientists, including those working for federal agencies under the Trump administration, say that there is “no convincing alternative explanation” for climate change and global warming besides humans, according to the New York Times.

President Trump has referred to climate change and global warming as hoaxes on multiple occasions.

The concept of global warming was created by and for the Chinese in order to make U.S. manufacturing non-competitive.

NBC News just called it the great freeze - coldest weather in years. Is our country still spending money on the GLOBAL WARMING HOAX?

Snowing in Texas and Louisiana, record setting freezing temperatures throughout the country and beyond. Global warming is an expensive hoax!

But Macron has been vocal about his support for climate change action.

“If we want to prepare for the changes of tomorrow, we need science,” he said on Monday when he announced the grant-winners.

And the scientists are grateful to be able to continue their work.

“For me, the chance to work on some very exciting science questions with my French colleagues and not be so dependent on the crazy stuff that goes on in Congress and with the current administration is honestly very attractive,” Louis A. Derry, one of the funding recipients and a professor of Earth and atmospheric sciences at Cornell, told the Washington Post. “It can be embarrassing to try and explain what is going on at home right now,” she added.

But Macron isn’t stopping there.

The grant-winners were announced just one day before the “One Planet Summit” kicked off in Paris on Tuesday, NPR reported, and they are just the first batch of recipients to be selected. Another round of the competition will launch, in conjunction with Germany, next year, according to the Guardian.

Global Citizen, like President Macron, campaigns to make the planet great again by supporting the fight against climate change. You can take action here to save the environment and slow global warming.