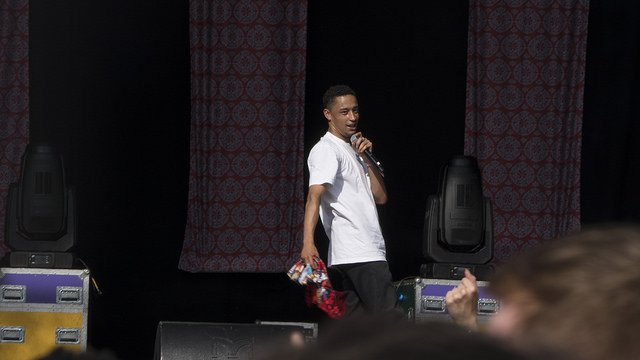 Loyle Carner is a Mercury Prize-nominated rapper, poet, and occasional chef from South London, and his gigs are often exactly like the man himself: inclusive, vibey, and uplifting.

So when a fan started shouting misogynistic comments about Elisa Imperilee, one half of his support act Elisa & Srigala, he decided enough was enough.

I respect @LoyleCarner tonight for his support for women 🙌🏽🙌🏽 pic.twitter.com/zTWSthYUsP

"I'm sorry man, you gotta a learn a lesson,” he told the heckler at Sunday night’s gig. “You gotta go. For being sexist, you gotta go.”

That shit will not be tolerated at any show. He's been banned from that venue, for life. https://t.co/TK4ouHQgv0

Carner was about to perform at the University of East Anglia when the altercation took place. The university told BBC Newsbeat that it has a "zero tolerance approach to sexual harassment" and will "take action" on the matter.

The rapper was widely praised for making a stand against sexism.

Yes, Loyle! We all have a responsibility to speak up and make it known.

Respect to @LoyleCarner for shutting down a man who shouted sexist abuse at his support act. https://t.co/nFbjhJkAVa

But it’s not the first time has fought for equality in music.

British rap has reached a zenith in pop culture as grime — a genre often dominated by men who write music about women — has started to dominate commercial radio. But Carner is different: the women on his debut album Yesterday’s Gone are not objectified in any way. In “Florence” he imagines cooking bacon with an imaginary younger sister, and at a packed-out Glastonbury set he brought his mother on stage to give her “the cheer she deserves”. It’s even his profile picture on Facebook.

Earlier this year, the frontman of Architects, a British heavy rock band, called out a fan at a show in the Netherlands for a similar incident. Singer Sam Carter saw a fan “grab at (a woman’s) boob”, and stopped the show to demand the man leave immediately.

Global Citizen campaigns on the Global Goals, including Goal Five, for gender equality. You can take action on our issues here

TopicsMusicsexismLoyle Carner
Brought to you by