“To talk about any sacrifices I’ve made is a bit sick, isn’t it?” said Liz Clegg. 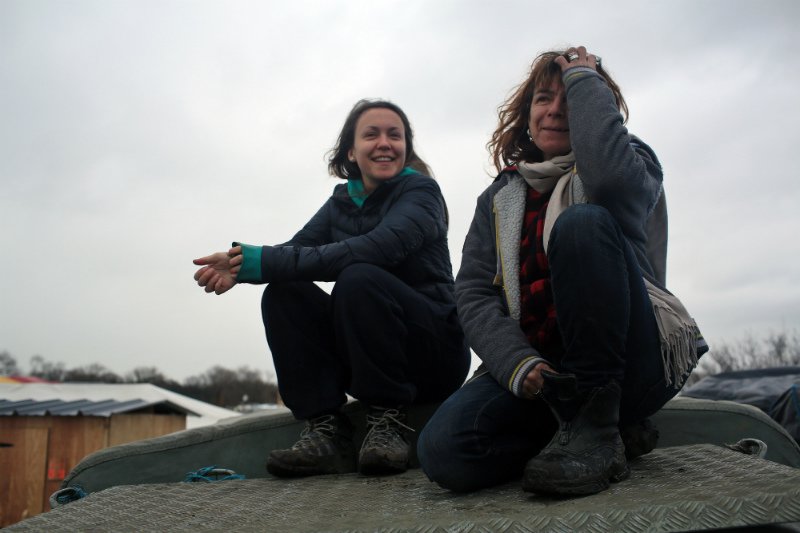 After the 2015 Glastonbury Festival, music enthusiast Liz Clegg found herself in possession of quite a large amount of camping gear. She had piles of leftover sleeping bags, tents, cookware left behind after the annual four-day outdoor music festival.

What she did with all of these supplies is astonishing.

The retired UK firefighter filled up her truck and drove down to The Jungle — a refugee camp in Calais, France, just a day trip (230 miles) away from Glastonbury, full of people who are part of the largest refugee migration since World War II.

The refugee camp known as the Jungle in Calais, France, is home to over 7,000 migrant refugees. It’s a purgatory of sorts for refugees waiting to enter the United Kingdom. Nearly 400 of those waiting are unaccompanied minors according to Help Refugees UK.

Refugees and migrant travelling to the UK through France, have settled around outskirts of Calais since the late 1990s, however the scale of the European refugee crisis has led to worse conditions.

She planned to unload her donations and head back to the UK. When she arrived at the camp, however, Clegg was startled by a scene of chaos.

She told the audience at the Women in the World Summit about the horrific state of abandonment she saw refugee children living in at the camp.

“I did a few journeys, after the third journey I realized there was nobody there to give this stuff out,” Clegg said at the Summit.

Instead of being satisfied by what she’d done so far, Clegg decided she would do more. So she stayed.

She’s since been living and caring for between 300 and 400 children, her favorite group being adolescent boys, in the refugee camp. She's also handed out hundreds of basic cell phones, which has saved the lives of 15 refugees who tried to hide in the back of a lorry to make their way to the UK. She told them to text in case of an emergency and thanks to the phones and courage of 7-year-old, Ahmed, texting Clegg she was able to contact HelpRefugees who alerted the police to stop the truck before anyone suffocated.

“We have no control, so we have to educate children with regards to safety. We’ve tried to educate them about electrified railways and how to look after themselves,” Clegg said.

She also advocates for support, claiming NGOs and governments are not doing enough thus her attendance at Women in the World.

“It’s deeply wrong that we’re informing children because we have no control measures. There is nobody there assisting us. We’re are independent volunteers. There is no agency, there is no NGO that is assisting us to keep these children safe,” Clegg said.

After trouble monitoring conditions in Calais, settlements and camps are being taken down in the area, and France has plans to breakdown the entire “Jungle.”

Tearing down the Jungle will not stop Clegg.

Clegg is a fierce woman fighting for the rights of the voiceless in the Jungle. Her words and activism are acts of courage, and she’s not alone in the camp. Her daughter, Inca Sorrell, joined her to care for refugee children in Calais — reminding Global Citizens coming together even connecting with friends and family can be truly a powerful tool.

But she’s not interested in your appreciation of heroism.

“To talk about any sacrifices I’ve made is a bit sick, isn’t it?,” she told The Independent UK. “I’m not interested in that. I have a passport, I have choices. There is nothing that I’ve sacrificed, because I have those two things. Simple as that.”

To see the full segment, “Refugees: They Are US” from the Women in The World Summit 2016 check out this video.

To help refugees; take action, keep learning, share your knowledge, connect with a refugee, donate to the causes making strides, or open your home and heart.