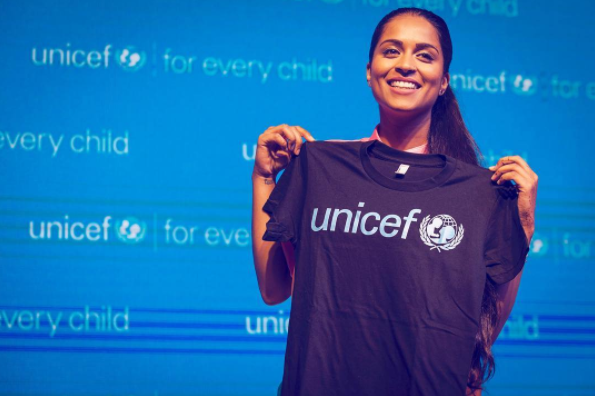 In case you didn’t already know, Lilly Singh is a “bawse” (aka boss) — she even wrote a book about it: “How to Be a Bawse: A Guide to Surviving Conquering Life.”

In addition to having more than 12 million Youtube subscribers, 6.8 million Instagram followers, a book, and topping Forbes Magazine’s list of Top Influencers in Entertainment, she can now add UNICEF Goodwill Ambassador to her brag sheet.

The 28-year-old comedian, known on YouTube as Superwoman, will be using her massive online following to champion children’s rights. Singh, who was born and raised in Canada and is of Indian descent, traveled with UNICEF to India last month where she visited youths participating in the Youth4Change leadership programme.

“As a tribute to my parents, motherland as well, and my culture that I’m from, I want to learn more about the things that I have not necessarily seen and see what the real cause is there that I could possible help,” she explained of her choice to visit India with UNICEF.

UNICEF hopes that “Lilly's unique profile and legion of engaged, enthused fans will help us bring stories of the world's most vulnerable children and young people to this new audience,” the chief of its Goodwill Ambassador program told NPR.

Singh has been using her digital presence as a force for positive change for many years.

In 2015 she started a campaign to end “girl-on-girl hate,” called #GirlLove. The initiative encourages girls to post a compliment toward another girl using the hashtag #GirlLove. At the time, Singh had over 6 millions female YouTube subscribers and wanted to “use [her] reach to speak up against issue [she’d] love to see go away,” she explained in the video that kicked off the campaign.

“I want them to pick up is that it’s cool to support other women. There’s this idea that girls need to be hostile toward each other when that doesn’t actually need to be the case,” she told Glamour.

There's enough room for all of us! 👯👭💙 #GirlLovepic.twitter.com/RsFba2oABa

The YouTube star also partnered with text messaging service Shine to take the #GirlLove movement mobile. Subscribers to the service receive weekly tips from Singh and her #GirlLove team on how to deal with insecurities and be empowered.

But Singh is no stranger to talking about her insecurities. She keeps it real online, talking about everything from awkward dating moments to boob sweat.

She’s a powerful feminist voice in today’s digital age and she’s received a lot of backlash for it.

“Anytime I talk about anything related to women’s issues, it's probably the most backlash I receive...It is insane! I think there’s still a certain level of intimidation and confusion that comes around a strong female voice,” she told Glamour.

Today was a wonderful and humbling day. I'm honoured to announce that I am the newest Global Goodwill Ambassador for @unicef. Not only am I one of the youngest ambassadors ever appointed, but I'm also the first ever ambassador from the digital space. Having said that, I feel a responsibility to bring a fresh perspective to this role. I'm excited not just for myself, but for my amazing audience to join me in doing our part to make the world a better place for all children. Many youth around the world don't have the privileges we do and therefore it's our job to work for them, fight for them and speak up for them. I've got projects stirring in my mind but when it comes to humanity, we're in this together! So if you have any ideas at all to support children's needs around the world please comment below and I'll be sure to engage. Thank you 🙏🏽 #ForEveryChild

But nothing will stop this bold woman from sharing her positivity one laugh, video, or tweet at a time.