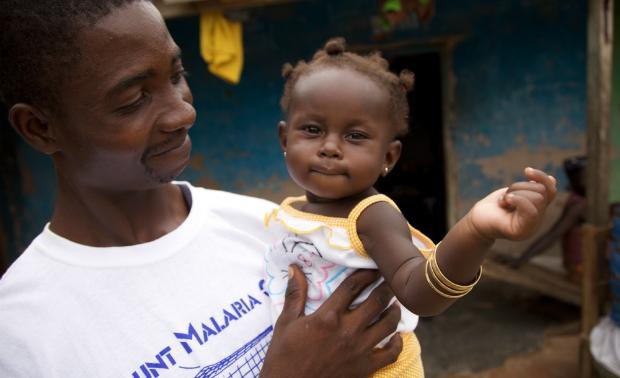 By James Whiting, Malaria No More UK Executive Director
UK support for the Global Fund has the potential to save and transform millions of lives
On 23 September, the UK Government announced its contribution to the Global Fund and we got a step closer to the day when no child dies from Aids, TB or malaria. The UK has pledged £1billion over the next three years – providing the overall target of $15billion is met from other governments and donors. This support has the power to save, protect and transform millions of lives. It can make a tangible difference to help end a needless cycle of poverty in Africa, freeing children from their sick beds so they can return to school and enabling parents to earn a living and provide for their families and communities. So now other Governments such as those in Australia, Canada and Germany are challenged to step up to the plate.
For malaria, the UK’s support could deliver 32million mosquito nets with the potential to protect over 64million people – that’s the equivalent of the entire UK population. Justine Greening, Secretary of State for International Development says: “It is in all our interests to help people to live longer, healthier, more productive lives so we all need to play our part in working towards a world free of HIV/AIDS, malaria and TB”.
A sound investment
The Global Fund to Fight Aids, Tuberculosis and Malaria was created in 2002 to increase and channel resources to tackle these three diseases to where they are most needed, and it has so far saved over 8.7million lives. It works with partners including governments, civil society, the private sector and communities affected by the diseases and draws on local experts to manage and implement programmes.
The Global Fund is responsible for over half of international funding for malaria prevention, diagnosis and treatment and it works: already around 260 million malaria cases have been treated and figures in just last week highlighted that 340million mosquito nets have been delivered to those in need, with the potential to protect an incredible 640million people from malaria.
Ray Chambers, Co-Founder of Malaria No More and the UN Special Envoy for Financing the Health Millennium Development Goals and for Malaria said earlier this month: “Deaths from malaria in Africa have been reduced by one third in the last decade. This would not have been possible without the leadership and funding expertise of the Global Fund. We applaud the UK for its historic financial commitment to the Fund and the role it will play in bringing malaria deaths to near-zero.”
This positive momentum needs to be sustained. Investing now, sets us on course to achieve something truly amazing and avoid staggering costs in the future, this is why the UK Government’s ambitious and continued support needs to be echoed by others.
A winnable battle championed by the UK
UK leadership has played a pivotal role in recent success against malaria, including well targeted UK aid, private sector engagement and cutting edge research and development. Sustaining this leadership and increasing UK aid support is critical to the future success of the global malaria campaign, including achieving the 2010 Department for International Development’s goal to help halve deaths in at least 10 high burden countries. Charles Nelson, Chief Executive of the Malaria Consortium agrees, saying: “As I travel to visit malaria control projects that have been funded by DFID/UK aid, it is clear that these genuinely represent value for money – even if only judged for how effective they have been at creating sustainable solutions and systems that save lives. Huge progress is being made in combatting malaria and the UK’s contribution to this fight has been invaluable. Now is certainly not the time to stop.”
Why I care
My personal journey with malaria began when I was 18. I was on the trip of a lifetime, hitchhiking around Africa. One night I slept in the back of a truck, next to the Limpopo River in South Africa, unprotected from mosquitoes. A fortnight later I was in rural Malawi when the fever hit me like a ton of bricks. I was lucky enough to survive, but still today a child dies from malaria every single minute. As a Dad of two young boys, I find this abhorrent, no parent anywhere should lose their child to a disease which is simple to prevent and cure, with testing and treatment costing less than a cup of tea.
Last year I jumped at the chance to become the Executive Director of Malaria No More UK, motivated by the innovative nature of the organisation and the knowledge that this is a fight we can win. I hope you’ll join us!
TopicsMalariaDiseasesGlobal FundMalaria No More