Lead Me As I Lead You: The Movement for a Society That Takes Care of Everyone

Global Citizen went to a cleanup for Heritage Day weekend, to find out what it's all about.

Why Global Citizens Should Care
The Lead Me As I Lead You movement speaks to the UN’s Global Goals, which include ensuring that everyone has access to a quality education, and eradicating gender inequality and other inequalities. We cannot grow as a community if we don’t uplift the youth, who play a pivotal role in the future of our society. You can join us by taking action for the Global Goals here.

For Heritage Day weekend, the Lead Me As I Lead You movement was out and about cleaning up dumping sites in and around Soweto — and Global Citizen got the chance to join them.

The movement, launched by Terrence Hlatywayo (commonly known as Langa), has been running informally since 2005, and was officially founded in 2015.

The aim is to combat the challenges that South Africa’s youth face on a daily basis, and to expose them to life-changing opportunities in leadership, education, and entrepreneurship.

Through the movement, Langa also launched the "Offenders and Ex-Offenders" programme, working with the aim of rehabilitating former prisoners back into society.

As well as Langa, the team consists of five team leaders, who create and develop programmes to mentor ex-offenders, helping provide them with opportunities once they have left prison. 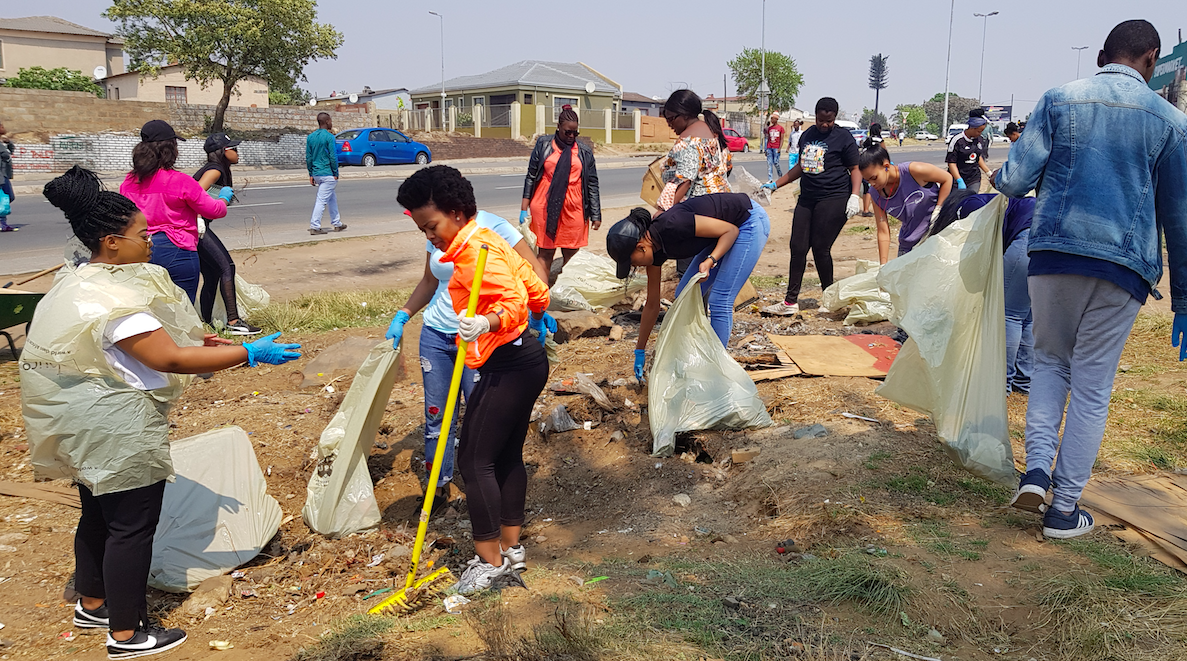 Langa believes it’s important to support former prisoners in navigating their way through society again, and show them that they are still a part of the community — which is where the cleanup comes in.

This time, the Mzimhlophe dumping site outside of Anchor High School was targeted, and on Saturday the five team leaders, 30 young women, and Global Citizen headed out to help tidy up.

Everyone picked up the scattered waste and litter from the site where so much rubbish had been dumped. Some of the women had come from backgrounds of crime, or abuse, while others just wanted to volunteer and play a part in their community.

“Beyoncé, we are doing this for you!” one of the girls shouted, and the young crowd erupted into laughter.

“We want to change the way people see their community, and today was a great turnout,” said Langa.

After a long, hot morning of picking up litter at the dumping sites, the teams took a short water break and walked back into the school so that the team leaders could address their teams.

As we all sat in one of the school classrooms, the team leaders opened the floor with talks that educated the young women about the importance of the cleanup, as well as sharing their stories to show them that they are not alone in any challenges they face.

One of the team leaders, Mbalenhle Nduna, explained that “all five of us work closely with Langa, so that we can come up with fresh new ideas to involve our community and see how we can help them”.

The team has already been doing cleanups in Soweto every two months for the past two years, because, as Langa explains, “a challenge with the community is we need to get them into the spirit of not dumping.”

But Lead Me As I Lead You also provides groceries and toiletries, and even creates job opportunities for young people as well as ex-offenders. “We even have some of our members working for Mamelodi Sundowns as administrators,” Langa adds.

But Langa has a great desire for a cohesive society which takes care of its own people, and is a safe haven for all members young and old.

“This is basically who we are — we take care of people,” says Langa.

The movement works very closely with the Gauteng Provincial Legislature and the Motsepe Foundation, to execute most of their programmes and work.

Langa believes in the Lead Me As I Lead You movement, and that it can only grow from here on out.

He explains that they are finally gaining traction from the various works they continue to do, which is very encouraging for his team. But, he adds, everyone in the community must actively participate to create a more cohesive society.

“I started this movement because I want to see my community develop,” he says. “But in doing that, we need to show others that we need to take care of each other regardless of your background, if we want to succeed.”

For more information on Lead Me As I Lead You, contact Langa at iamtinyiko87@gmail.com.