5 Great Shows You Should Stream This Labor Day Weekend

Labor your way through those shows you meant to get to. 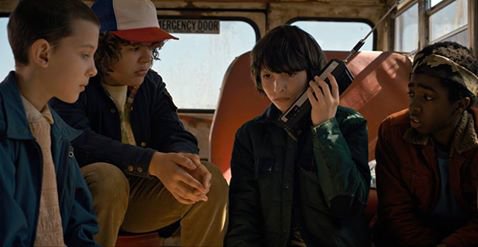 Labor Day in the US is meant to celebrate the skill, dedication, and achievements of the nation’s workforce.

It falls on the first Monday of September and marks the unofficial end of summer. People head to the beach to sprawl on the sand for one last time, crowd their grills with (veggie) burgers and hot dogs, and lounge around, exulting in the leisure time earned by unions more than a century ago.

Read More: How to Be a Smarter Meat Shopper This Cookout Season

Over the three-day weekend, there’s also a lot of binge watching, especially if it rains, but even if it’s beautiful outside. Some people may spend the entire weekend binging on shows they haven’t been able to get to for whatever reason.

So in case you plan on entering a streaming vortex, here are five shows you should watch:

This one is obvious, but another reminder can’t hurt. “Stranger Things” is a truly great show that you should binge watch or rewatch at some point this weekend. It’s a layered tale of friendship, growing up, crime, horror, sci-fi, and psychological allegory. The acting and dialogue are crisp and compelling, with strong breakout performances from all the youngsters involved.

Despite the show’s fantastical elements, nothing feels contrived. The deeper you get into Stranger Things, the more questions you’ll have: such as, why don’t we have more three-day weekends?

The first TV series from director Baz Luhrmann, “The Get Down” explores the birth of hip-hop in the 1970s. Over the decades, hip-hop has undergone various shifts  — from the aggressive bravado of the 90s to the intellectual and joyful verses of today —  and this is an attempt to recreate how it all started.

The first season of “Narcos” started out slowly, a panoramic view of the cocaine trade in Colombia, and gradually narrowed, building to a vicious and suffocating crescendo.

In the second season, Golden Globe-nominated Wagner Moura delves further into the brittle pysche of the drug lord Pablo Escobar and the DEA ramps up its offensive as agents get morally entangled in shifting relationships. Narcos assumes an especially interesting role this year, as it seems the war on drugs could finally be ended after decades of global damage.

"Cooked "is a meditation on the most fundamental elements of cooking and food: fire, air, water, earth. The food writer Michael Pollan travels the world to get to the roots of what it means to eat and prepare food as a human being. You’ll probably run out to buy some sourdough after watching the episode on bread.

It's not new, but you can never go wrong with Chopped, easily the most addictive (if formulaic) cable cooking contest ever conceived. If you’re stumped for what to watch, burn the weekend away with some wisdom from Marcus Samuelsson and jump up and down in anxiety as the chefs start plating, episode after episode, with only 10 seconds left.