Meet Kiran Gandhi, a Global Citizen of America Who Believes the Future Is Female

"We might live in a world one day where we are linked and not ranked." 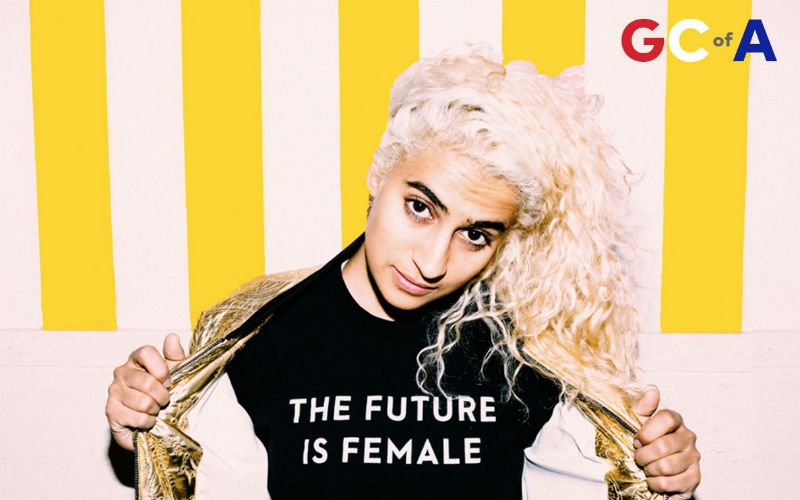 Kiran Gandhi is many things — an artist, drummer, and activist. But she became known around the world when she ran the London marathon on her period and freely bled, to challenge menstrual stigmas around the world.

“To me, that is the definition of ‘oppressive’: when you can’t speak about something that is natural and pure, of the body and completely okay,” Gandhi told the New York Times at the time.

She grew up in New York and has degrees from Georgetown University and the Harvard School of Business. She carries her activist streak into all of the work she does, hosting seminars, giving talks, community organizing, and performing music.

After drumming for the singer-songwriter M.I.A., she began creating electronic music as the artist Madame Gandhi. She released her debut EP, "The Future Is Female," last year. Gandhi sings, raps, and drums on the five tracks that have deep, narcotic beats and politically charged lyrics.

For Gandhi, art is "the most effective tool in being a Global Citizen," because "art instigates empathy" and "it doesn’t really focus on rhyme or reason or power or money or capitalism or hierarchy."

She performed at Global Citizen's "Show Up and Vote" event in Las Vegas last October, where she encouraged global citizens to get involved in their communities before getting the crowd dancing.

Especially in a time when we’ve elected a president who is building walls and drawing lines, I think being a global citizen is understanding that we live in a world that is linked and not ranked and that the very thing that makes America such a wonderful country is the fact that we’ve created, over the history of our nation, the environment to allow a person of any background to thrive. And while there are in place systems of oppression designed to hold us back, there are still many opportunities for those from all sorts of walks of life and that shouldn’t be underestimated. That’s so enormously powerful.

It’s the reason why we have some of the top tech companies in the world, the top leaders in the world, because in our day-to-day walks of life as Americans, many of us do have exposure to people from all nations who want to come here and do amazing work. So to me being a Global Citizen is understanding the value that each person brings to the table because of their distinctly unique global walk of life and that we can benefit by listening more than by speaking.

What experiences helped to shape this understanding?

I think it’s that I grew up in New York City and I grew up with two parents who came from mixed backgrounds. My grandmother from my mom’s side is completely Irish and when she was 19 married an Indian man and broke all the rules and moved to India. Religion at the time was very important so her one rule was that "I need to be able to keep my Catholicism, but I’ll live in India and I’ll learn how to speak Hindi, as long as that’s protected" and it was. My grandmother who's a Hindu respected that, and I think that those values of understanding that each of us are different and that’s what makes us so useful and valuable and wonderful is that we come from these different places.

MCing 🎤 the #womensmarch afterparty last night in DC with the homie 🎧 @ayescold 📷: @shaughncooper

My dad grew up as a Sikh in India and came to New York City and was engaging with people here, but still maintained his authentic self. So watching both of my parents value diversity so much and also growing up in a household where we were taught that our main mission in life is to give back, that we’ve grown up with a lot of blessings, this is where my understanding that we live in a global world is shaped.

I want to be cautious, though, and add that it’s a privilege to be able to afford travel to see the rest of the world, so to me being a global citizen doesn’t really require travel. It requires your intellectual curiosity and your desire to value the experiences of others. You can access that simply by reading, by going online, by going on Instagram even, and seeing what’s going on in the rest of the world and understanding how the decisions that we make in this country vastly shape and effect everyone else. And therefore, with great power, comes great responsibility

Do you have a guiding philosophy as an artist?

My guiding philosophy is that our job as artists is to make the most honest and pure art and let the world decide what to do with it.

How effective is art as a tool to get involved in the world?

It’s the most effective. I grew up in a very academically driven household. It was very traditional in the sense that I went to Georgetown and then I got another very traditional degree at Harvard Business School and yet my full-time job is making art that celebrates and elevates the female voice. I think that art is the most effective tool in being a Global Citizen because it caters to the emotions and it doesn’t really focus on rhyme or reason or power or money or capitalism or hierarchy. It focuses on human emotion, and when we have empathy for each other, this is when we can really start to make the world a better place. Art instigates empathy.

The "Future Is Female" is a song of yours and a mantra in your life — what does it mean to you?

The future is female means that we might live in a world one day where we are linked and not ranked. We actually look to the female archetype for inspiration, alternative styles of leadership. What if instead of defining power as being able to oppress someone else in order to get ahead, we said how can we add value to somebody else’s life such that we make their lives better? And therefore we make our own better. So the future is female means that hopefully one day we’ll live in a world where we are collaborative, where we are emotionally intelligent, where we see these as sources of power as opposed to sources of weakness and we live in a world that is linked and not ranked as Gloria Steinem so eloquently puts it.

We just wrapped a big Vegas show opening for @VicMensa encouraging Nevada residents to #showupvote in this historic election!! We will be focusing on battleground states when my album Voices drops tomorrow, using it as a tool to encourage voter turn out to be the highest yet. Thank you @glblctzn, @iheartradio and @lifeisbeautiful for using music to champion social justice and having us be a part of your mission! #thefutureisfemale

What would you say to anyone who wants to bring about change?

I would say — and this is an activity that I do in many of my workshops — that all we must do is be the best version of ourselves. We must see what we are doing anyway, things that we love to do — in my case play drums, sing, meet new people, go for a run, be with my friends and family and people who elevate me — we must see what we love doing daily and think about how we can activate those things to make the world a better place. To smile at someone when we meet them, to make ourselves feel like we are our most nourished selves so that we give to others. I think that we often feel guilty about the things that we love to do, but the truth is that if you can activate things that you love to do no matter what, then you’re doing what you’re going to default to anyway, but channeling it to a higher purpose, and I think that there’s a lot of power in that.