Allegations of sexual misconduct against U.S. Supreme Court nominee Brett Kavanaugh have thrown his Senate confirmation into turmoil. And the treatment of his accuser, Christine Blasey Ford, has sparked an emotional debate across the country on how legislators should handle abuse claims in the #MeToo era.

President Donald Trump has named Kavanaugh to a lifetime position on the nation's highest court. The nominee is on the brink of becoming one of the nine U.S. judges who will decide cases for decades to come on immigration, the environment, finance, civil rights, and Roe v. Wade, the 1973 decision that opened up American women's access to abortion.

The controversy is unfolding in a new political atmosphere compared with past Supreme Court confirmation hearings. The #MeToo movement that began a year ago has women speaking out against sexual misconduct and finding solidarity in huge numbers, and predominantly male institutions — including the U.S. Congress — are treading more carefully with accusations of abuse and harassment that they once more easily dismissed, experts say. Republicans, in particular, also are worried about how they will fare with female voters in critical November elections.

Take Action: Sign this Petition to #LeveltheLaw and empower girls and women around the world!

"We have had all this attention to sexual harassment and inappropriate behavior and the #MeToo movement. There's just much more awareness of this whole area of sexual harassment, and I think women's rights and how women should be treated in the public sphere," said Stu Rothenberg, a senior editor with the political newsletter Inside Elections. "Politically, this issue right now is a big deal."

Ford, a California professor, said publicly Sunday that Kavanaugh had sexually abused her when they were both teenagers in the early 1980s. He was drunk at the time, she said, and pinned her down on a bed, groped her and put his hand over her mouth when she tried to scream. Kavanaugh denies the episode, saying in a statement: "This is a completely false allegation. I have never done anything like what the accuser describes — to her or to anyone."

The Senate Judiciary Committee, which is vetting Kavanaugh before a Senatewide vote to confirm him, is now figuring out how to proceed. Ford says the FBI should investigate the incident before she testifies. Kavanaugh's Republican advocates, meanwhile, suggest they will hear enough if both sides speak under oath. The testimony could happen as soon as Monday.

That scenario — a so-called "he said, she said" — is a stark reminder of a watershed moment for American women almost three decades ago. In 1991, attorney Anita Hill sat before an all-male Senate panel and detailed how Clarence Thomas, another Supreme Court nominee and her former boss, harassed her at work with sexual talk and advances. The hearings were televised, Americans were riveted, and Hill's credibility was repeatedly derided. Thomas denied the accusations and was confirmed to the court.

Some of the same U.S. senators are still on the pivotal committee, including Chairman Chuck Grassley, an 85-year-old Iowa Republican, and Senator Orrin Hatch, an 84-year-old Utah Republican.

Hill spoke up "to shine a light on the character of someone who would sit at the highest level of our court,'' said Fatima Goss Graves, CEO of the National Women's Law Center. "Instead of being believed, she was savaged by a judiciary committee that painted her as dishonest, treating her as a perpetrator and attempted to discredit her reputation."

Goss Graves says she believes Ford's account, and expects senators to treat her with fairness and respect. The 100-member U.S. Senate had two women in 1991; it now has 23.

"Even in the middle of the #MeToo movement, many survivors fear coming forward, and for very good reasons," she said. "Too often, they pay a very serious price for doing so, including retaliation, threats to their very well being, to their families, to their careers." 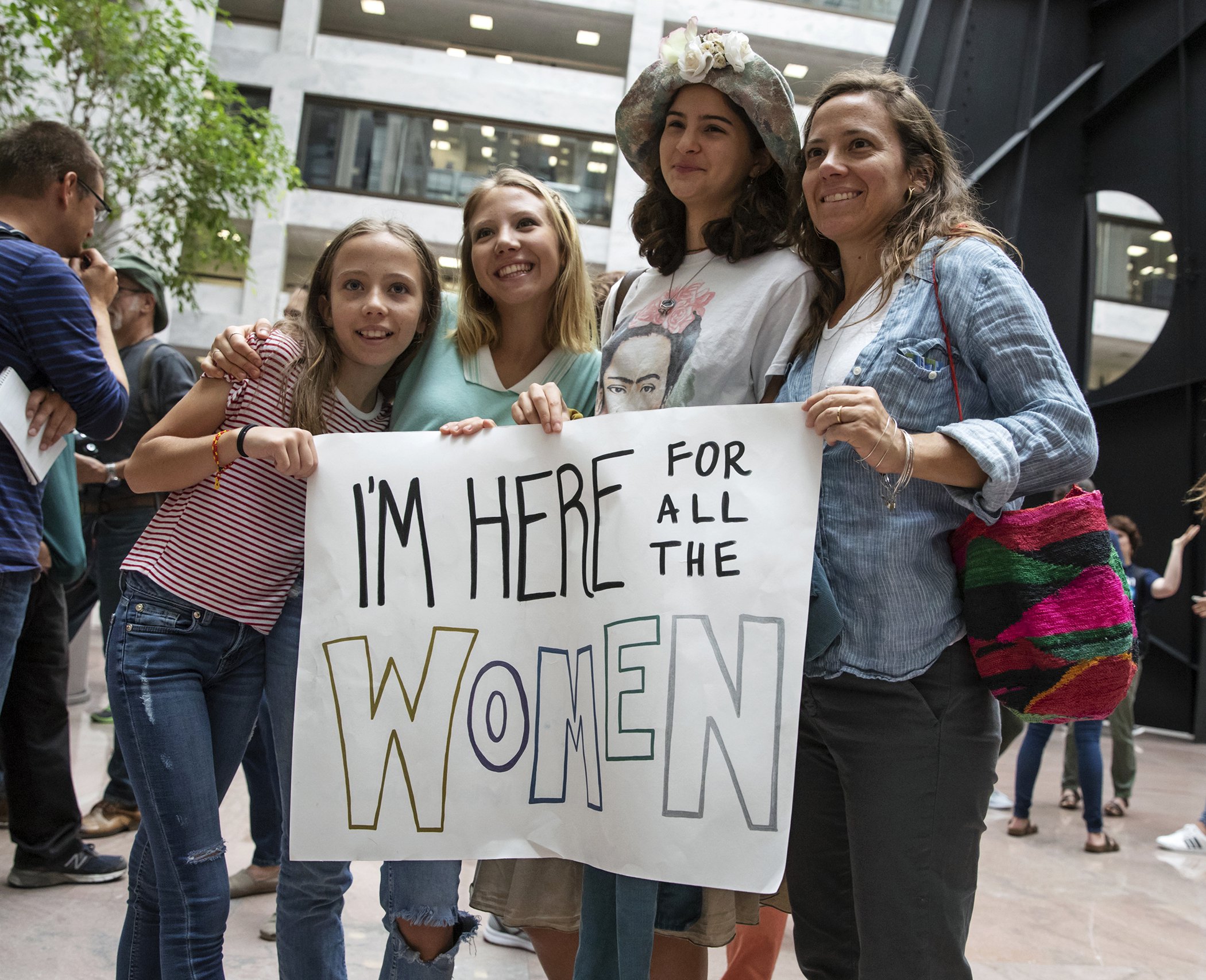 In a letter to the Senate committee requesting the FBI investigation, Ford's lawyer said she has been the target of "vicious harassment and even death threats" and has had to leave her home since going public.

Message to Men: 'Do the Right Thing'

Hill, who now teaches at Brandeis University, wrote in a New York Times op-ed that parallels between the two nomination proceedings are impossible to miss.

"In 1991, the Senate Judiciary Committee had an opportunity to demonstrate its appreciation for both the seriousness of sexual harassment claims and the need for public confidence in the character of a nominee to the Supreme Court," Hill wrote. "It failed on both counts."

Rothenberg, a veteran editor, publisher and political analyst, said he still expects Kavanaugh to be confirmed because Republicans hold a majority in the Senate. They may not have as much sway after congressional and state elections Nov. 6. Polls show female voters favor Democratic candidates by about 20 percentage points, and a record number of women are running for office.

"The current political environment involves a lot of women candidates who have come out of the woodwork because they feel that they have been affected by the #MeToo movement," Rothenberg said.

Female voters will be watching closely to see how the Senate treats Ford and her allegations, he added. As Hill wrote in the New York Times, "There is no way to redo 1991, but there are ways to do better."

Senator Mazie Hirono of Hawaii, one of four women on the judiciary committee, said Tuesday that she's frustrated by how her Republican colleagues are treating Ford.