Protest in Pictures: What the Fight for Racial Justice Looks Like Around the World

John Minchillo/AP
Why Global Citizens Should Care
Racial discrimination puts people’s lives and well-being at risk around the world. We cannot end poverty and achieve an equitable society unless everyone has access to resources and support to thrive. You can join us and take action here.

Protests that started in solidarity with George Floyd — a Black man murdered by a white police officer on camera on May 25 in Minneapolis, Minnesota — grew into a global uprising against racial injustice in a matter of weeks.

While police forces doubled down on violent tactics to contain demonstrations across the US, the Black Lives Matter movement continued to gain international momentum. Thousands of protesters have filled the streets in every continent except Antarctica. As citizens call for action, some leaders are responding to the pressure with commitments to change by disbanding the police, redirecting budgets to youth and social services, and reforming police departments.

Structural barriers cause people of African descent to face widespread exclusion and poverty no matter where they live. Protesters across the world are echoing the outcry to end police brutality in the US and demanding justice for Black people, Indigenous groups, and communities of color in their own countries. They are risking contracting COVID-19 and experiencing police violence to encourage a collective reckoning of racial disparities in access to education, health care, wealth, and more. These gaps in resources and opportunities must be addressed to eliminate extreme poverty by 2030 and achieve the United Nations’ Global Goals.

The global scale of protests demanding peace and protections for all Black people, Indigenous peoples, and people of color illustrates the need to dismantle systemic racial injustices everywhere at an institutional level to build a sustainable future for all.

See how the marches evolved below. 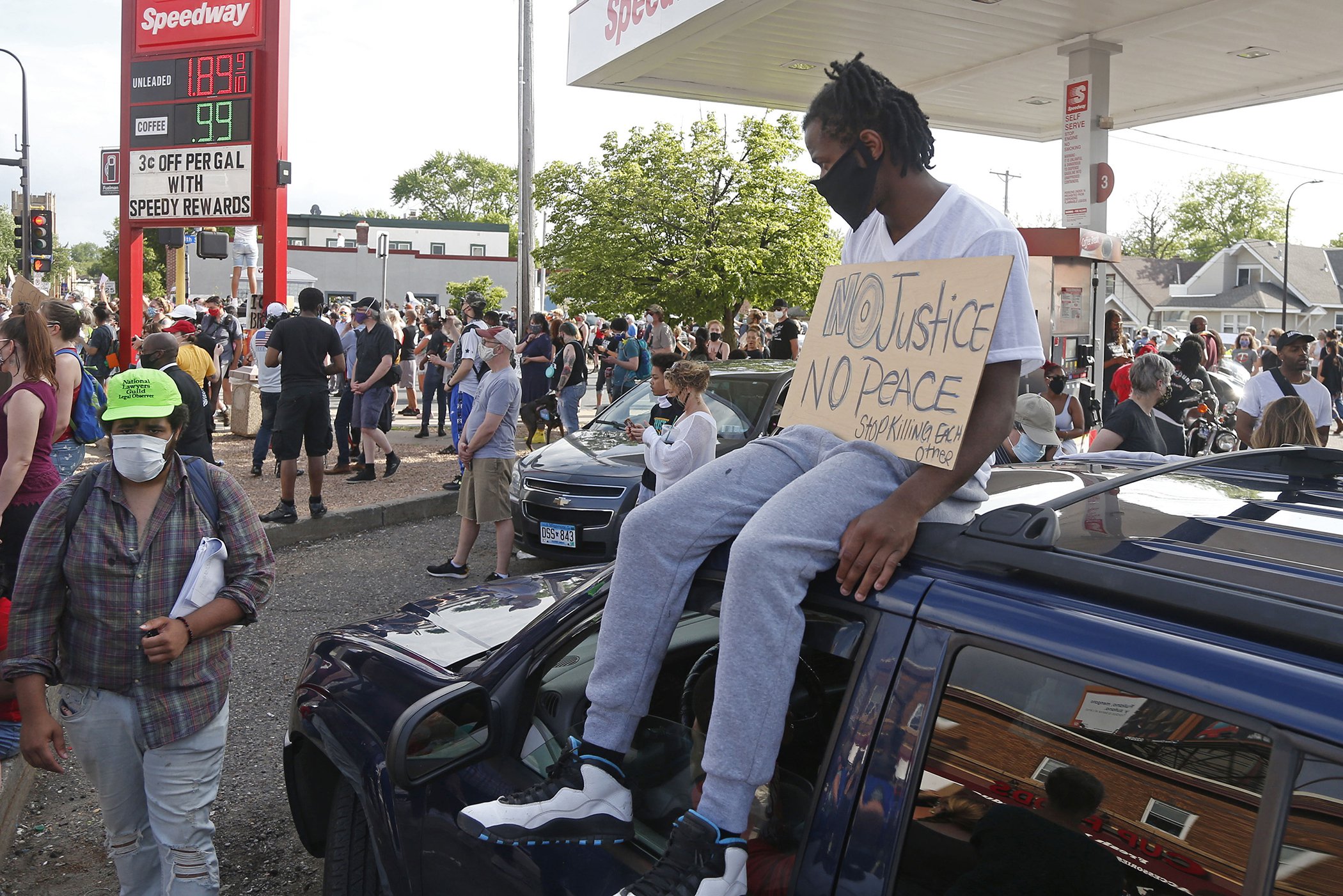 A protester sits atop a vehicle as hundreds of protesters gather, near the site of the arrest of George Floyd who died in police custody Monday night in Minneapolis, May 26, 2020. A video taken by a bystander showed a white officer kneeling on his neck.
Image: Jim Mone/AP 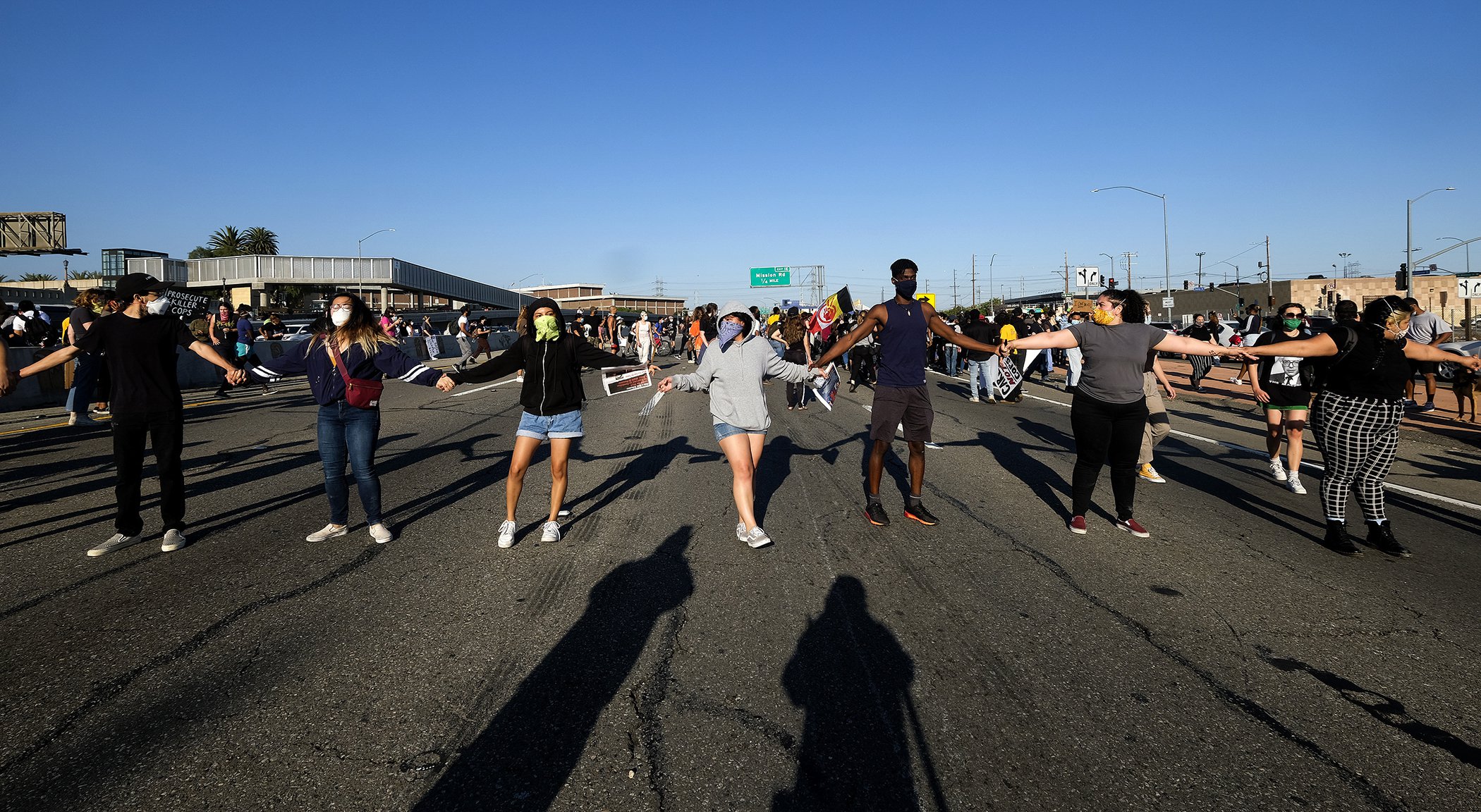 Demonstrators shut down the Hollywood Freeway in Los Angeles during a protest, May 27, 2020, over the death of George Floyd in police custody in Minneapolis earlier in the week.
Image: Ringo H.W. Chiu/AP

Following a day of peaceful demonstrations in Minneapolis, protesters set the Minneapolis Police Department’s Third Precinct building on fire after prosecutors announced a verdict had not yet been reached on whether or not Derek Chauvin, the police officer who killed Floyd by pressing his knee to his neck for over eight minutes, would be charged. 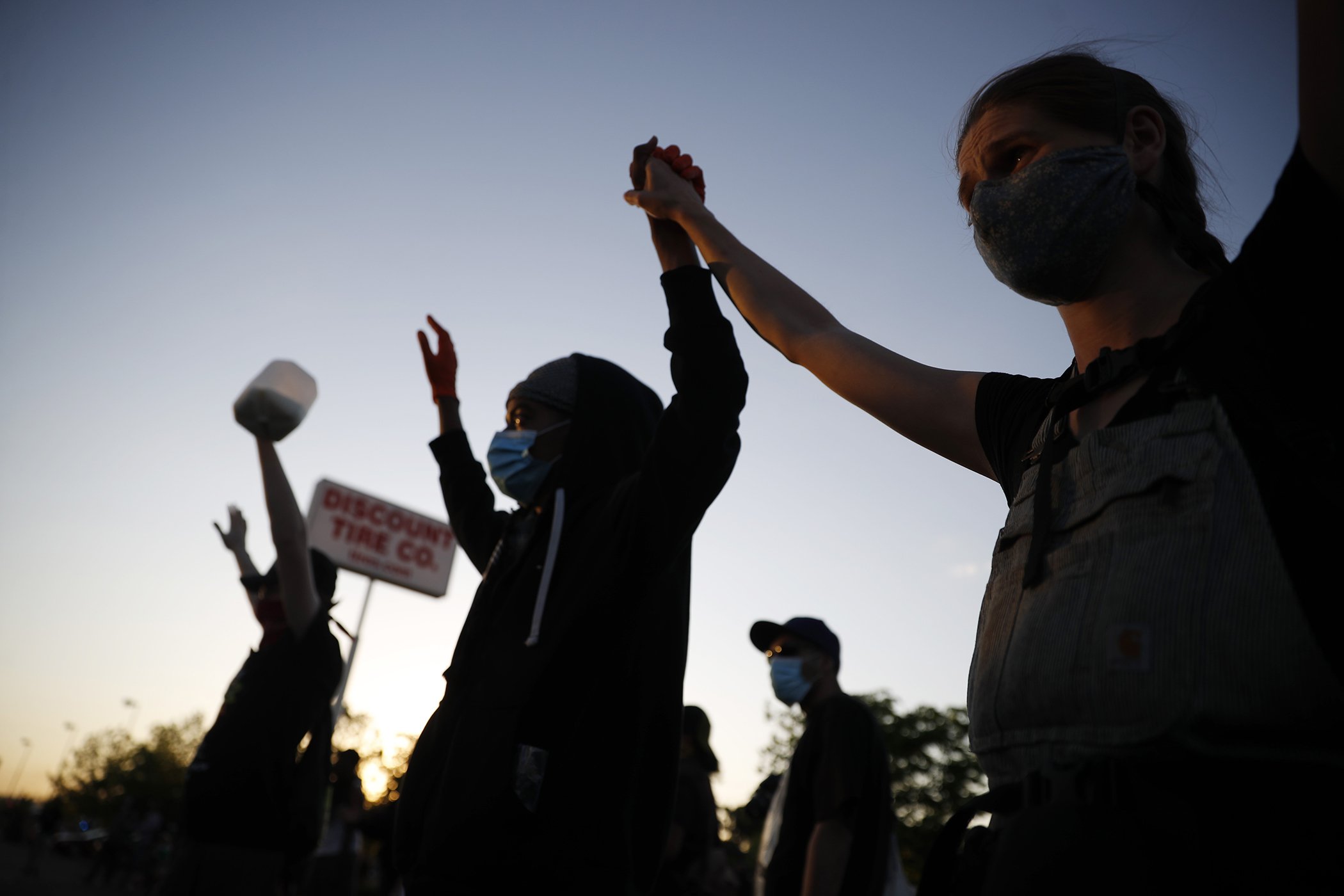 Demonstrators join hands Thursday, May 28, 2020, in St. Paul, Minn. Protests over the death of George Floyd, a black man who died in police custody, broke out in Minneapolis for a third straight night.
Image: John Minchillo/AP 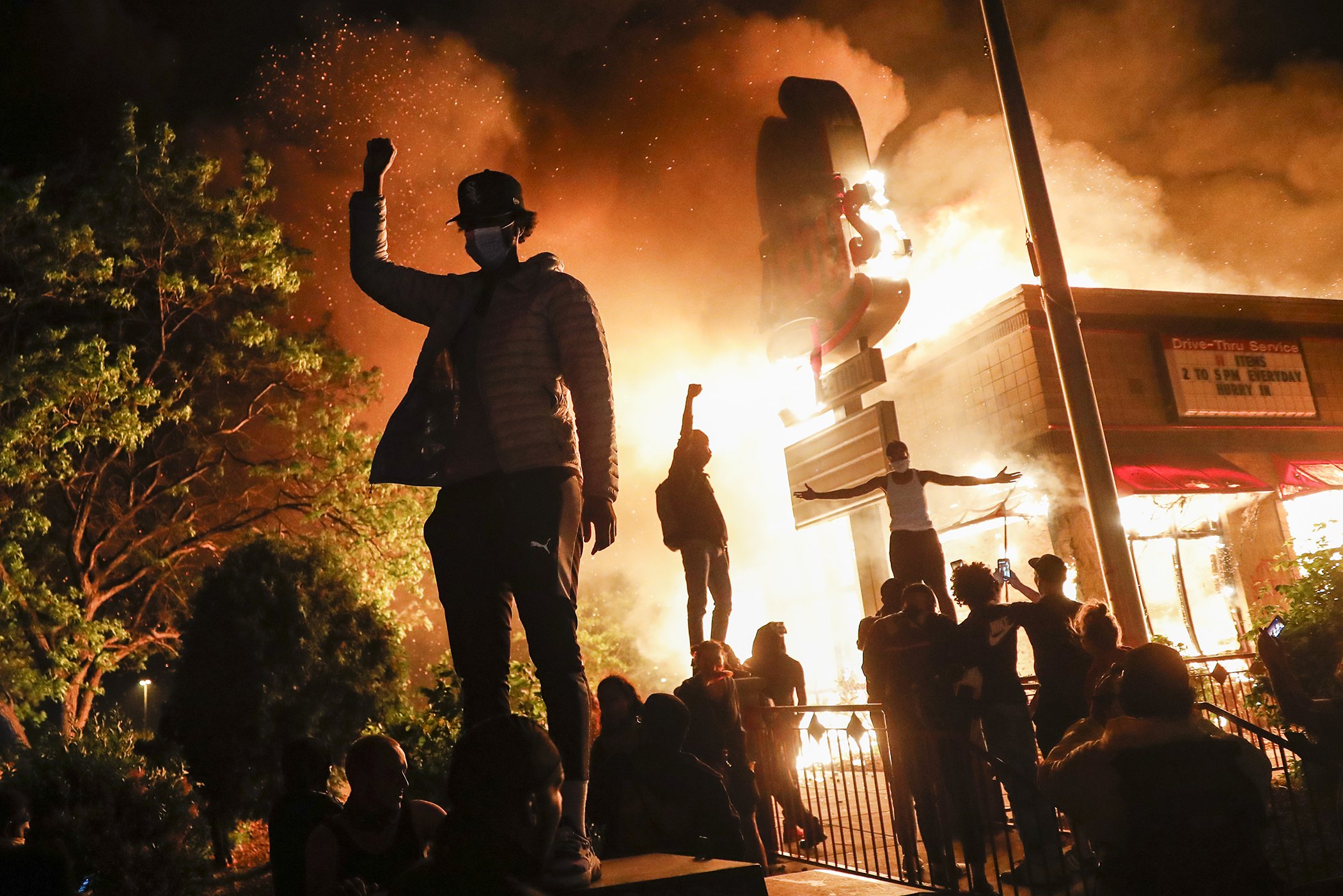 Protesters demonstrate outside of a burning fast food restaurant, Friday, May 29, 2020, in Minneapolis.
Image: John Minchillo/AP

Demonstrations in the US grew in numbers, drawing attention to several Black Americans killed weeks and days apart from Floyd. 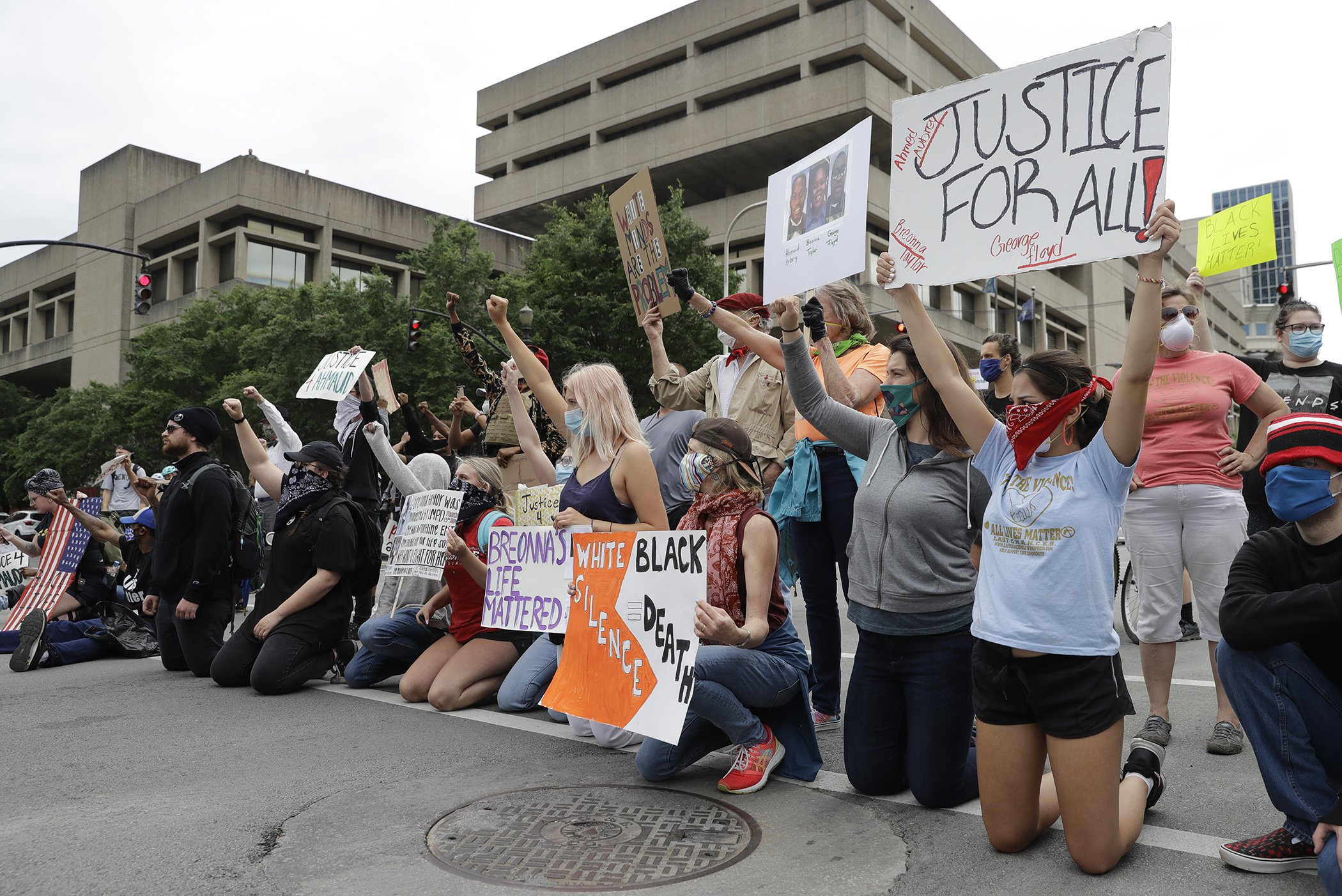 Protesters kneel in the middle of the street to block traffic as they protest the death of George Floyd and Breonna Taylor, May 29, 2020, in Louisville, Ky. Breonna Taylor, a black woman, was fatally shot by police in her home in March.
Image: Darron Cummings/AP 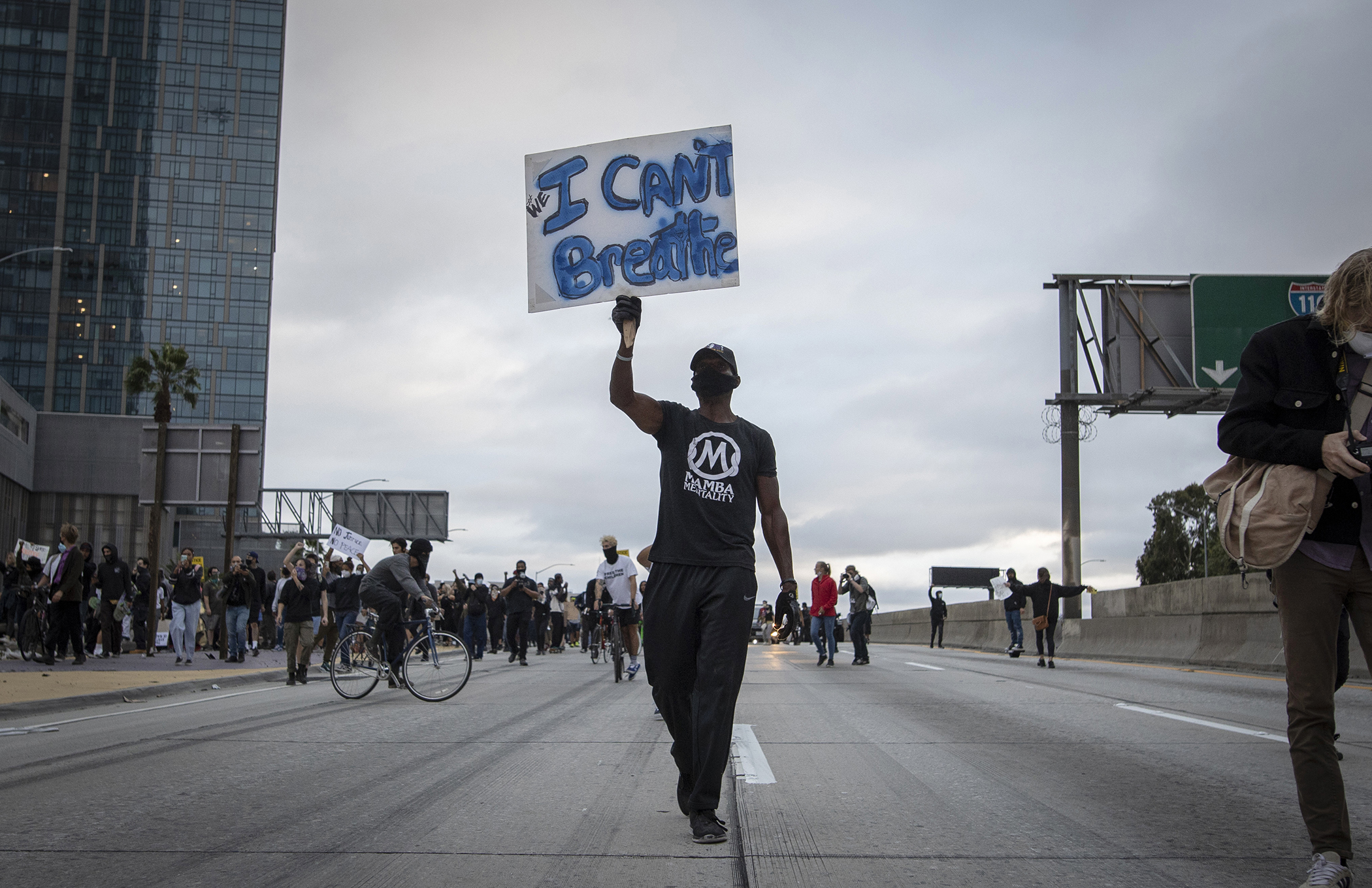 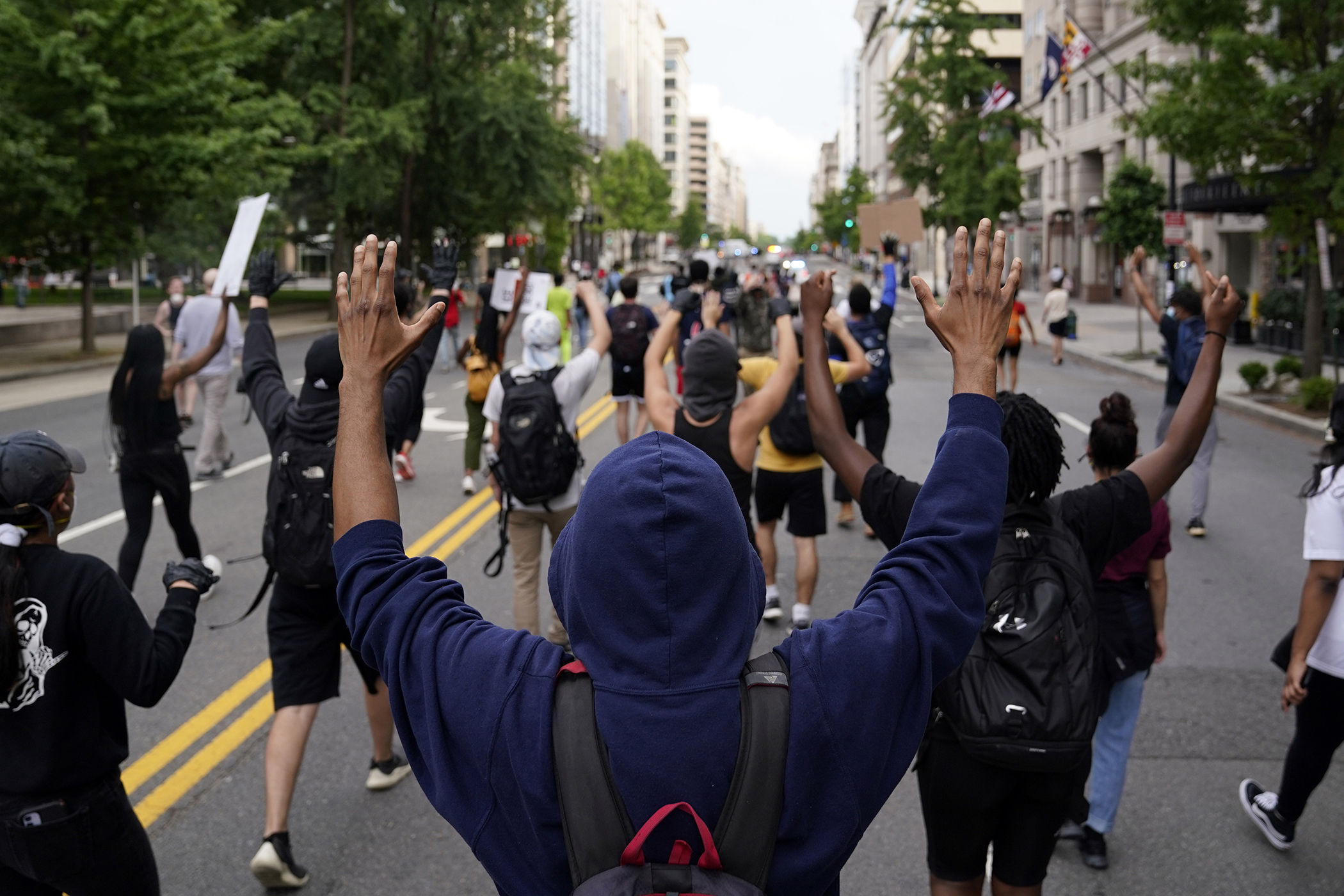 Washington, DC
Washington, DC.
Demonstrators protest the death of George Floyd, a black man who died in police custody in Minneapolis, May 29, 2020, in Washington.
Evan Vucci/AP 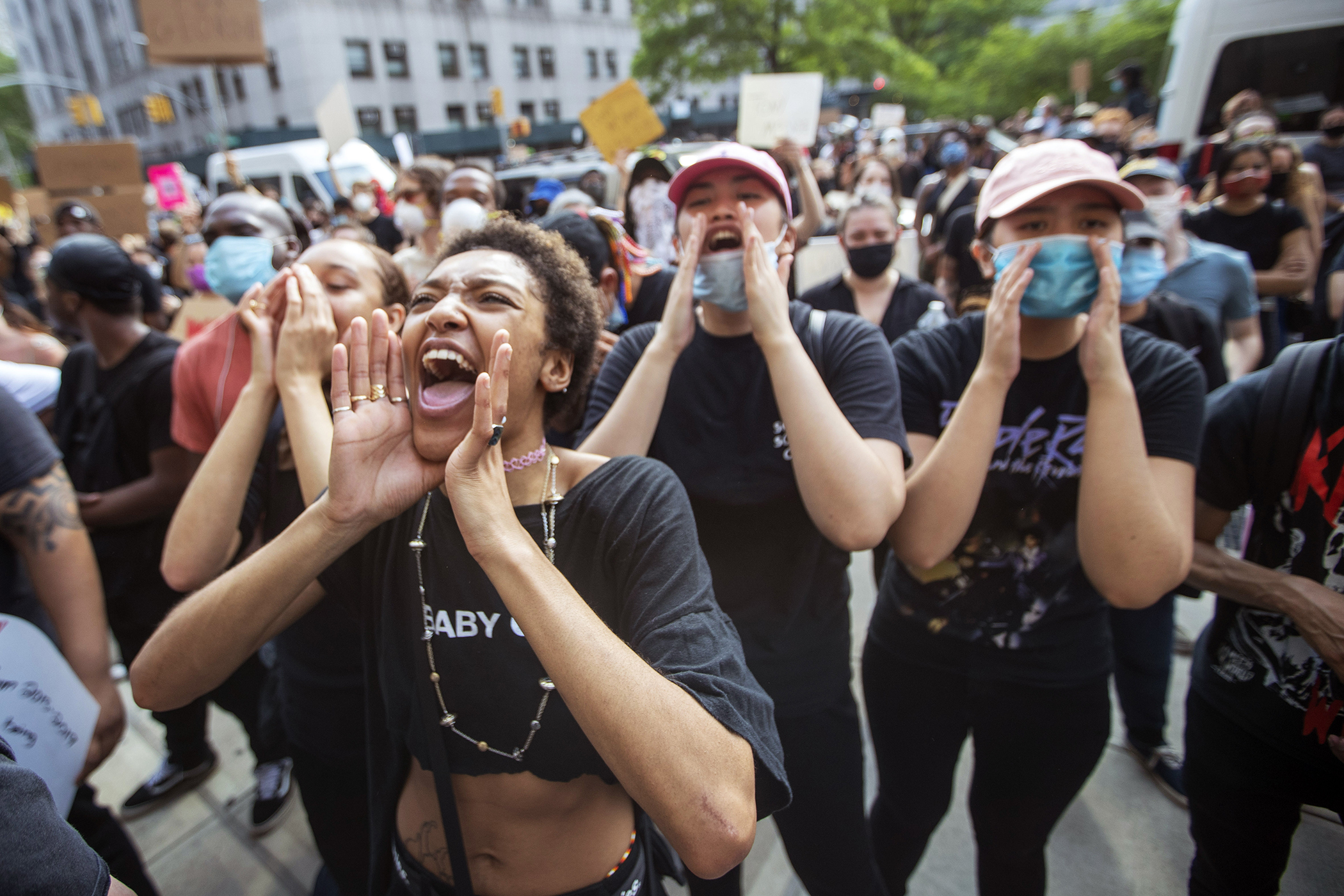 New York
New York.
Protesters demonstrate against the the death of George Floyd, a black man who was in police custody in Minneapolis, May 29, 2020, in New York.
Mary Altaffer/AP 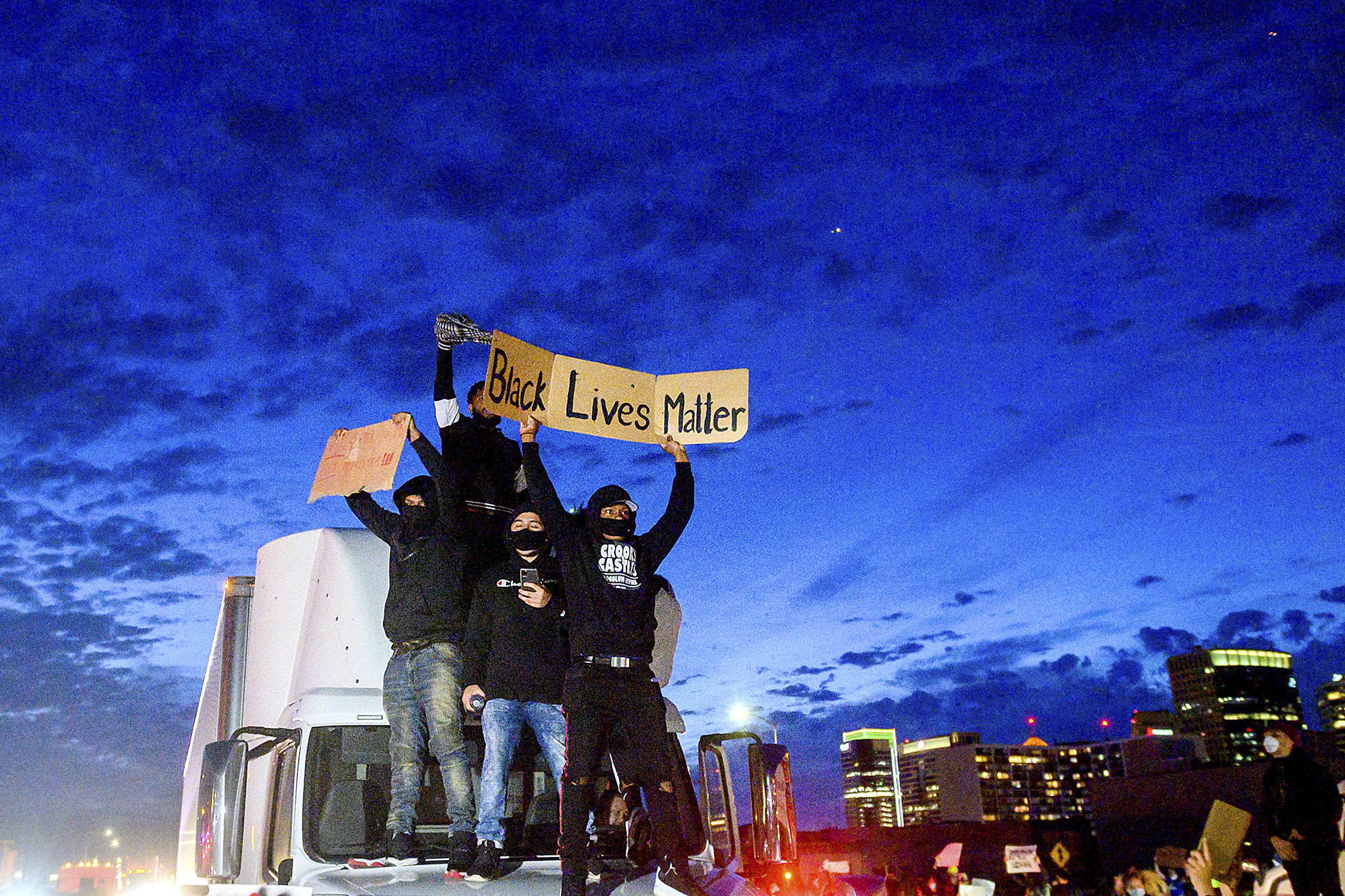 Oakland
Oakland.
Demonstrators climb atop a truck while blocking all lanes of traffic on Interstate 880 in Oakland, Calif., on May 29, 2020, while protesting the Monday death of George Floyd.
Noah Berger/AP 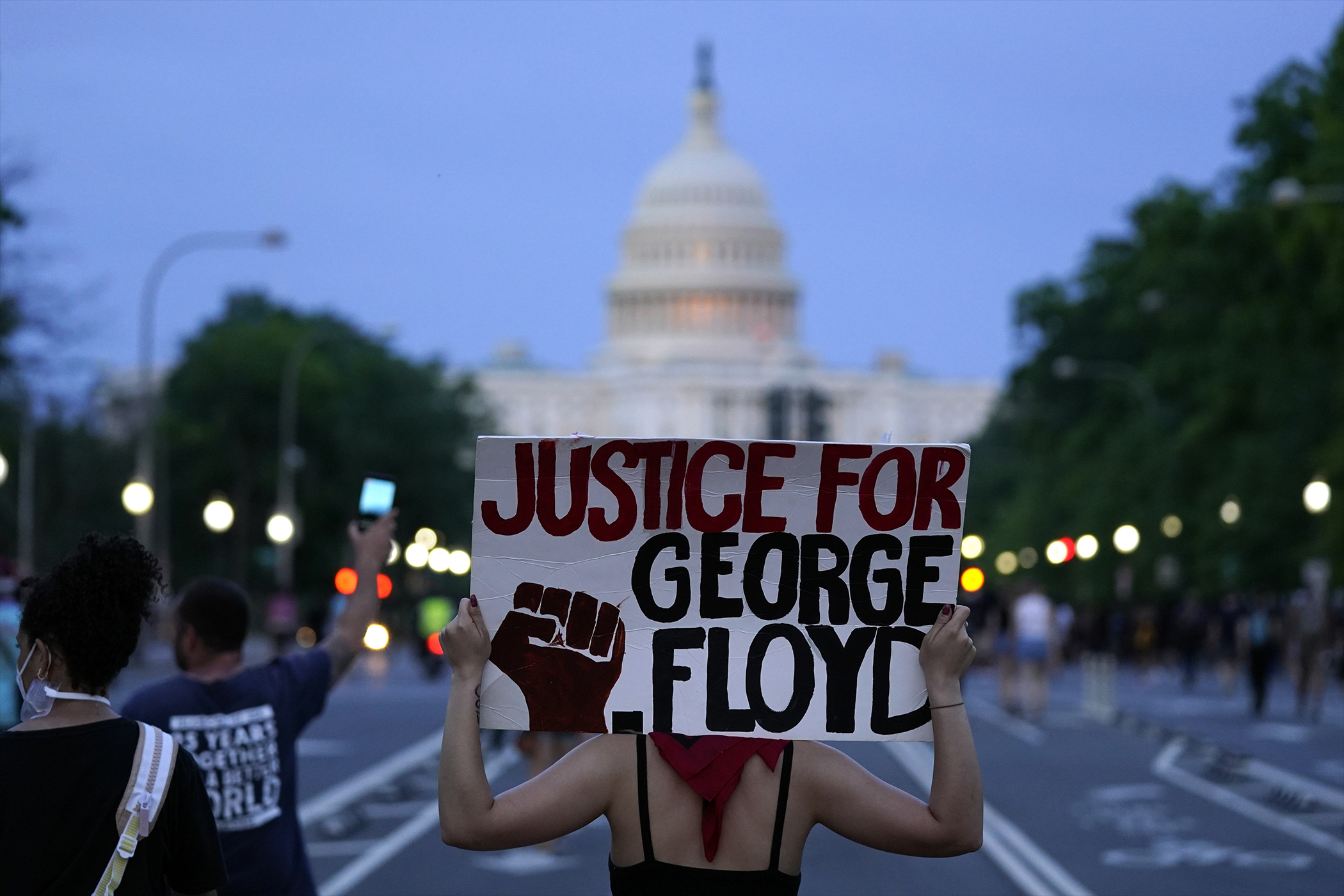 Washington, DC
Washington, DC.
Demonstrators walk along Pennsylvania Avenue as they protest the death of George Floyd, a black man who died in police custody in Minneapolis, May 29, 2020, in Washington, DC.
Evan Vucci/AP

Protests continued in cities across the US and police violence against protesters escalated. 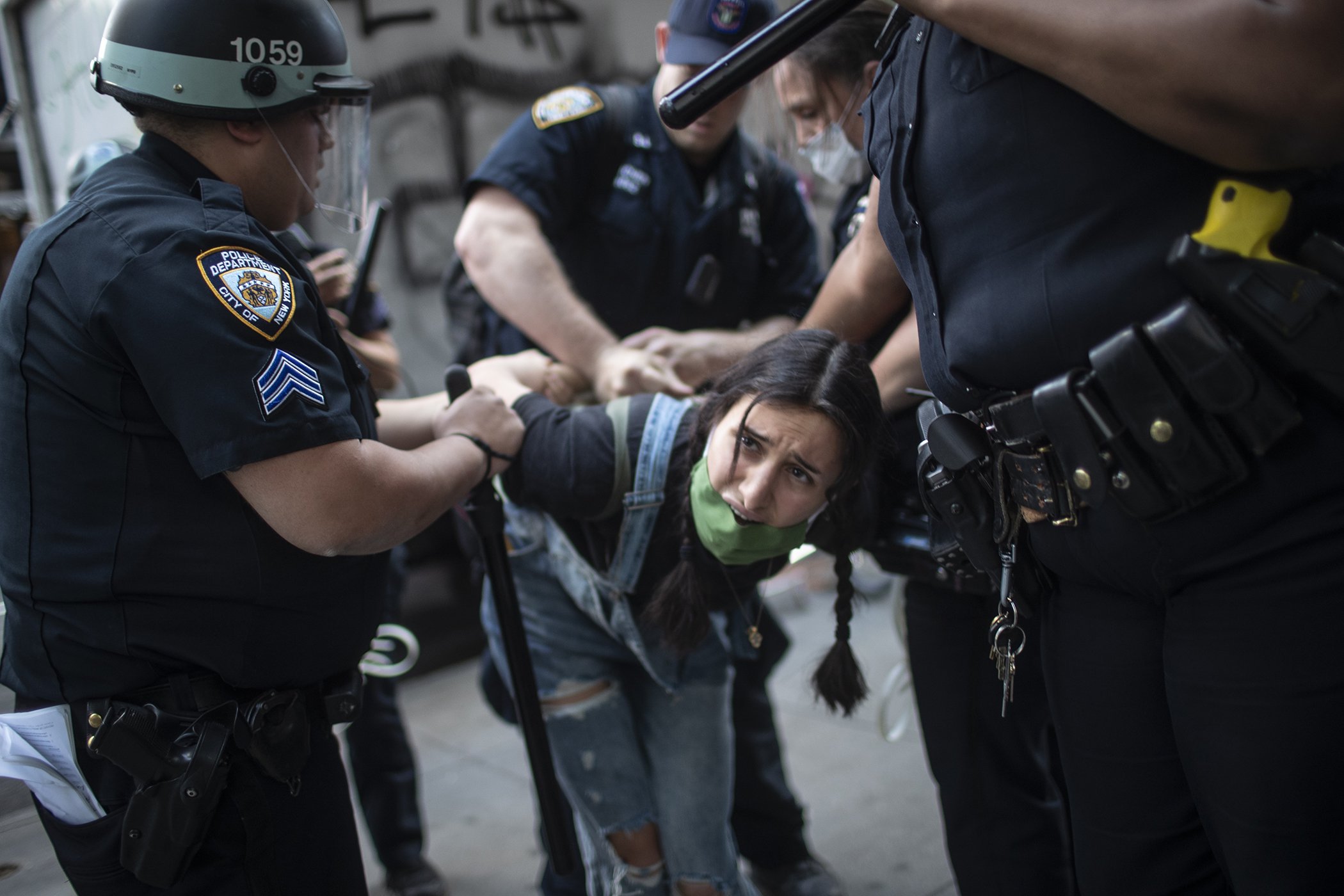 Police detain a protester during a solidarity rally for George Floyd, Saturday, May 30, 2020, in New York.
Image: Wong Maye-E/AP 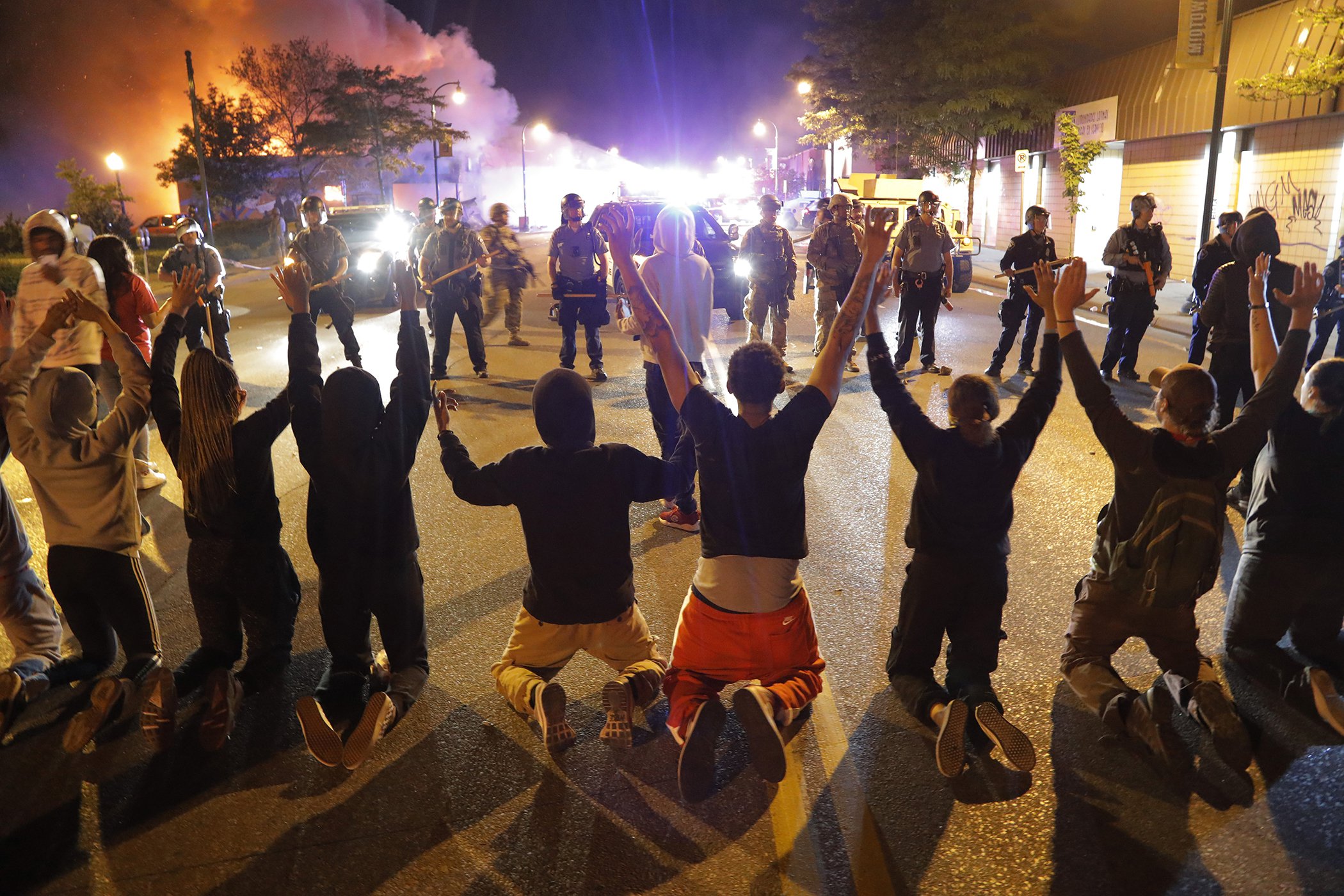 By May 31, protesters in 75 cities across the US were calling for policy changes to break down systemic racism. National Guard troops posted up in more than 20 states and mayors in cities across the country started imposing curfews. 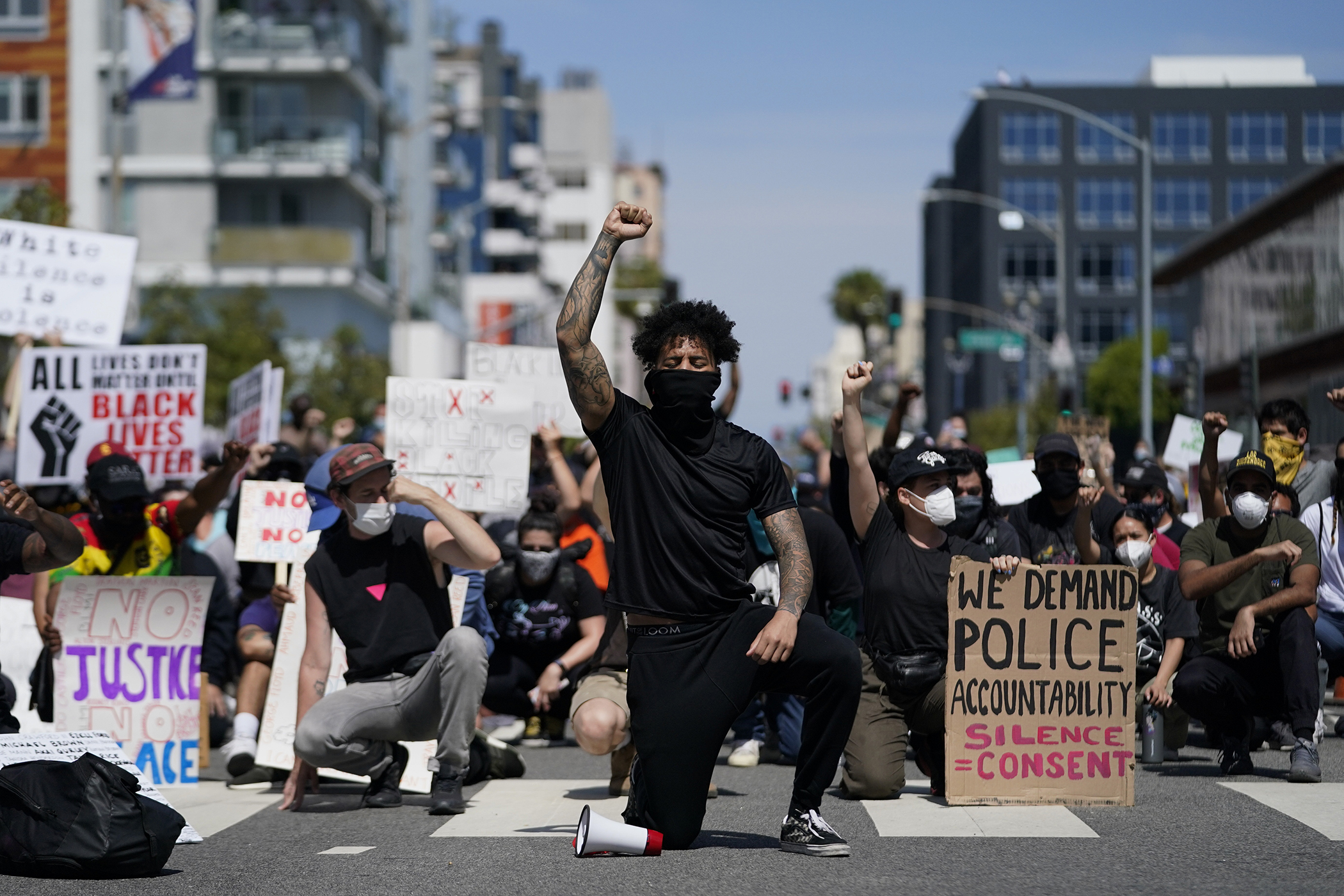 Long Beach
Long Beach.
Demonstrators kneel in a moment of silence outside the Long Beach Police Department on May 31, 2020, in Long Beach during a protest over the death of George Floyd.
Ashley Landis/AP 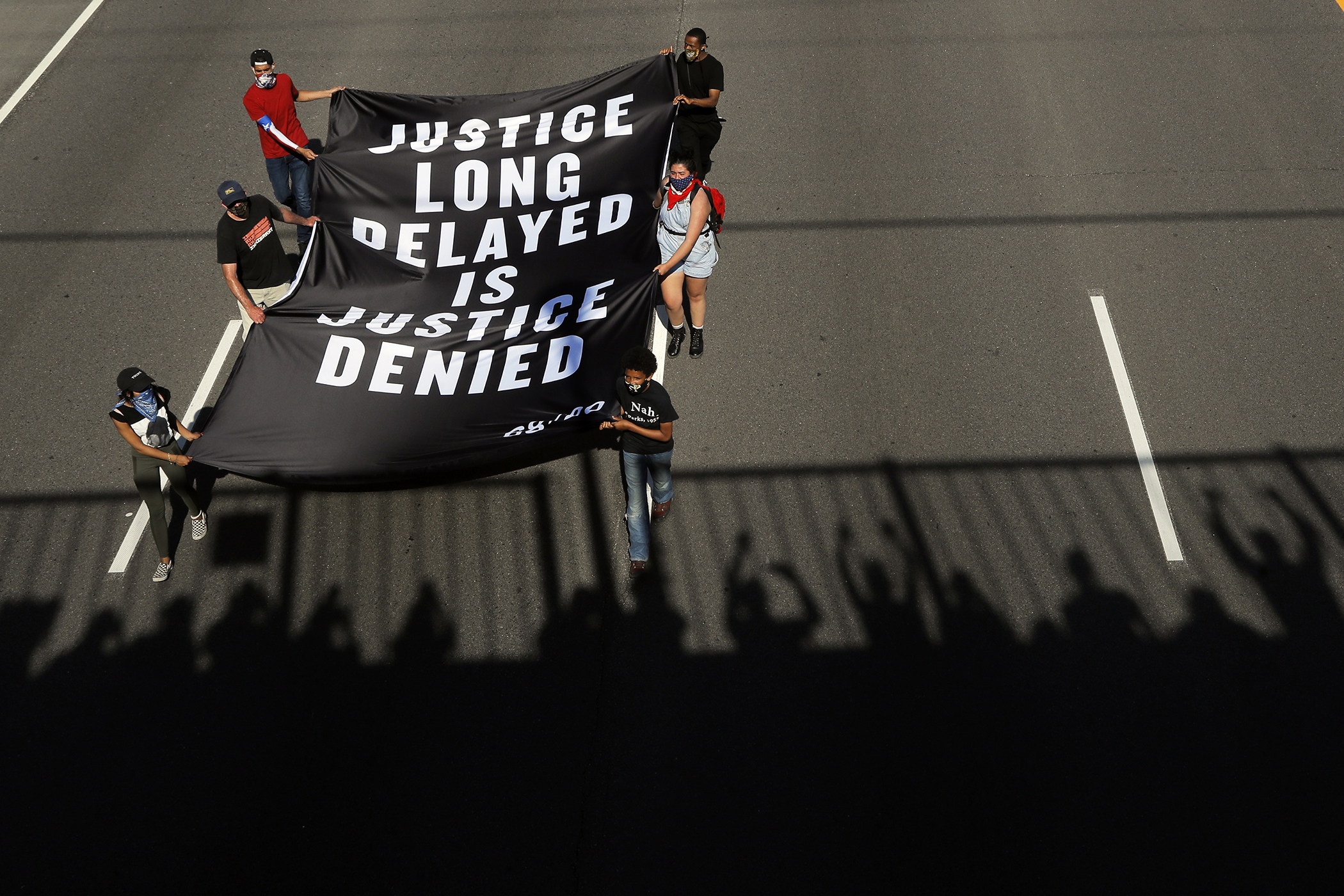 Minneapolis
Minneapolis.
Demonstrators march along an interstate highway, May 31, 2020, in Minneapolis.
Julio Cortez/AP 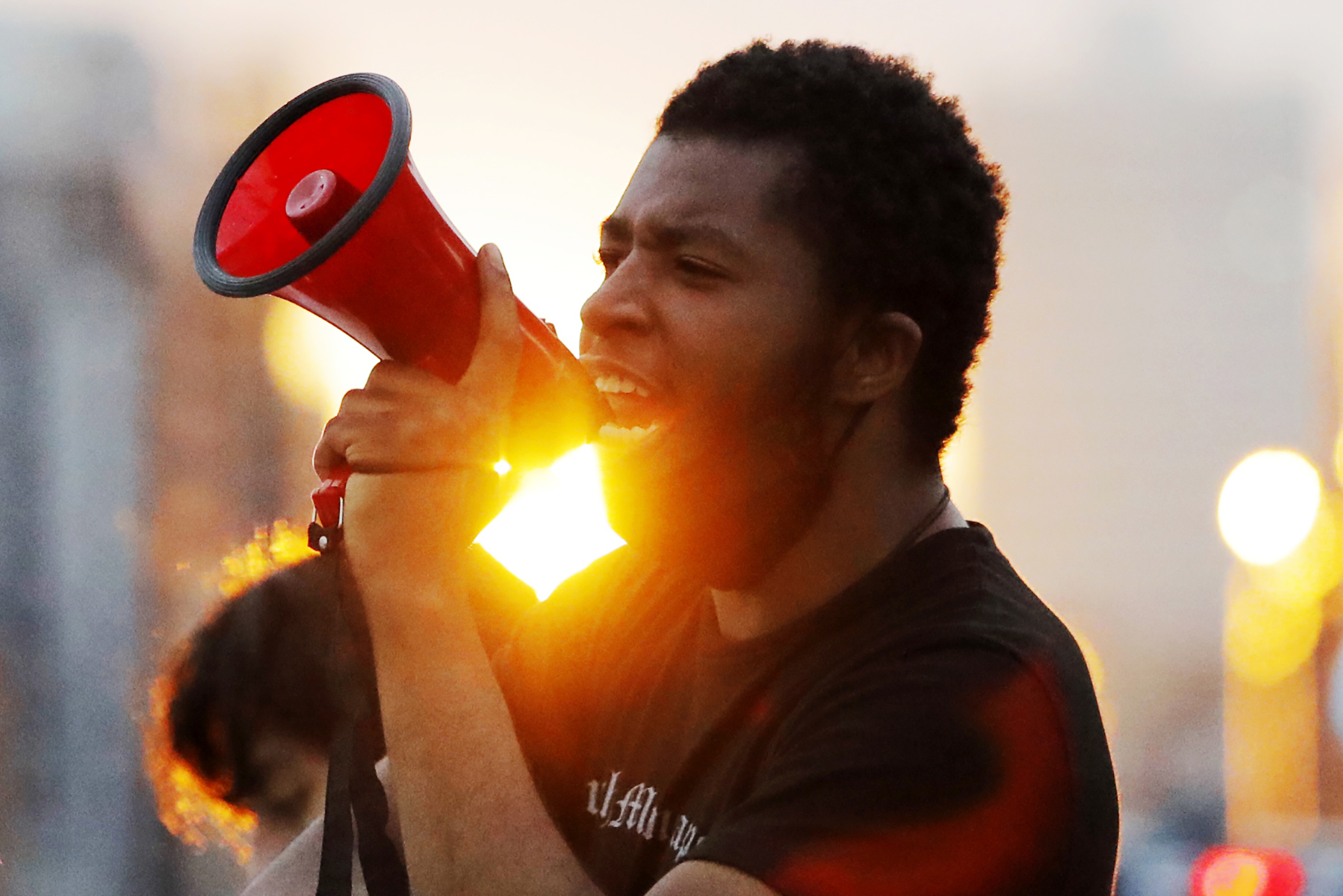 Minneapolis
Minneapolis.
A protest leader chants with demonstrators Sunday, May 31, 2020, after curfew in Minneapolis.
Julio Cortez/AP

Police officers used tear gas and rubber bullets to break up peaceful protests by the White House in Washington, DC. 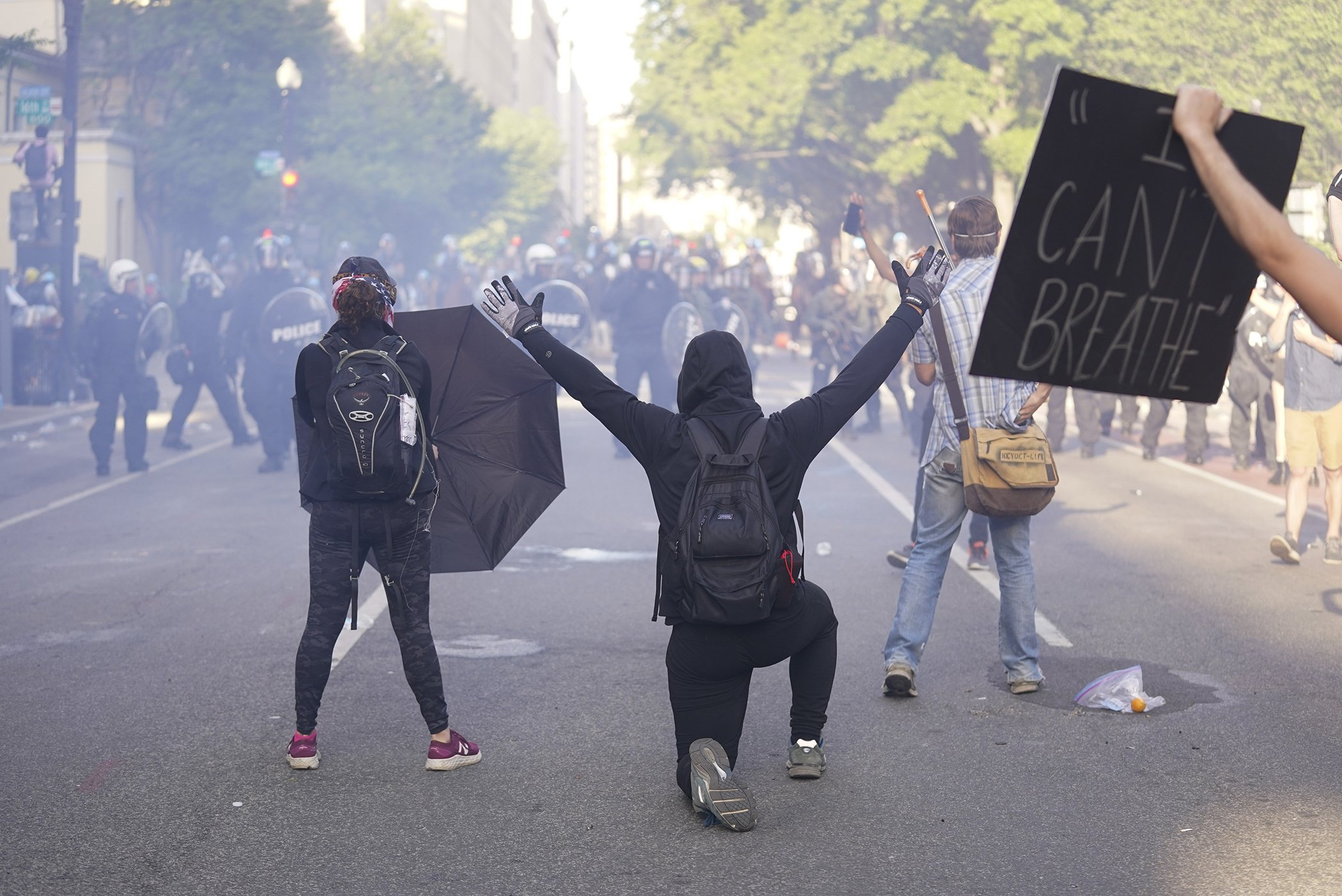 Demonstrators kneel in front of a line of police officers during a protest for the death of George Floyd, Monday, June 1, 2020, near the White House in Washington, DC.
Image: Evan Vucci/AP 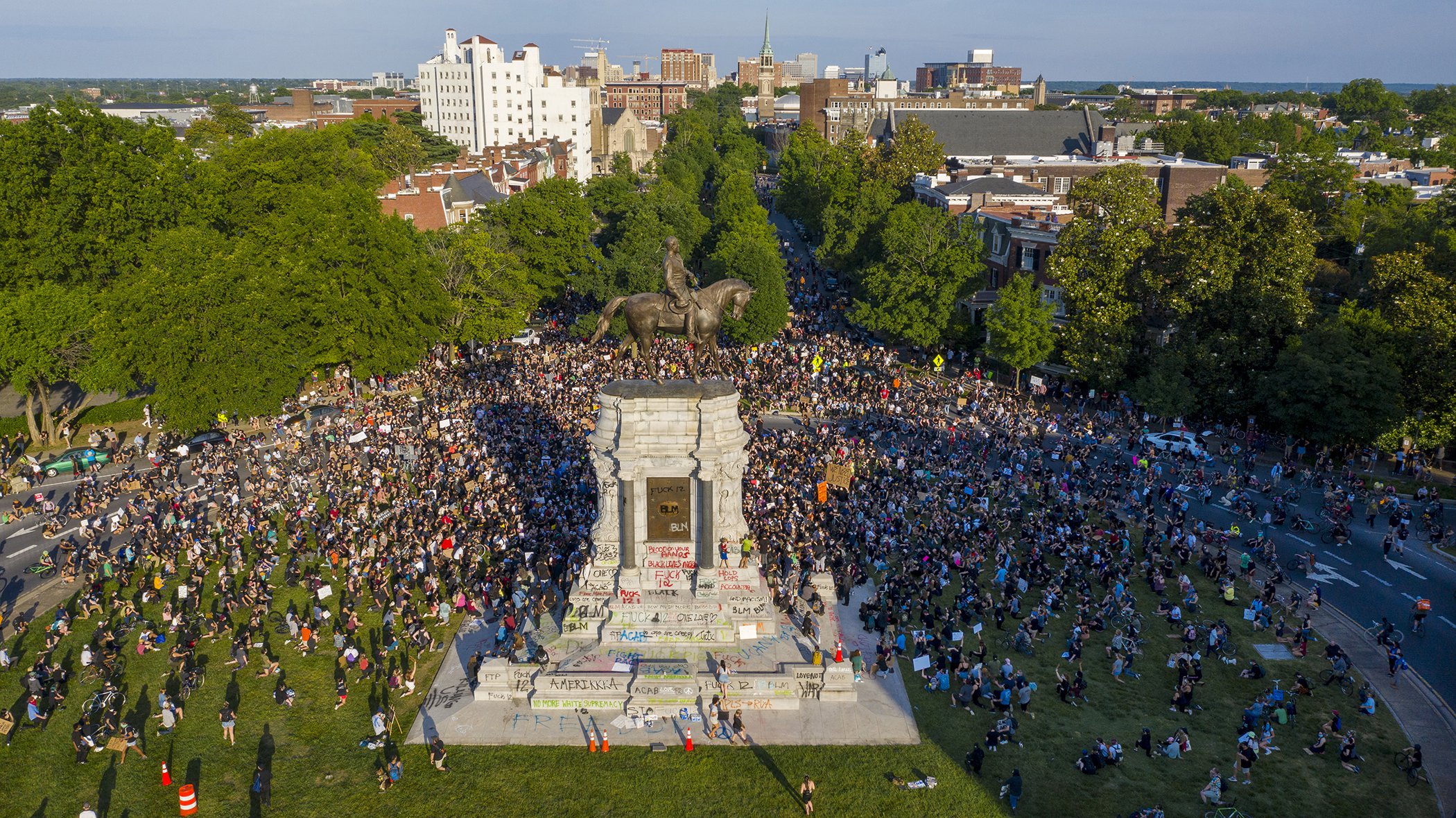 In this photo taken with a drone, a large group of protesters gather around the statue of Confederate General Robert E. Lee on Monument Avenue near downtown, June 2, 2020, in Richmond, Va. The crowd protesting police brutality chanted "Tear it down."
Image: Steve Helber/AP

Marchers in Sydney, Australia, rallied in support of Black Lives Matter and called for the country to stop imprisoning Indigenous people at disproportionately higher rates than anyone else.

Protesters continue to mourn and pay tribute to Floyd with vigils and memorials across the US. 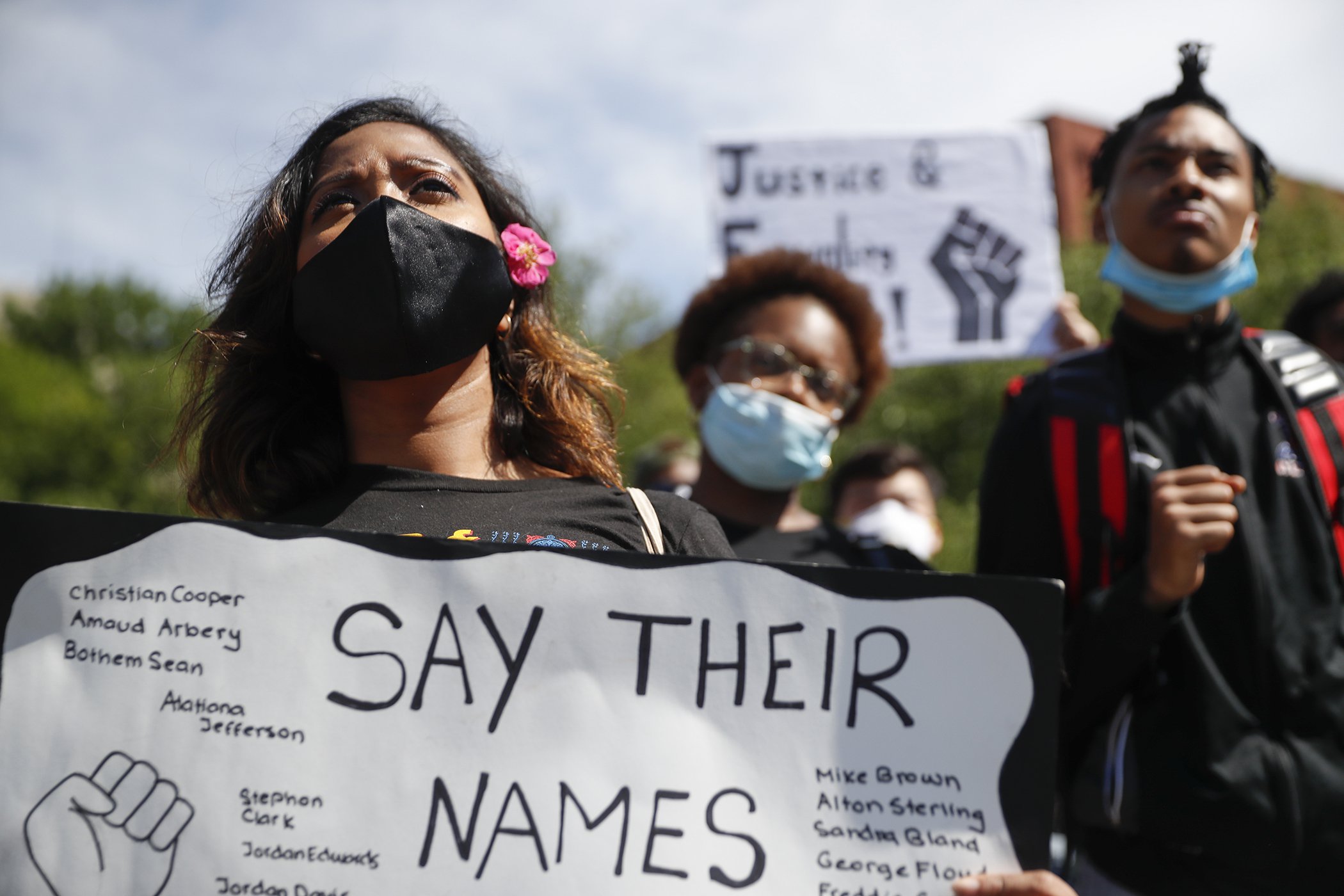 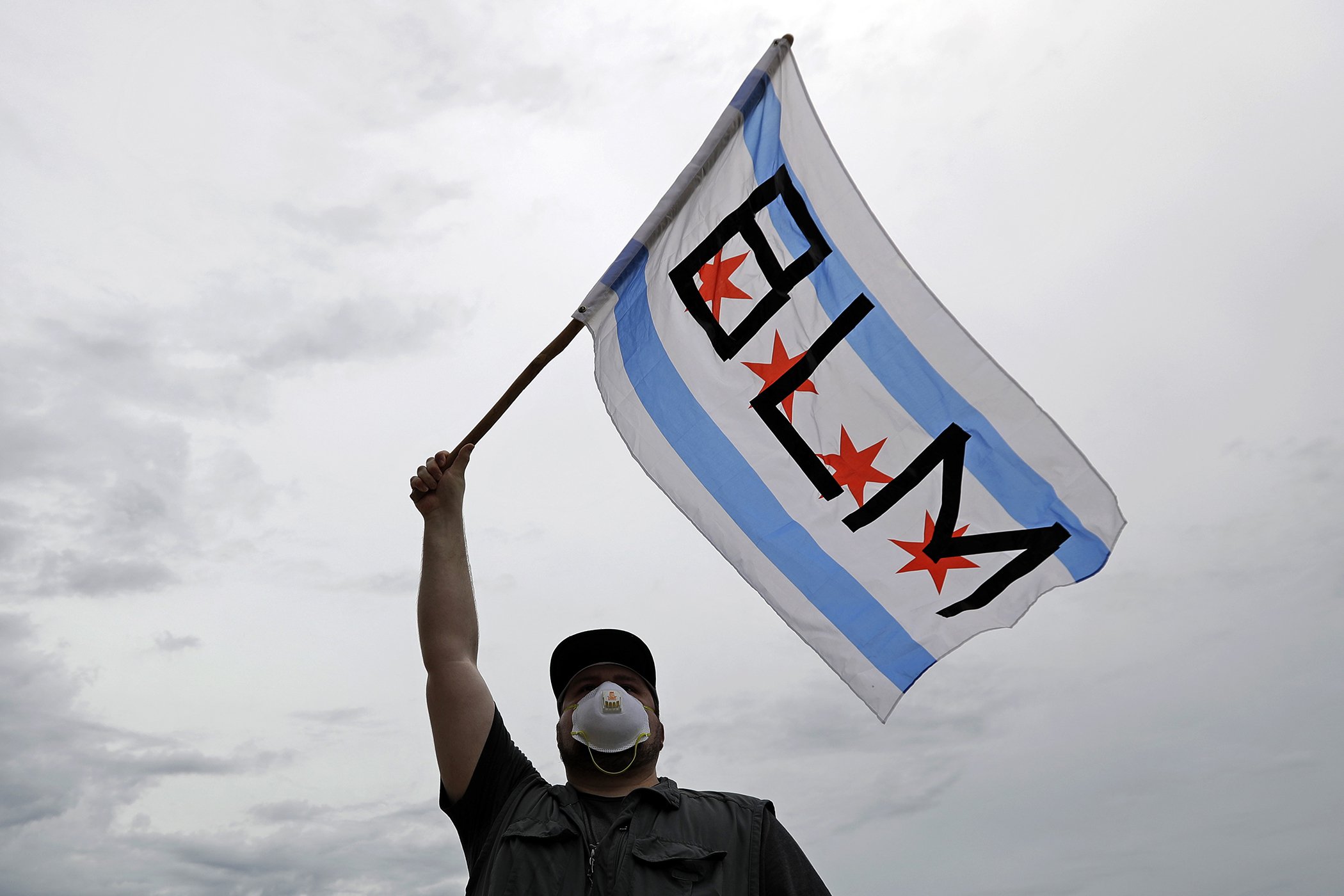 A protester waves a city of Chicago flag emblazoned with the acronym BLM for Black Lives Matter, outside the Batavia, Ill., City Hall during a protest over the death of George Floyd, on June 3, 2020.
Image: Nam Y. Huh/AP

Demonstrators throughout the US celebrated the birthday of Breonna Taylor, a Black American woman who would’ve turned 27 on June 5, had she not been killed by Louisville police on March 13. 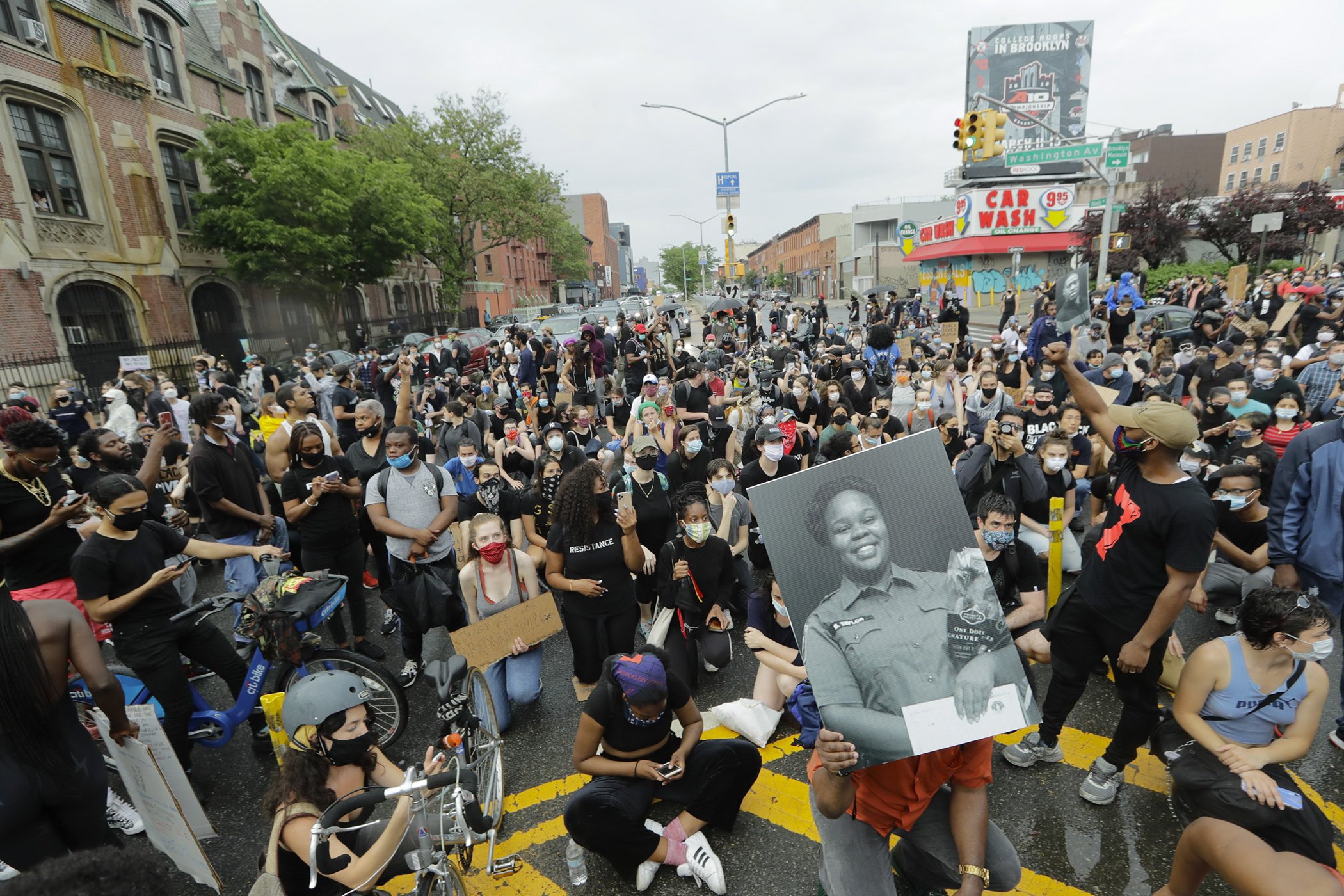 A man holds a photograph of Breonna Taylor on her birthday as he kneels with other protesters on during a rally for George Floyd on June 5, 2020, in the Brooklyn, New York. Taylor, a black woman, was fatally shot by police in her home in March.
Image: Frank Franklin II/AP 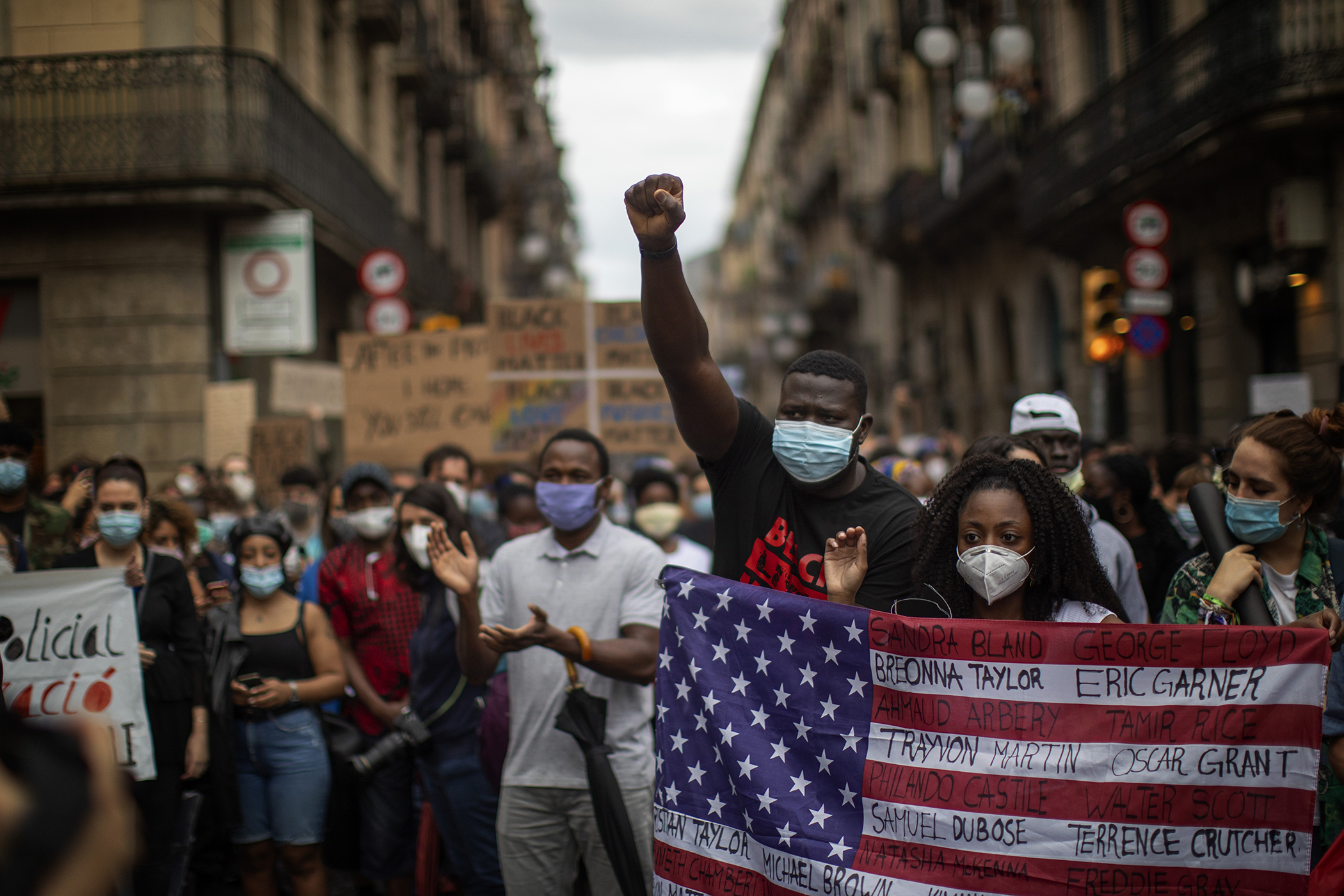 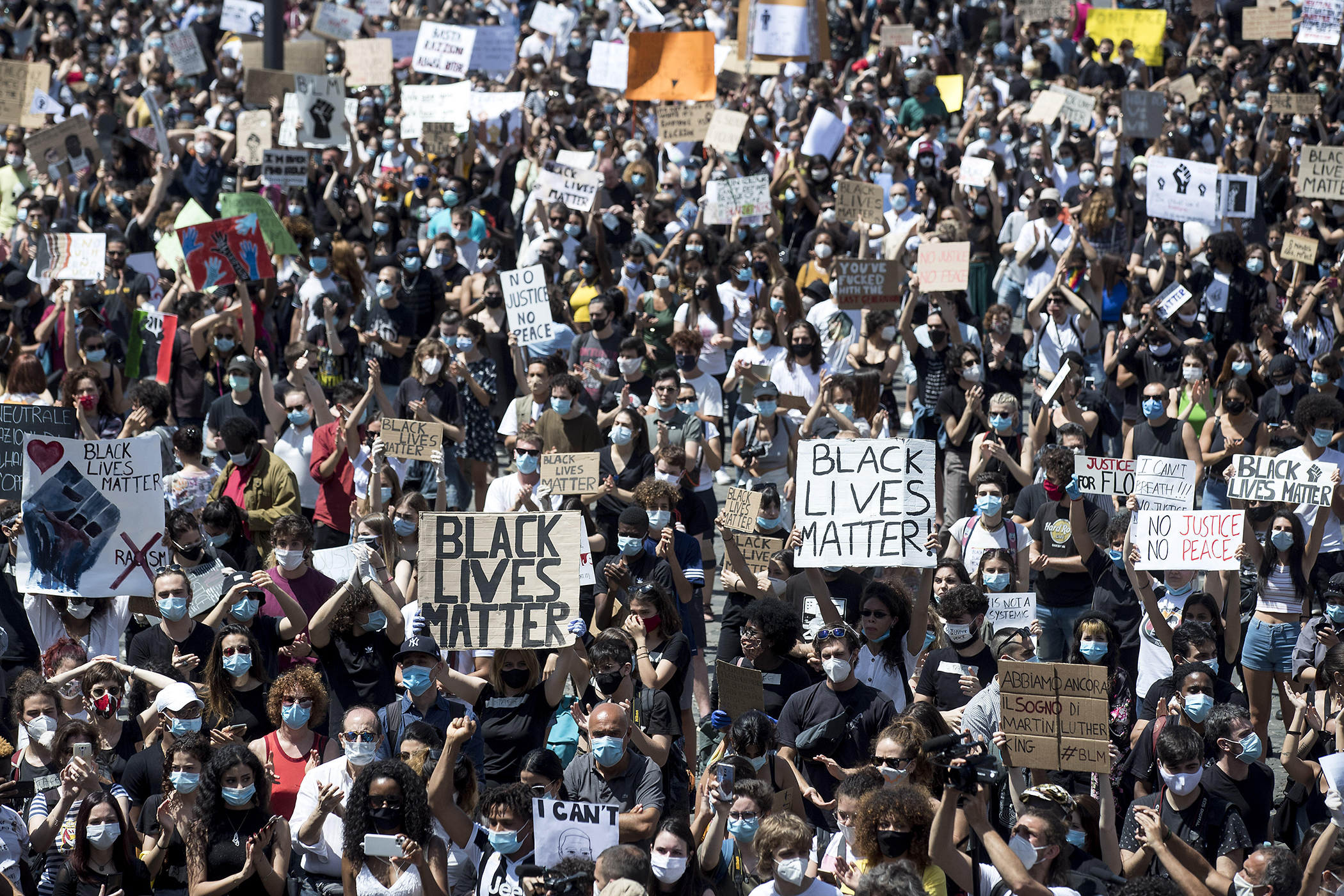 Italy
Rome, Italy
People gather calling for justice for George Floyd in Rome's Piazza del Popolo square, June 7, 2020. People have been protesting throughout Italy to denounce the police killing of George Floyd and show solidarity with anti-racism protests in the US and elsewhere.
Roberto Monaldo/LaPresse/AP 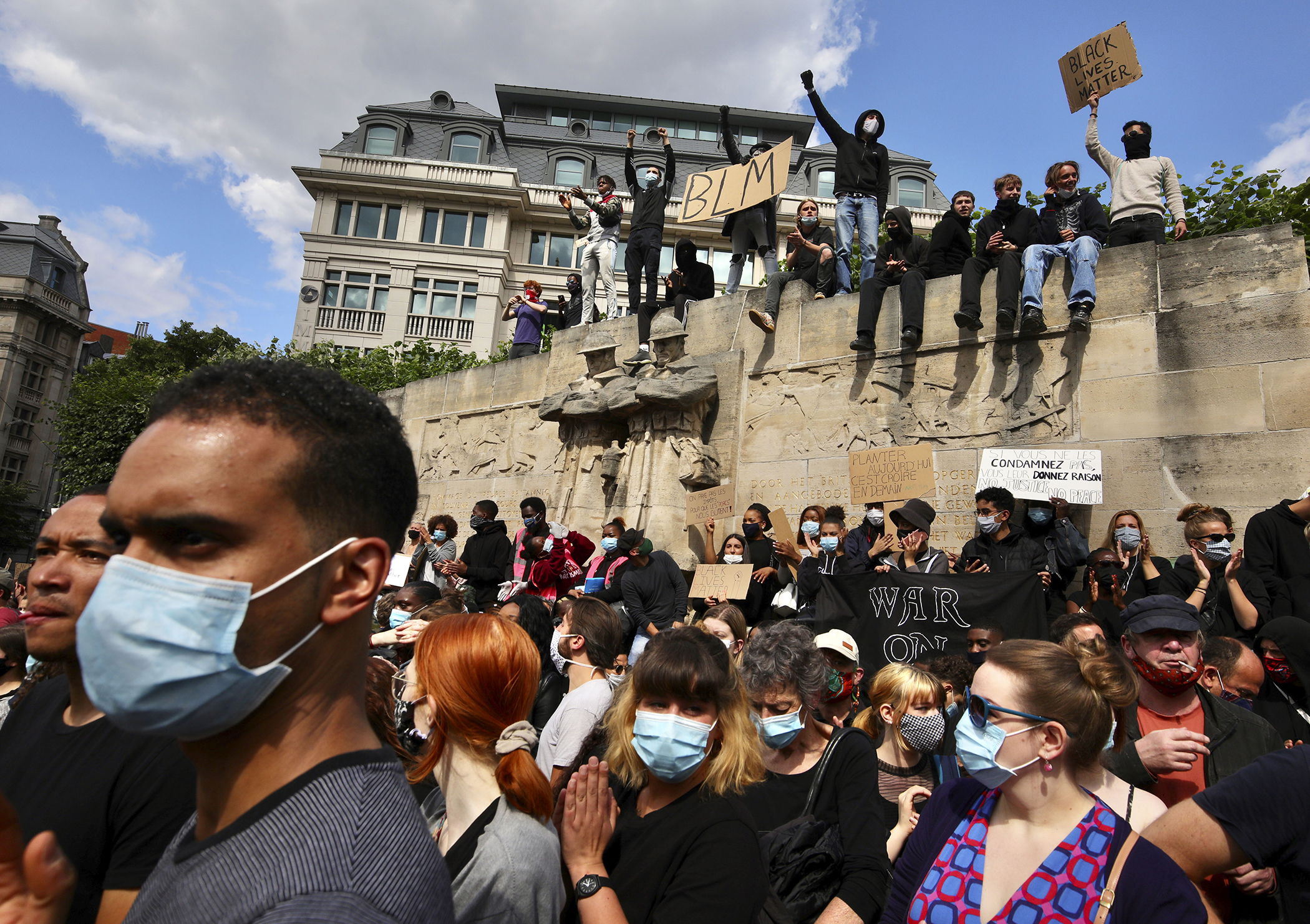 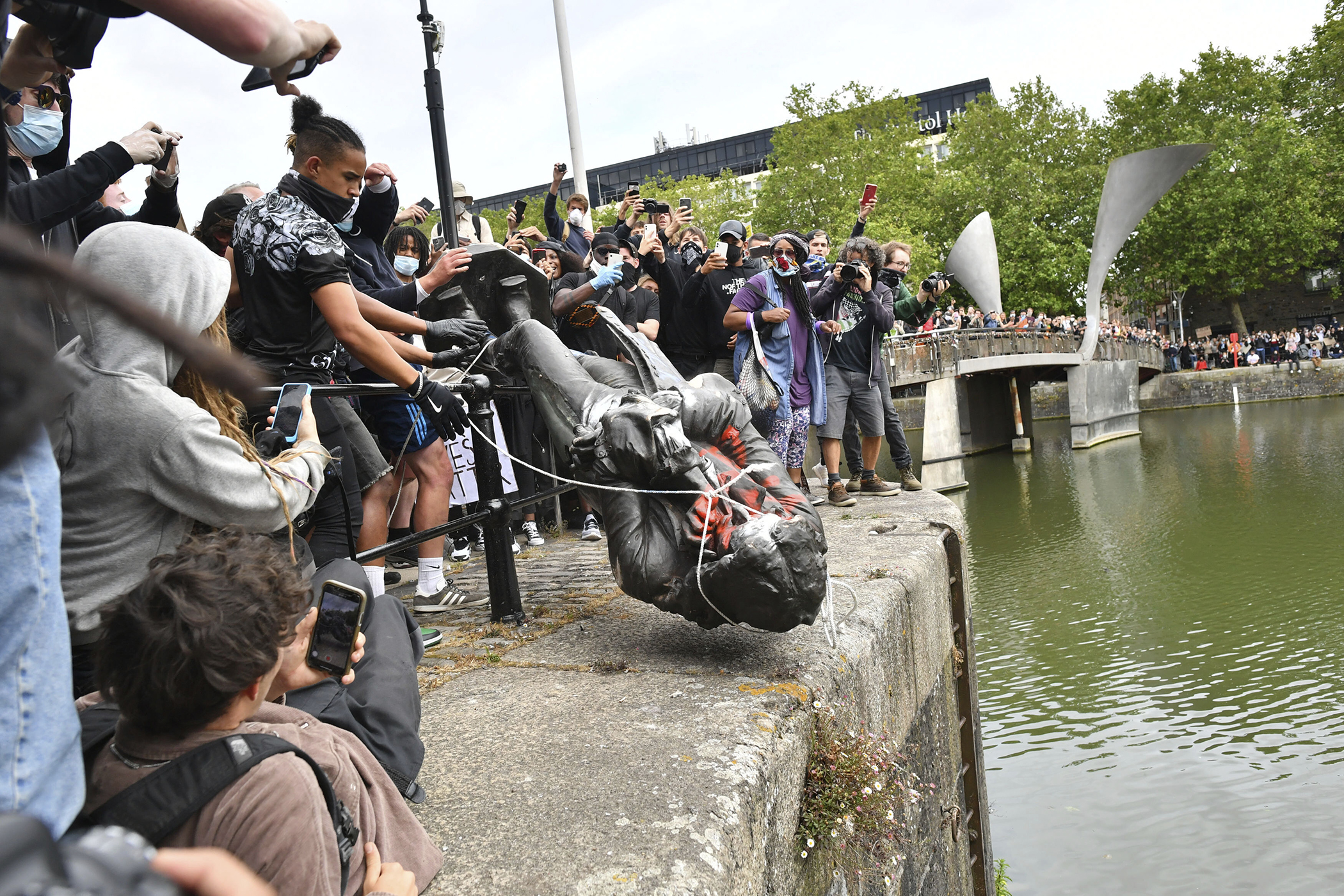 Up to 200 people in Nairobi, Kenya marched against the rise of police brutality amid curfews set to prevent the spread of COVID-19. 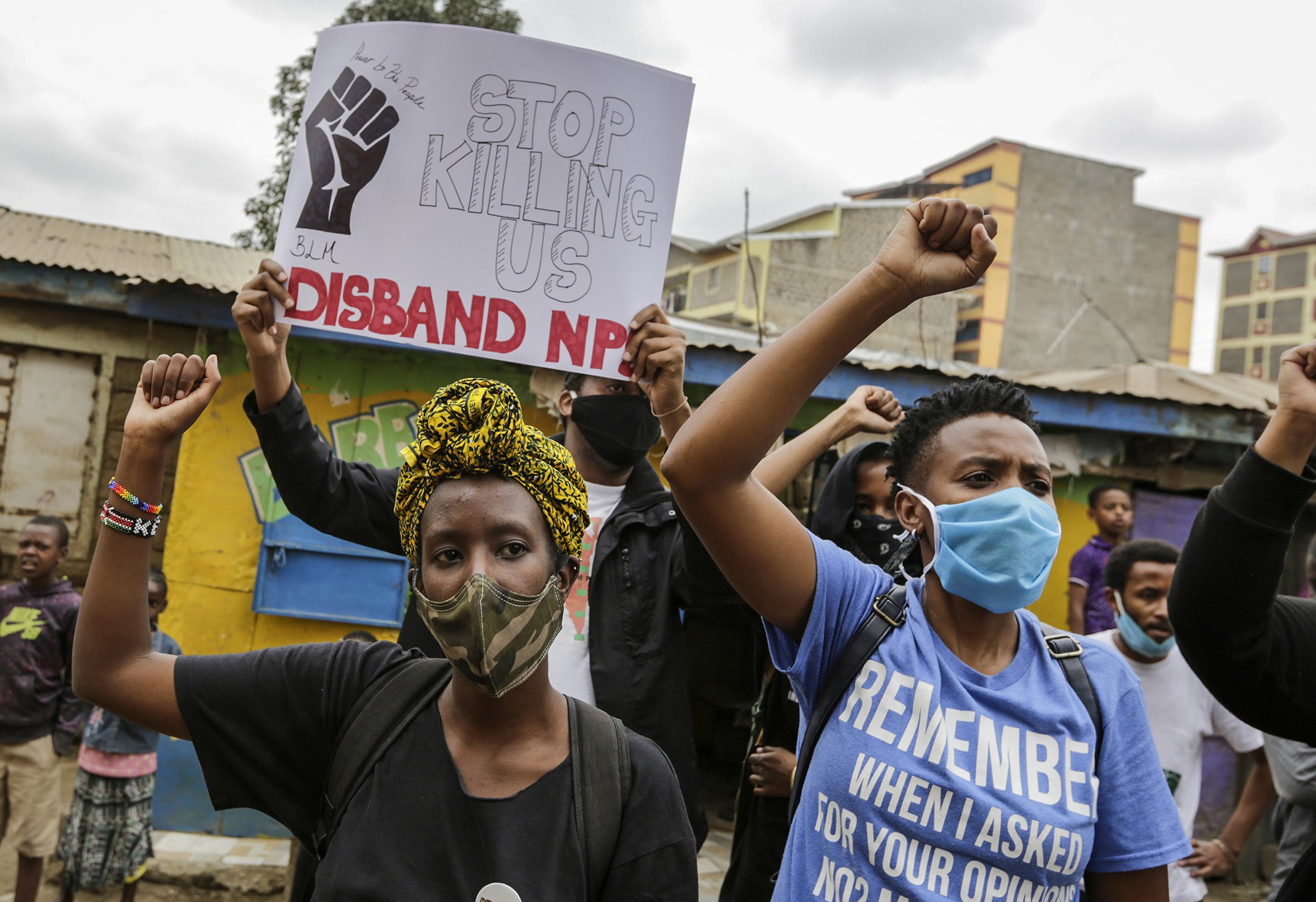 During the 2016 National Football League (NFL) preseason, former San Francisco 49ers quarterback Colin Kaepernick began to kneel during the national anthem to draw attention to police brutality against Black Americans and other racial injustices. Kaepernick continued kneeling throughout the season, despite receiving criticism for protesting.

In the wake of protests in solidarity with Floyd, the NFL issued an apology for previously condemning protests against racial inequality on the field. Football and rugby teams around the world honored the symbolic gesture by kneeling before games.

About 3,500 protesters joined a demonstration in Tokyo, Japan calling for an end to racial discrimination and police brutality. 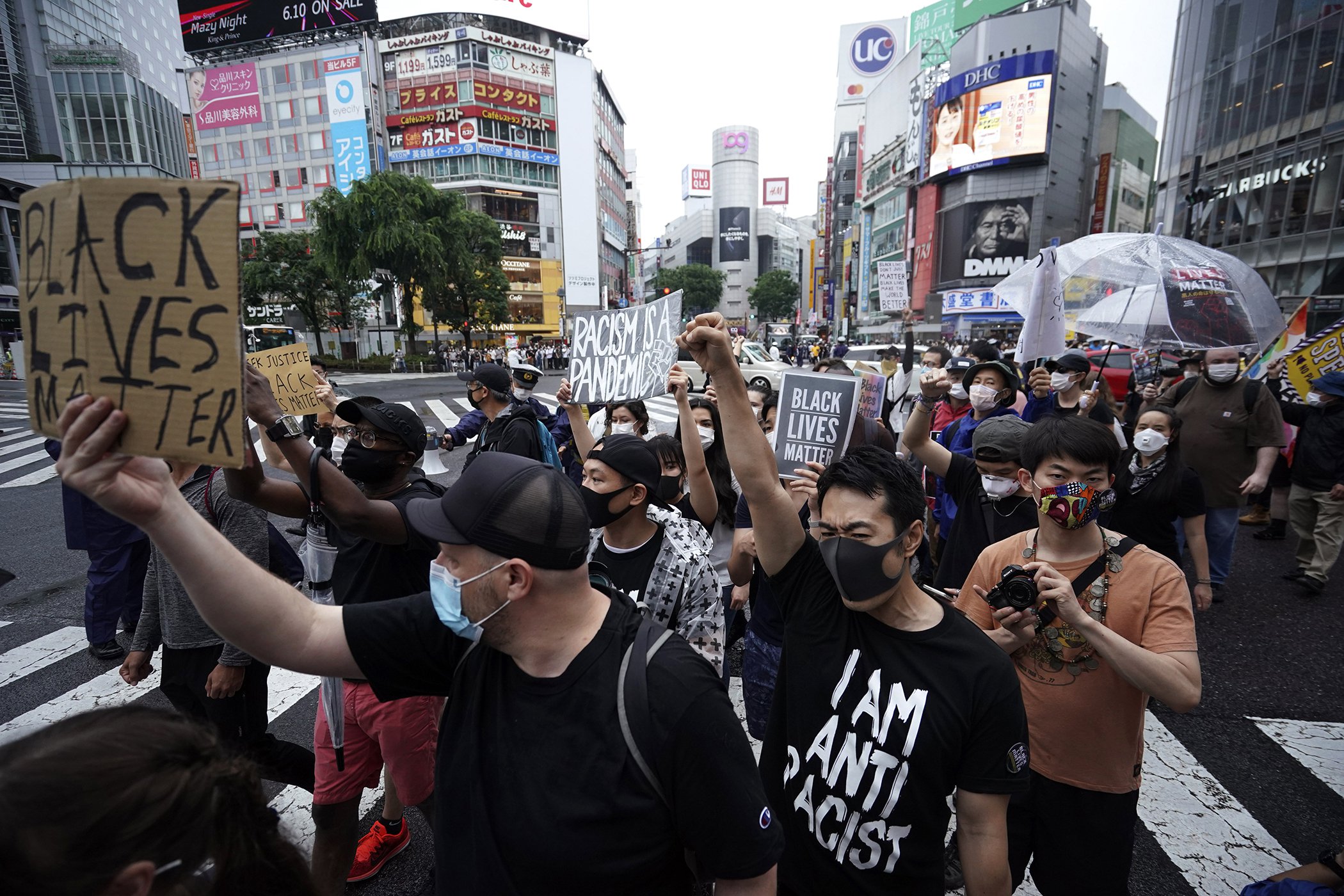 The murder of Rayshard Brooks, a 27-year-old Black American by a white police officer in Atlanta, Georgia on June 12, sparked protests to call for an end to Georgia's citizen's arrest law that allows anyone to make an arrest if they witness a crime.

Following the murders of two trans women — Dominique "Rem'mie" Fells, 27, of Philadelphia, Pennsylvania, and Riah Milton, 25, of Cincinnati, Ohio — tens of thousands of people wearing white in solidarity joined protests in the US.