“Debt. It’s the reason Nicolas Cage has made so many great choices in recent years…”

From the second John Oliver started his segment about debt buyers in the United States last night, everyone knew it was going to be a good one, but as regular viewers of Last Week Tonight know, nobody could guess how it would end.

Near the end of the segment, which provided a damning portrait of the debt buying industry, Oliver claimed that “Any idiot can get into it, and I can prove that to you, because I’m an idiot and I started a debt buying company and it was disturbingly easy.”

Oliver then proceeded to detail how with $50 and knowledge of the law he was able to successfully apply online to create a debt buying company named “Central Asset Recovery Professionals,” or as Oliver put it, “CARP” named after “a bottom-feeding fish.”

After setting up a rudimentary website for CARP, the satirical, but still real company was offered a $15 million package of medical debt for $60,000.

Oliver explained that the debt was out of statute, which means it is the kind of debt that a collector can only continue to collect, but not sue the debtor for.

Then, instead of chasing down the 9,000 debtors in the debt package as a normal collection agency would, Oliver decided to stage the largest one-time giveaway in television history and work with the nonprofit RIP Medical Debt to forgive the $15 million with no consequences for the debtors.

The answer was Jeff the Diseased Lung in a Cowboy Hat, and he was a hit.

Unlike other news and current events programs, John Oliver uses his time to dive into less popular topics and dedicate a full 20 minutes to in-depth explorations of them in each of his weekly episodes, often culminating in some humorous call to action or moment of activism from Oliver and his team.

This most recent stunt reaffirmed that John Oliver’s genius lies in creating ludicrous spectacles where he can prove his own points in real time.

After eviscerating the unscrupulous world of debt buyers, one which has included an annual Debt Buyers Association conference with seminars titled “Debt Buyers Are the Good Guys: How to Convince the Court” and members of a House Insurance and Commerce Committee passing laws beneficial to debt buyers whilst literally laughing in session about how they “always take care of the bankers,” Oliver went on to become a debt buyer himself. 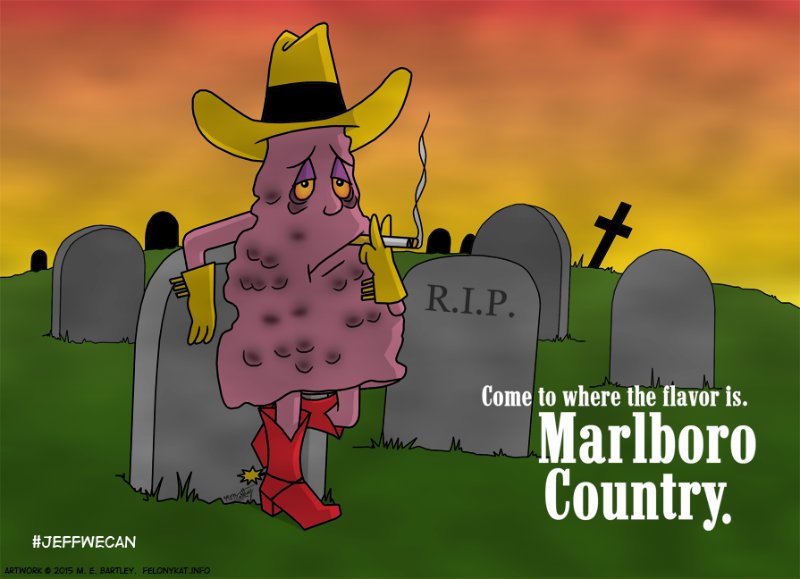 Jeff the Diseased Lung in a Cowboy Hat
Image: DeviantArt

Be it aggressive and misleading lawsuits from tobacco companies, abuse of special districts, televangelism, publicly funded sports stadiums, or debt buying, John Oliver consistently proves that if one possesses a sufficient amount of capital, lawyers, and staff (like he does on his TV show) then they can make the system work in their favor or against the favor of others.

Last night, with the same tools others use to perpetuate the constant plague of debt that many American families face, John Oliver and his team took people out of debt.

Although Stephen Colbert did once set up his own Super PAC to prove a point about campaign finance, the ever-present activism of Last Week Tonight is what separates it from shows like the Colbert Report or The Daily Show.

Instead of solely creating moral or logical outrage (which Oliver still does plenty of), John Oliver is able to explore the nuances of things that most of people just don’t have the time to understand, but are nonetheless important.

So for that service, we all thank you John.