By Joe McCarthy  and  Pia Gralki

Civil rights activist and Rep. John Lewis, D-Ga. is introduced before speaking at the unveiling of a U.S. Postal Service stamp commemorating the 50th anniversary of the March on Washington, in August 2013 at the Newseum in Washington, DC.
Charles Dharapak/AP
NewsCitizenship

By Joe McCarthy  and  Pia Gralki

Why Global Citizens Should Care
John Lewis was a lifelong champion of human rights, whose actions supported the United Nations’ Sustainable Development Goals. You can join us in taking action on issues he fought for here.

The legendary civil rights leader John Lewis died at the age of 80 on July 17, but his legacy of getting into "good trouble" to oppose systemic racism is still very much alive and will continue on for years to come.

Lewis dedicated his life to protecting and advancing the rights of Black people in the United States. He was beaten and arrested as a Freedom Rider in the early 1960s, he galvanized seas of people alongside Martin Luther King Jr. at the 1963 March on Washington, and spent nearly four decades championing the causes of marginalized communities as a member of the US House of Representatives for Georgia. 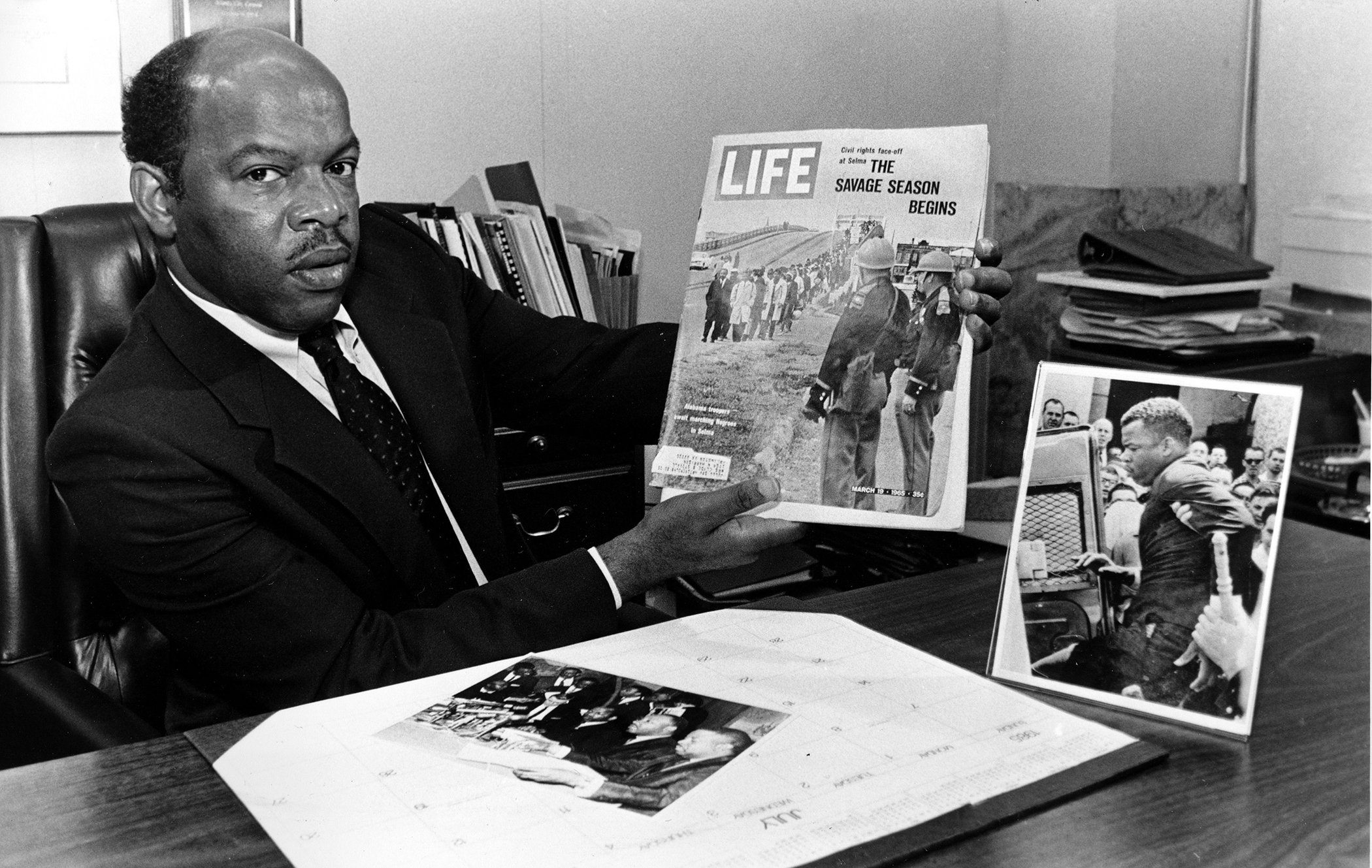 In the last few years of his life, Lewis worked tirelessly to get the Voting Rights Advancement Act enacted into law as a way to guarantee every American’s right to vote, a right that had been compromised by the Supreme Court’s Shelby County v. Holder decision in 2013.

"I have said this before, and I will say it again," Lewis said in June 2019. "The vote is precious. It is almost sacred. It is the most powerful non-violent tool we have in a democracy."

Since 2013, the simple act of voting has been hindered and blocked in several states, as governments enact new voting requirements, purge voter rolls, close voting locations, and spread misinformation, according to the Brennan Center for Justice.

"Since the Shelby decision, voter discrimination is on the rise," Lewis said in a press release in August 2018. "Thousands of people of color are being systematically denied access to the ballot box, many of whom have voted all their lives."

The Voting Rights Advancement Act would stop these violations and extend the right to vote to all US citizens, including Black and Latin American people, people living in poverty, youth, and the formerly incarcerated. The bill has already passed the US House of Representatives, and many of Lewis’ allies are now saying that showing support for its enactment is one way to honor the late civil rights activist.

Another way to recognize his legacy is to learn from his experience, put his bold words into action, and champion human rights globally.

Here are 10 quotes from Lewis that provide perspective and inspiration for the fight for social justice.

1. "Get in good trouble, necessary trouble, and help redeem the soul of America."

— Lewis speaking atop the Edmund Pettus Bridge in Selma, Alabama, on March 1, 2020

2. "Nothing can stop the power of a committed and determined people to make a difference in our society. Why? Because human beings are the most dynamic link to the divine on this planet."

― Lewis on political change in Across That Bridge: Life Lessons and a Vision for Change 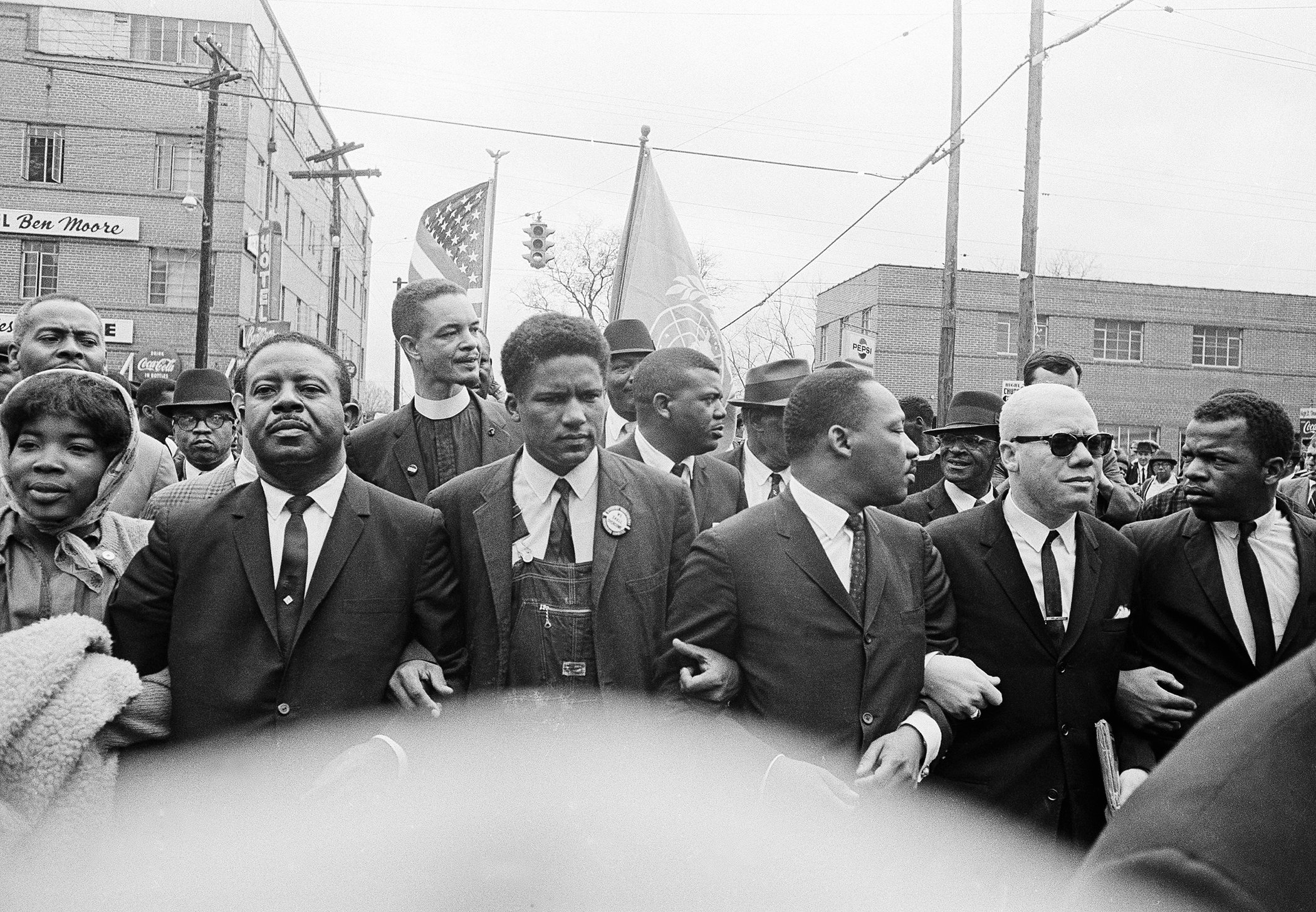 3. "Take a long, hard look down the road you will have to travel once you have made a commitment to work for change. Know that this transformation will not happen right away. Change often takes time. It rarely happens all at once. In the movement, we didn't know how history would play itself out. When we were getting arrested and waiting in jail or standing in unmovable lines on the courthouse steps, we didn’t know what would happen, but we knew it had to happen."

— Lewis on protesting in Across That Bridge: Life Lessons and a Vision for Change

― Lewis on movement building in Across That Bridge: A Vision for Change and the Future of America

Related Stories June 12, 2020 14 Black Activists and Authors Providing Crucial Insight Into Racial Justice in the US

5. "You are a light. You are the light. Never let anyone — any person or any force — dampen, dim or diminish your light … Release the need to hate, to harbor division, and the enticement of revenge. Release all bitterness. Hold only love, only peace in your heart, knowing that the battle of good to overcome evil is already won."

― Lewis on being human in Across That Bridge: A Vision for Change and the Future of America 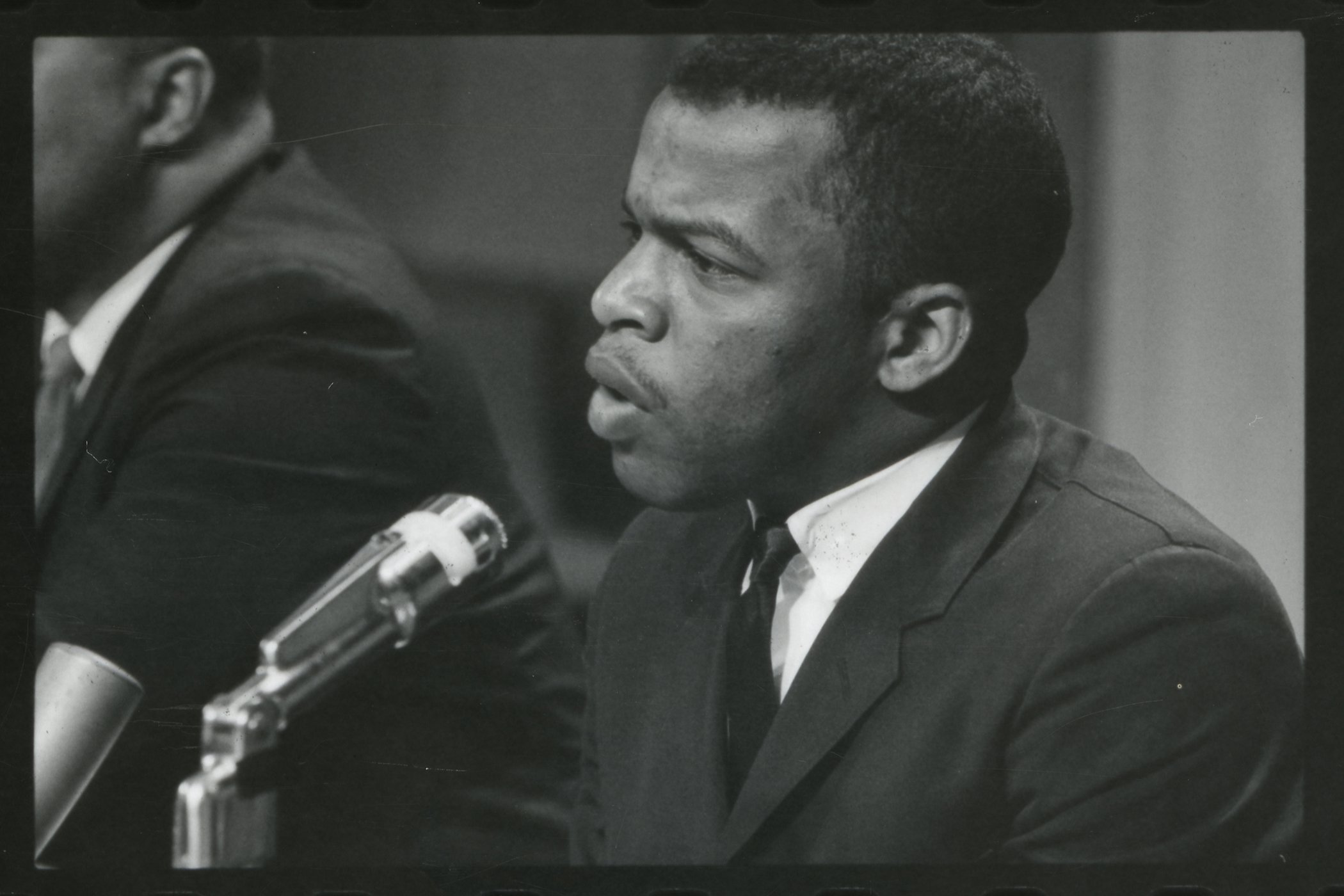 6. "I believe in freedom of speech, but I also believe that we have an obligation to condemn speech that is racist, bigoted, anti-Semitic, or hateful."

― Lewis on speech in Walking with the Wind: A Memoir of the Movement

— Lewis on seeking truth, justice, and equality, during the impeachment trial for US President Donald Trump

8. "Freedom is not a state; it is an act. It is not some enchanted garden perched high on a distant plateau where we can finally sit down and rest. Freedom is the continuous action we all must take, and each generation must do its part to create an even more fair, more just society."

– Lewis on what he learned from movement building in Across That Bridge: A Vision for Change and the Future of America 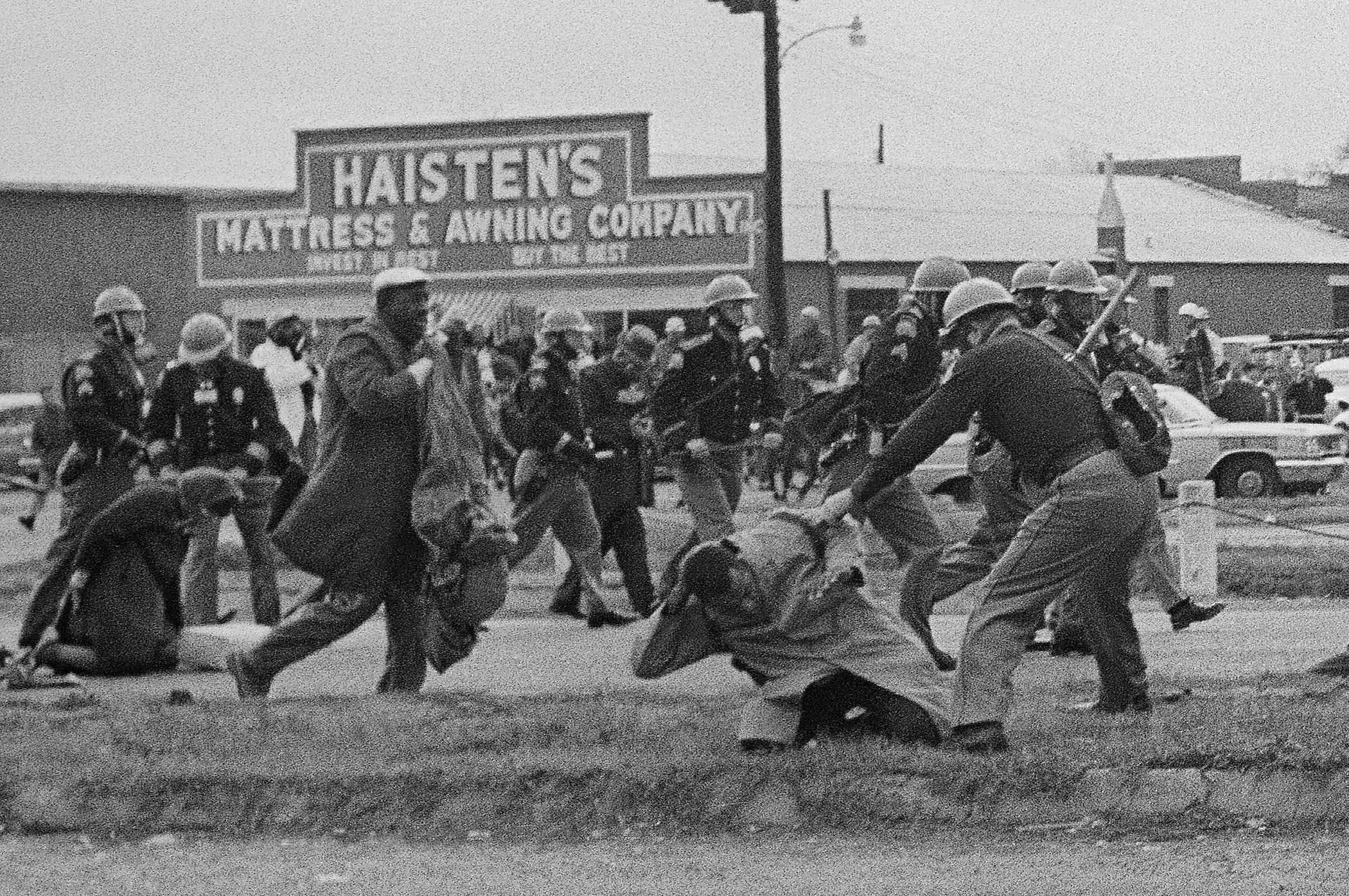 State troopers swing billy clubs to break up a civil rights voting march in Selma, Ala., March 7, 1965. John Lewis, chairman of the Student Nonviolent Coordinating Committee (in the foreground) is pictured as he is beaten by a state trooper.
Image: AP Photo

9. "A democracy cannot thrive where power remains unchecked and justice is reserved for a select few. Ignoring these cries and failing to respond to this movement is simply not an option — for peace cannot exist where justice is not served."

— Lewis on the George Floyd Justice in Policing Act

Related Stories June 5, 2020 Why Anti-Racism Must Be a Cornerstone of Being a Global Citizen

10. "These young people are saying we all have a right to know what is in the air we breathe, in the water we drink, and the food we eat. It is our responsibility to leave this planet cleaner and greener. That must be our legacy." 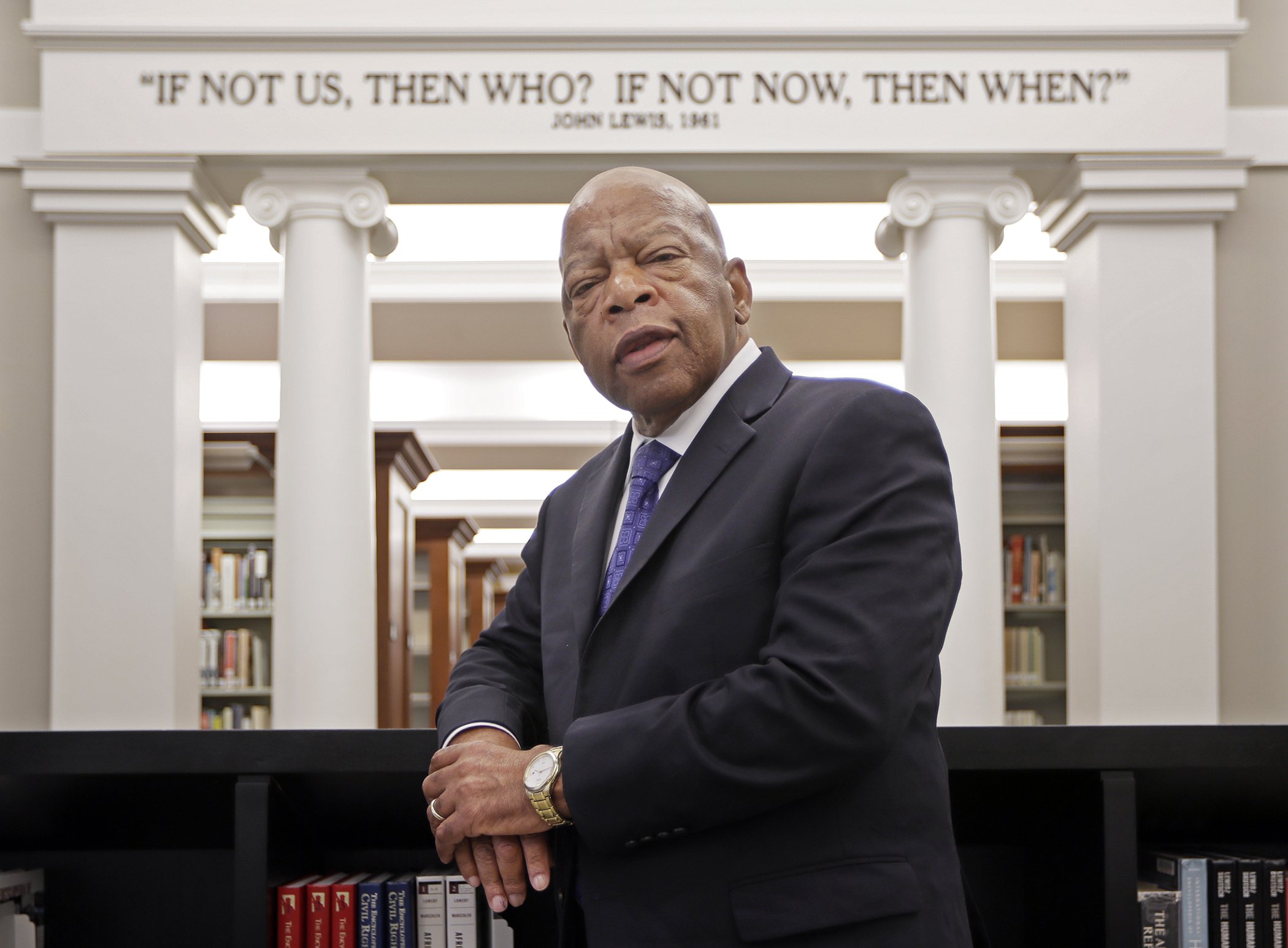 Rep. John Lewis, D-Ga., poses for a photograph under a quote of his that is displayed in the Civil Rights Room in the Nashville Public Library Friday, Nov. 18, 2016, in Nashville, Tenn.
Image: Mark Humphrey/AP

TopicsCurrent eventsCitizenshipPowerRacismHuman rightsCivil rightsMenschenrechteRassismusJohn LewisQuotesProtestMovement buildingAnti racismsystemischer RassismusZitateWahlrecht
Civil rights activist and Rep. John Lewis, D-Ga. is introduced before speaking at the unveiling of a U.S. Postal Service stamp commemorating the 50th anniversary of the March on Washington, in August 2013 at the Newseum in Washington, DC.
Charles Dharapak/AP