Happy Purim! 5 things you should know about the ‘Jewish Mardis Gras’

The festive holiday begins on March 23rd this year. 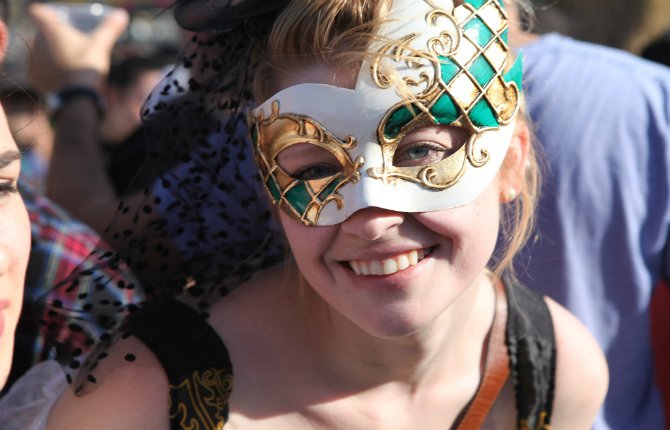 Starting today, Jews around the world take part in the festival of Purim to celebrate the survival of the Jewish people under ancient Persian rule. Purim is one of the most entertaining Jewish holidays and has a carnival-like atmosphere, with people dressing up in costumes and letting loose.

#Purim Sameach! Celebrate the heroism of Queen Esther who exposed plot of evil Haman 2 murder the Jews of Persia pic.twitter.com/G2Rn0V3s5a

The backstory of Purim is quite the epic tale. It takes place 2,500 years ago in Persia. Haman, an advisor to the Persian King Ahasuerus (thought to be Xerxes I), tried to wipe out the Israelites on the 14th day of Adar.

But Esther, the king’s wife and queen, along with her cousin Mordechai confronted the king to stop Haman’s evil plan. The story ends with Haman’s death and the Jewish people being saved.

The term Purim refers to the lottery system that Haman used to decide what day the massacre would take place.

2) The story is re-enacted through readings and plays

Plays re-enacting the story are popular during Purim.

During retellings of the Book of Esther at synagogue services, people are encouraged to make a racket and shake noisemakers called groggers at the mention of Haman’s name. The purpose of the noisy custom is to symbolically blot out Haman’s name from history.

In Israel specifically, parades, street parties, and even zombie walks take place providing celebrators with plenty of opportunities for fun.

The masks we wear on Purim — and on Facebook https://t.co/xZIp0ca2txpic.twitter.com/9F0E1B0P7q

A traditional feast known as Purim se'udah is held, where people gather to eat a large meal and drink plenty of wine. There's a saying that adults are obliged to drink until they don't know the difference between "cursed be Haman" and "blessed be Mordechai."

Purim is not about drinking. Purim is about being drunk with sincere happiness. pic.twitter.com/wJapcWk5WS

A hamantash (pl.hamantaschen) is the iconic food of Purim. Hamantaschen, which literally translate to "Haman’s pockets," are sweet triangular pastries. While the most traditional filling is poppy seed, they can be made with a variety of fillings including prunes, nuts, apricots, dates, halva, fruit preserves, chocolate, and even funfetti!

There are even hamantaschen eating contests!

Except kids hand out treats instead of receiving them. During the festival, friends give each other foods and celebrants are encouraged to give food and money to the poor as well.

Popular costumes include characters from the Book of Esther.

What to Expect at a Purim Celebration https://t.co/vb7b871OEHpic.twitter.com/GPAdIP450L

And it's not just kids that get to dress up. All sorts of people get in on the fun.

Who knew flying on Purim could be so much fun?! Yesterday's #ELAL passengers got to enjoy a special Purim experience! pic.twitter.com/bSbzxCMatC

Whether you celebrate Purim every year or are new to the holiday, happy Purim to all!