Where Jeremy Corbyn Stands on the Issues You Care About

He's back. We analyse the newly reelected Labour leader on his commitment to global goals. 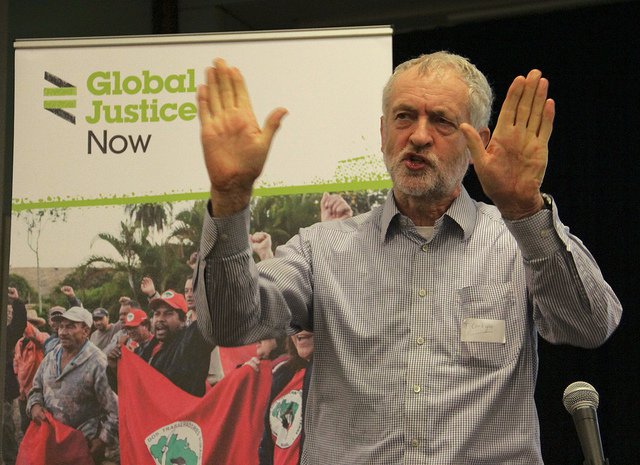 Well, it’s finally happened. After a drawn out leadership battle with rival Owen Smith, Jeremy Corbyn has been re-elected as the leader of the Labour party with an overwhelming majority of votes. The result comes as little surprise. The membership has spoken, and Corbyn will take his seat once more as the head of the opposition.

Questions clearly remain. Theresa May remains way ahead in the polls, even on issues like providing security for a public funded NHS. The Parliamentary Labour Party (PLP) will now have their own choices to make too - will the party rally behind the leader or fragment into conflicting factions? Only time will tell whether Corbyn and his team will be able to provide credible opposition whilst holding onto the support of his own party. That’s before we even start talking about the possibility of a snap election.

As the dust settles after his closing speech at the Labour Party Conference, it's time to take a look at the Corbyn agenda. The UK needs a strong opposition leader, otherwise the fundamental aspects of our democracy break down. But we also need leaders to fight for change on a global stage. How does Jeremy Corbyn rate as a Global Citizen? Can he hold the torch high, or does he do nothing more than fan the flames? Here's the Labour leader's stance on seven key issues that face our world today:

“We will never be a successful society in which everybody is able to achieve their potential until there is equality for women. The waste that is brought about in our society by discrimination and poverty is absolutely huge. We are all the poorer.”

- Compile all-female candidate shortlists to reach equal representation in Parliament. Currently, the UK is 49th in the world for parliamentary equality, with female MPs accounting to only 29.4% of the elected total.

- Empower the Equality and Human Rights Commission to penalise companies that do not publish detailed gender pay data.

Last week, Corbyn released a document entitled ‘Equality for Women’, pledging ten actions on gender equality. Interestingly, he’s also called for a policymaking conference just for women. Last year, he proposed women-only carriages on trains to curb sexual violence. Critics of such a suggestion included Yvette Cooper, who said that such segregation was "turning the clock back, not tackling the problem.". It might also be difficult to wage a campaign of equality against a party led by the first female Prime Minister since Margaret Thatcher. Indeed, Labour has never had a female leader.

“We have to [bring in more refugees] as a country, with other European countries. I have been working with other socialist parties, and socialist party leaders, from across Europe to agree a statement on what we would all do in our own countries, and we’re working on that now.”

- Increase the number of refugees we take in. Right now, the UK have agreed to resettle 20,000 Syrian refugees by 2020. - Specifically, take in more unaccompanied children. There are more than 88,000 child refugees in Europe, yet Britain has taken in fewer than 20.

Corbyn visited the “shameful” Calais jungle camps at the beginning of this year, and has repeatedly claimed that we have a have a "human responsibility" to reach out to those worst affected, such as children. In the past, he’s stated that refugees should be offered more than just refuge; the government should help educate and house them too. Although Corbyn’s first act as Labour leader was to attend a demonstration in solidarity with refugees around the world, he’s been shy to put a specific number forward.

Yesterday I went to refugee camps in France and saw first-hand the appalling conditions people are living in therehttps://t.co/zwWpSJ1FvS

“The defence budget should be used where necessary so that Britain is very good at giving aid and comfort in emergencies.”

- International aid will be protected and expanded.

- Set aside a part of the defence budget to provide foreign aid and help countries in crisis.

- Will not prioritise trade as part of any consideration for where foreign aid money is spent.

Corbyn has been uncharacteristically quiet on international aid. Most dialogue around policy has come from Kate Osamor, the new Shadow Secretary for International Development. Osamor has been vocally critical of Priti Patel, the current DfID Secretary, who has insisted that we must consider trade when investing in international aid. But we cannot just assume what Corbyn's natural position is by Osamor's statements; he must come out and claim global issues as an absolute priority. He is yet to do this.

'A referendum took place, and a decision was made by the British people. Parliament has to accept that decision and work with it.'

- No second referendum. Corbyn will not tamper with the democratic will of the majority, and will respect the vote to leave the European Union.

- Fight a 'hard brexit'. He'll protect Britain's manufacturing industry from under-the-table deals that endanger the 70% of their exports that go to Europe.

- Ensure that Parliament is fully informed of all negotiations.

Corbyn was slammed after the referendum decision,  after a wave of criticism that questioned his intentions. Many did not believe that he truly wanted the UK to remain inside the European Union, citing his lack of enthusiasm on the campaign trail as evidence that he did not give everything to support the cause. We may never know what he truly wanted before the vote, but his post-referendum position has been consistent. Corbyn now accepts the Brexit decision, and insists that Labour must be involved in the investigations, otherwise the future of British industry will be under threat.

“In order to deliver clean, affordable heating and electricity we need to change the whole system of energy supply. When energy is driven by the needs of people, it will be greener – because saving the planet is in the interests of everyone.”

- Commitment to generate 65% of UK energy through renewable sources by 2030.

- Create 316,000 jobs 1,000 energy cooperatives, and 200 local energy companies, all to push the country towards a cleaner energy plan.

- Ban fracking completely as a means of mining energy.

Corbyn, in a piece for The Guardian this month, could not have been clearer in setting out his ideas, promising to reinstate the Department for Energy and Climate Change that was recently scrapped. For him, the environment is a critical security issue. His team, launching a new climate manifesto, even went as far as to claim that their pledges are “the boldest environmental policy of any major party in British history”. His push for replacing fossil fuels with renewable sources is vital, and will apply important pressure in the fight for meaningful environmental change.

“We will defend our Human Rights Act as we defend the human rights of everyone in this country”.

- Every UK embassy in the world will get a human rights advisor.

Corbyn has been passionately outspoken in defence of The Human Rights Act. In the past, Corbyn has confronted President Xi Jinping over China’s controversial human rights record, and has spent years campaigning for peace in the conflict between Israel and Palestine. However, Corbyn has been criticised for failing to address anti-semitism within his party. Corbyn was reported by the Jewish Human Rights Watch after allegedly comparing Israel with ISIS. However, the subsequent report into anti-semitism in the Labour Party concluded that it was “not overrun by anti-semitism, islamophobia or other forms of racism”.

Yesterday the Conservatives proposed to repeal the Human Rights Act in the #QueensSpeechhttps://t.co/1YGaJksnQF

“You don’t make peace unless you talk to everybody.”

- Attempt to bring about political solutions to global conflicts.

- Continue campaigning against Trident, the recently renewed UK nuclear weapons programme. However, he clarified at the Labour Conference that he will back the official party line on the issue, and will not force his objections into party policy.

Corbyn came under fire this month from the right wing press as he said that he wanted to “achieve a world where we don’t need to go to war.” Similarly, he was viciously attacked for claiming that, if he was Prime Minister, he would never detonate a nuclear weapon. Indeed, Corbyn has been a member of the Campaign for Nuclear Disarmament all of his adult life, and once chaired the Stop The War Coalition. Whilst Corbyn's vision for a world where true peace can, and should, exist universally is an admirable one, his lack of foreign policy experience raises concerns over how he will respond in times of international crisis. He must ensure his relationship with NATO is positive too, as he’s criticised them heavily in the past. It remains to be seen whether this position can satisfy the British public and survive the pressures of international politics.

Well done everyone for coming to Parliament today to wrap up Trident. Nukes are dangerous and costly & wrong pic.twitter.com/gwj9u0njom

Corbyn has shown his commitment to using Britain's influence as a world power to propel real, distinctive change around the world. Since he first assumed his seat as MP for Islington North in 1983, he has been a passionate advocate for peace and support in the global community. Is he perfect? Of course not. He must back up his principles and ideas with policy. He is yet to make a clear committment to international aid, where a strong position is absolutely vital to continuing to make a proper contribution as a nation to global issues. In addition, he must reinforce his stance on the refugee crisis with immovable promises. And, immediately, he must take a powerful offensive stance on anti-semitism within the Labour Party. We need all our leaders to act as global citizens. Only continued pressure on all mainstream parties will make this a reality.

Now that you've read all the way to the bottom, enjoy a GIF on us of Corbyn having a bit of a dance in Sunderland.

The views represented in this article do not necessarily represent those of Global Citizen and its partners.