Outrage after jaguar is shot dead at Olympic event

A soldier in Brazil shot and killed a jaguar shortly after an Olympic torch event when the wild animal escaped from its handlers, according to military officials.

When the jaguar, named Juma, broke free from her confinement, soldiers and veterinarians worked to recapture her. After their attempts failed, they shot her with a pistol.

Several images and videos of the event show the animal lying on the ground in chains and a collar while a man with the torch kneeling not far from the jaguar. However, the local committee insists that these images are not reflective of the values of the Olympics. 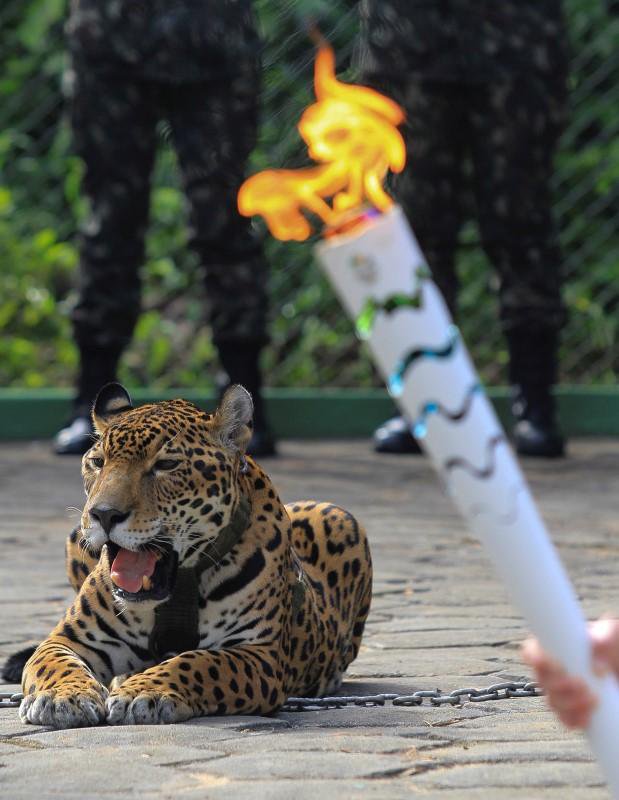 The death of the 17-year-old jaguar has prompted angry responses from animal advocates and a response from the local Olympic Games organizing committee that hosted the torch event.

"We made a mistake in permitting the Olympic torch, a symbol of peace and unity, to be exhibited alongside a chained wild animal. This image goes against our beliefs and our values," the local organizing committee said.

“This scene contradicts our beliefs and value,” the committee said. “We are very saddened by what happened after the torch relay and guarantee we will not witness any other situations like this one during the Rio 2016 Games.”

"When will we learn?” PETA, an animal rights group, said in a written statement. “Wild animals held captive and forced to do things that are frightening, sometimes painful, and always unnatural are ticking time bombs — our actions put them and humans at risk."

Jaguar at #Olympics ceremony shot & killed while trying to escape. She wanted to be free. https://t.co/EDLha6y3my

As the Olympic jaguar is shot, how many more animals have to die for our entertainment? https://t.co/s1SiUxn27m

Ironically, the Olympic team mascot for Brazil is a cartoon jaguar named Ginga. An image of the animal even appears on the emblem of the Manaus military base, where the event took place.

Reuters reported that the use of Juma at the event was also illegal.

"No request was made to authorize the participation of Juma in the event of the Olympic torch," said Ipaam, the Amazonas state government environmental authority that oversees the use of wild animals, according to Reuters.

In addition to the illegality of Juma’s participation, jaguars are considered a near-threatened species, according to the World Wildlife Fund.

With less than two months to go before the Olympic Games begin, the last thing Brazil needs is another problem. Following the suspension of their president and the Zika virus cases, spectators are worried about their health and safety. Last week, Rio de Janeiro's governor declared a "state of calamity," saying that the state hosting the Olympics is bankrupt. Now, animal rights activists are firing back about the death of Juma.

"It's neither healthy nor advisable to subject an animal to such a situation, with lots of noise and people," University of Brasilia animal behavior scientist Joao Paulo Castro told the BBC. "Often, jaguars already are stressed by being kept in captivity; that's only compounded when they're exposed to hubbub."

He said Juma's participation in the ceremony could have stressed the animal and contributed to the escape attempt.