Here's Everything Global Citizens Should Know About the 2018 Invictus Games

The international sporting event is currently down under for the first time.

Why Global Citizens Should Care
The Invictus Games celebrate acceptance for all by promoting the notion that disability does not equal inability. Prince Harry, who founded the Games, is a wonderful role model for Global Citizens everywhere. Not only has he long worked to stamp out the stigma attached to mental illness, he has also worked heavily with HIV/AIDS patients and at-risk youth. You can join us in taking action on these issues and more here.

Sport has long been regarded as a powerful mechanism to heal and unite both the mind and body.

This concept, alongside the notions of strength, honor, and optimism, initially sparked the idea of the Invictus Games, an international sporting event for wounded, injured, and ill active service members and veterans. The Games, founded by Prince Harry, the Duke of Sussex, in 2014, have this week taken place in Australia for the very first time.

From Oct. 20 to Oct. 27, 500 competitors and 1,000 family and friends will arrive in Sydney’s Olympic Park for the fourth edition of the Games. The athletes will compete for medals across 11 sports, including sitting volleyball, wheelchair basketball, wheelchair tennis, and powerlifting.

"It’s your privilege to watch in the stands or with your friends & families around the television. It’s your responsibility to make sure your children know how amazing these guys and girls really are..."
The Duke of Sussex, to all Australians #GameOnDownUnder@WeAreInvictuspic.twitter.com/RZGktsSiYW

Prince Harry and Meghan Markle touched down in Sydney on Oct. 16 ahead of the Opening Ceremony. The ceremony, hosted in front of the Opera House, illustrated and celebrated personal stories of endurance and mental health recovery through song and dance.

Fantastic to see my good friend Invictus co-captain Emma Kadziolka doing the Army proud at the Invictus Games. You're all are an inspiration pic.twitter.com/Q2aIWnVDqz

Among the best highlights thus far has undoubtedly been Emma Kadziolka’s win in the four-minute rowing division for team Australia. Kadziolka, who joined the Australian Army in 2013 as a nursing officer, was diagnosed with a brain tumour almost two years ago. The Games, she states, have been vital to her mental and physical rehabilitation and recovery. 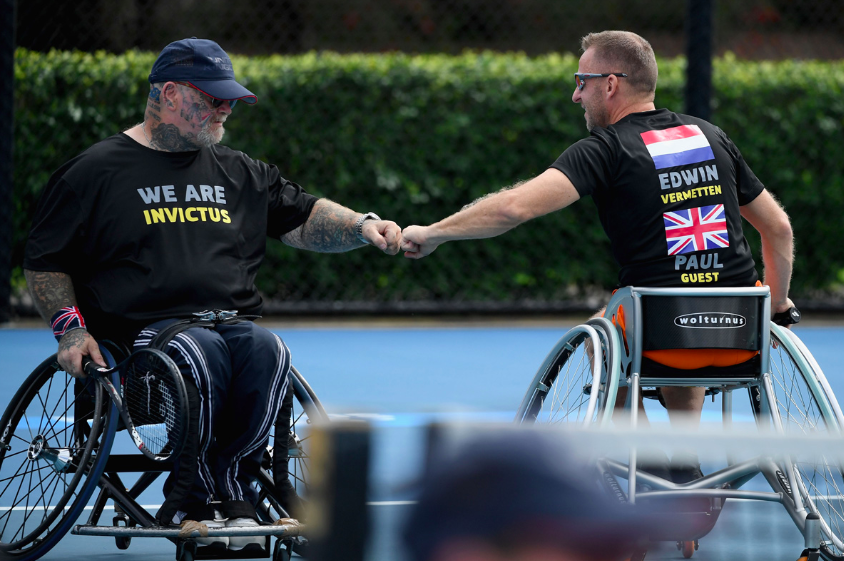 Paul Guest of the UK and Edwin Vermetten of the Netherlands during the Wheelchair Tennis Open Doubles Pool B during day three of the Invictus Games Sydney.

One of the most moving moments of the Games occurred during a wheelchair tennis match between the Netherlands and the UK. Dutch player Edwin Vermetten came to the aid of UK player and English mine warfare specialist Paul Guest after he became distressed by a helicopter flying in the air above him.

The former Navy serviceman was injured during active duty in 1987. He attempted suicide four times following his medical discharge and has since been diagnosed with post-traumatic stress disorder.

"I took him by the face and said ‘Look at me. We are a team so let it go’,’” Vermetten stated, before announcing he was able to calm Guest down by singing "Let It Go" from the Disney movie Frozen. “I said look into my eyes and sing the Frozen song. For him, this was the moment he let go, and he did, he literally let it all go.”

Related Stories May 17, 2019 5 Things You Should Know to Help End the Mental Health Crisis

Over the past decade, knowledge regarding the true harrowing extent of mental health issues in veterans and servicemen has increased.

In April 2018, the Australian government revealed statistics from a report that examined how working in the Australian Defence Force affects the lives of servicemen. The report announced that 46% of veterans who leave the ADF within five years experience a mental disorder, with 18% living with post-traumatic stress disorder and 17% experiencing panic attacks.

As the Invictus Games wrap up in the coming days, viewers can expect plenty more sportsmanship, further incredible athletic feats, and most importantly, additional open discussions around mental health and health in general for veterans.