A rebirth for traditional birth attendants.

Standing in the doorway, Marian Keikula washed her hands with bleach water, as is the norm in an era of Ebola, and called out to a pregnant woman. The woman emerged from the dim interior, trailed by her son and elders. As everyone gathered outside, Keikula began chatting with the woman about her pregnancy. How was she feeling? Had she experienced bleeding? Was she taking traditional herbs?

Using pictures for illiterate audiences, Keikula counseled the mother in the rural village of Taninahun in Sierra Leone about the risks of traditional medicines and home birth, and checked for complications. She stressed the importance of visiting the health center to make sure the mother and her baby stayed healthy, and gave her a referral card for an antenatal care visit.

Sierra Leone faces one of the highest death rates in the world for newborns and pregnant women. Historically, women gave birth at home with the help of a traditional birth attendant, who typically had little or no formal health care training.

To encourage women to deliver at health facilities, the government in 2010 made health care free for pregnant women and young children, and discouraged traditional birth attendants like Keikula from delivering babies at home. But many women continued to have their babies at home, often because the clinics were far away and short-staffed or were regarded with suspicion. Needless deaths continued.

A rebirth for traditional birth attendants

In search of a lifesaving solution, Concern Worldwide created the Essential Newborn Care Corps, enlisting the traditional birth attendants who were deeply respected by their communities but had lost the role they played in pregnancy and childbirth. But now, instead of delivering babies, these women visit pregnant mothers and newborns at home, check for danger signs and refer them to the health center for complications, antenatal and postnatal checks, and deliveries. In addition, they teach the parents about health and nutrition, a delivery plan, and methods of family planning. At the same time, they earn money by selling health products the women need. 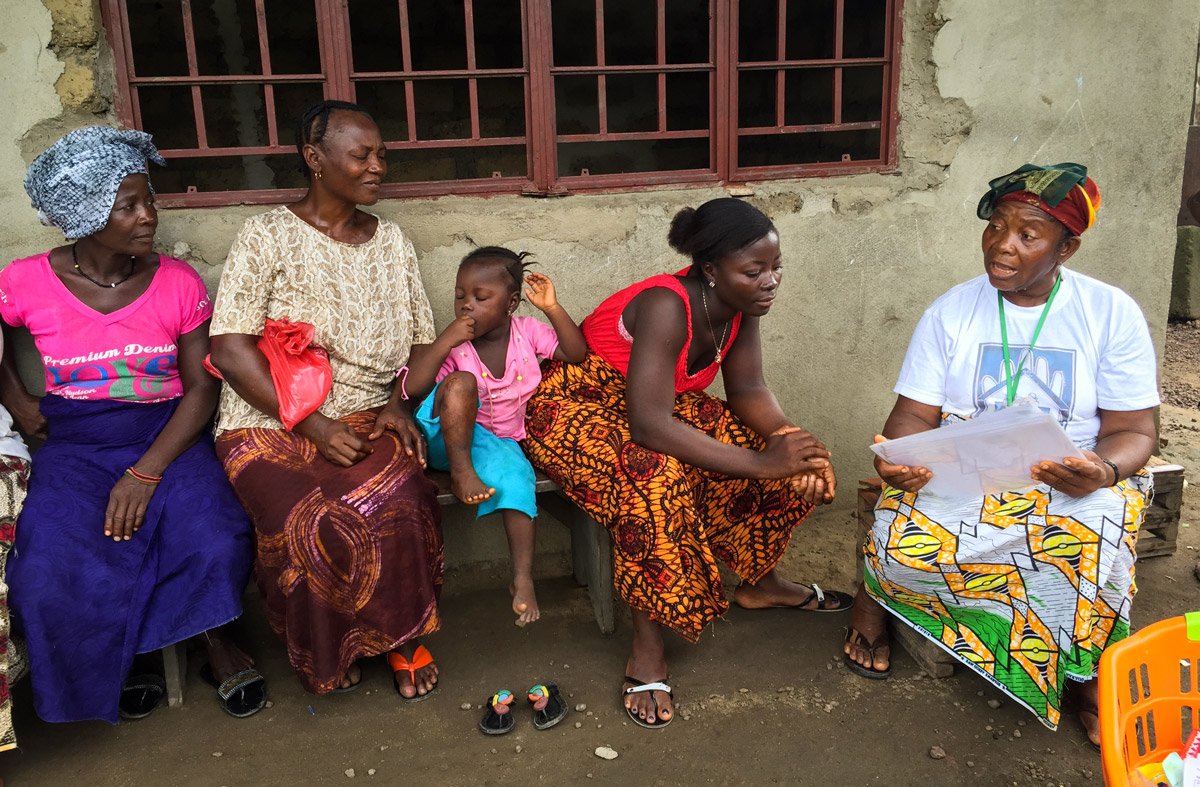 The groundbreaking program, part of Concern Worldwide’s Innovations for Maternal, Newborn & Child Health initiative funded by the Bill & Melinda Gates Foundation, is being piloted in Sierra Leone’s rural Bo District. Since its launch in 2014, the program has trained 200 former traditional birth attendants who cover 344 villages.

In addition to their new roles, the former traditional birth attendants have a new name: Maternal Newborn Health Promoters (MNHPs). These women receive rigorous training and monthly refreshers. Because most are illiterate, they’re trained with songs, dance, and picture cards on everything from identifying danger signs to the importance of breastfeeding immediately after birth and exclusively for at least six months. Nurses from the health centers train and supervise the health promoters, linking them to Sierra Leone’s health care system. 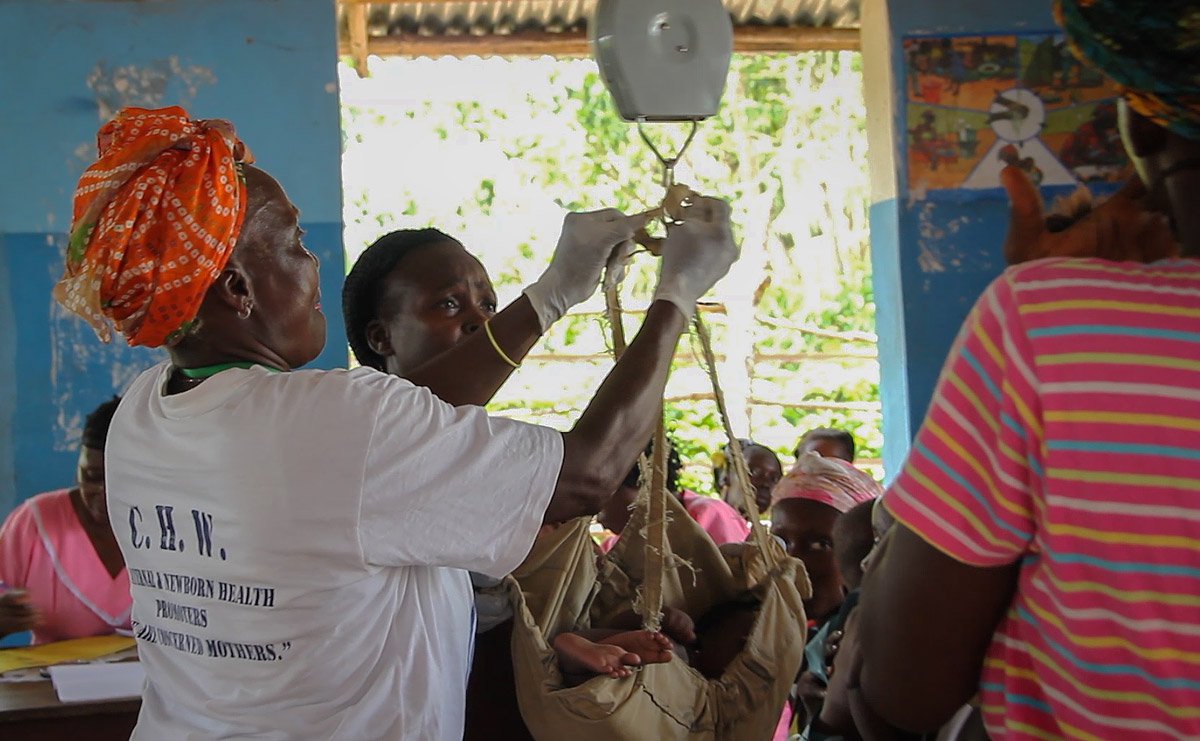 A health promoter and a nurse weigh a newborn at a health center’s “antenatal care day.”

Since the program was launched, Bo District health centers have received thousands of visits from women and newborns referred by the health promoters.

Nurse Irene Moseray said the pilot, run in partnership with the NGO Health Poverty Action and the Ministry of Health, is undoubtedly making a difference.

“Before, the women didn’t really come very much to the clinic,” Moseray said. “We might get 20. Maybe 15. But now we can get 60, 70, 80. The health promoters are really going door-to-door, talking with the mothers, encouraging them to come to the health center." 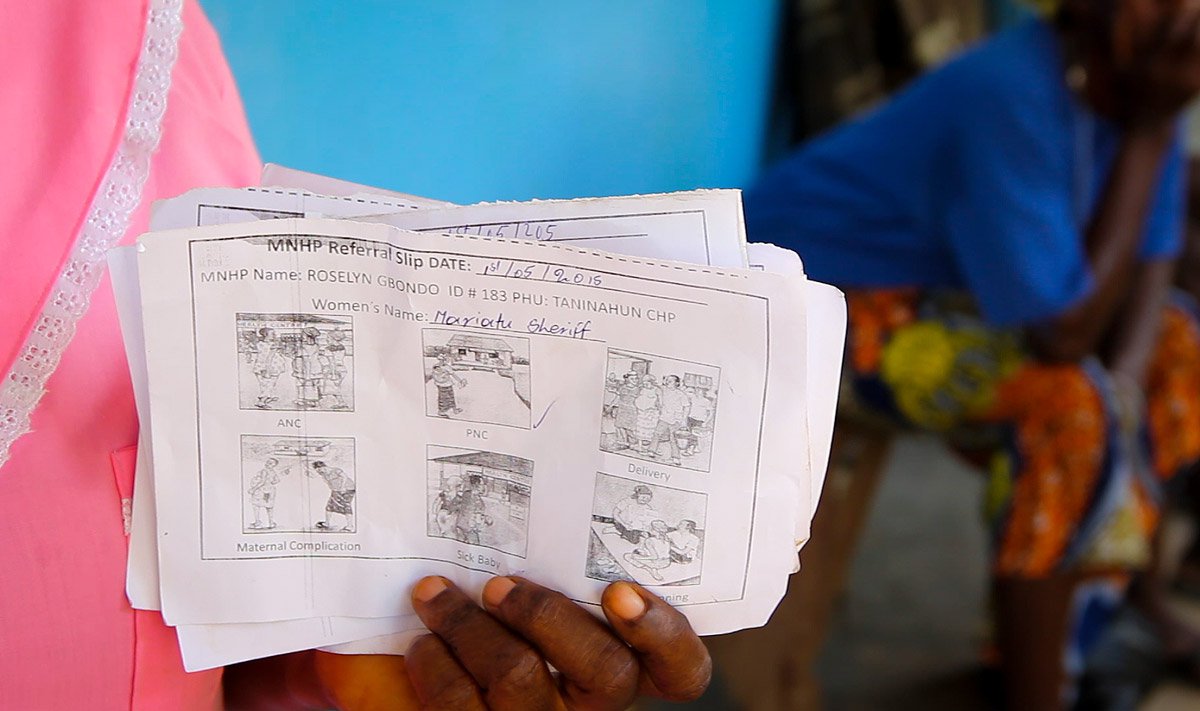 A nurse at a rural health clinic shows referral slips brought by women who received them from health promoters during home visits.

And the health promoters have embraced their new roles. “I realized that it was important to stop doing deliveries because we lacked proper facilities and equipment, and a series of women and children died after women gave birth at home,” health promoter Martha Bockarie said. “But now that we’ve had this training and stopped performing deliveries, we work together with pregnant women to get them to a health facility. That’s why we see more women and children surviving now.”

A trusted link for women

Because the health promoters are prominent community members, the village women listen to the advice. Mary Beecher, who worked as a traditional birth attendant for 46 years before becoming a health promoter, said: “Now, people come from their communities to the health facility. They trust me. They have confidence in me.” 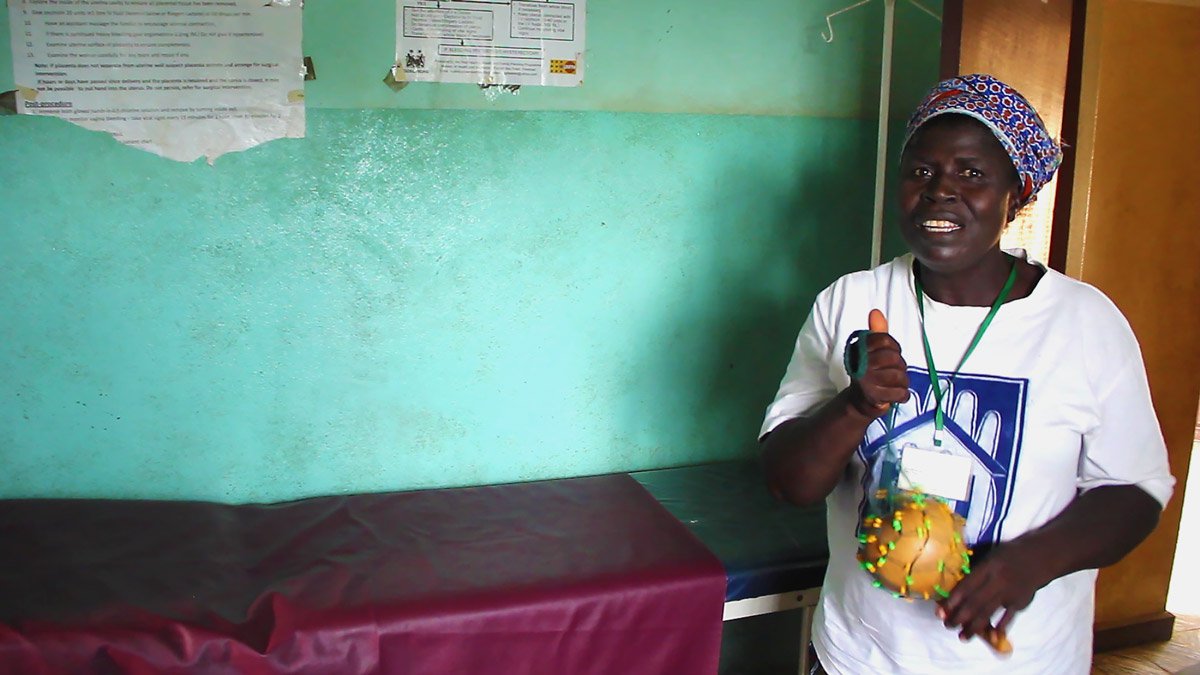 Beecher’s own story is testament to the trials that families go through here. Of her 11 children, only one survived. Sadly, she lost this daughter recently, too.

Unfortunately Beecher’s story is not that unusual. “It used to be that many pregnant women couldn’t even survive their pregnancy or would die during delivery. Or sometimes the baby wouldn’t survive, or both the baby and the mother would die,” said another health promoter, Zainab Sandy.

“The program has helped so much,” Sandy continued. “With the training we’ve received, we refer these women to the health centers. Normally nurses have a very difficult time getting these women to come in on their own, (but now) these nurses can rush the woman to a hospital if a Caesarean is needed. So the number of deaths has gone down considerably.”

Recently, Sandy visited a pregnant woman who said she was bleeding. “That’s not something we normally discuss in the open,” Sandy said. “But when I visited her, she invited me inside, and I explained to her what it meant that she was bleeding, and I took her to the health center where they were able to treat her.”

To incentivize their work, which doesn’t pay, health promoters can earn income by selling health and baby products. The program provides them with business training and a loan in the form of start-up baskets of products equal in value to $30 U.S. dollars. Almost all the health promoters make their monthly loan payments on time and buy more products to sell door-to-door while doing their health education. 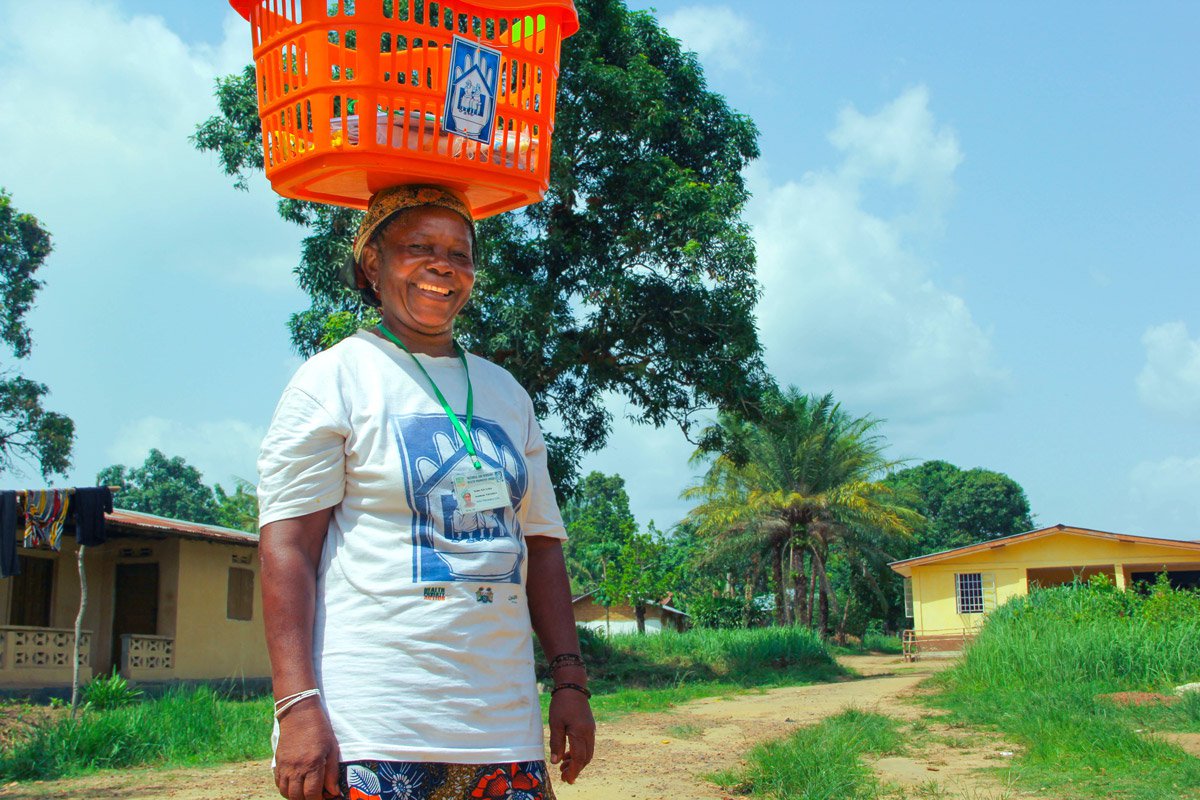 Kai Giba carries her basket of health products during visits to the homes of pregnant women and young mothers.

Before she left the pregnant woman in the village, Keikula showed the mother her basket, pulled out the soap and stressed its importance. The mothers appreciate the products, which are usually hard to access and more expensive elsewhere.

“Everything we want for our babies is found in them – diapers, baby powder, baby oil, soap,” said an expectant mother, Wuya Massquoi. “I have already started buying things. I’m very happy about it.” 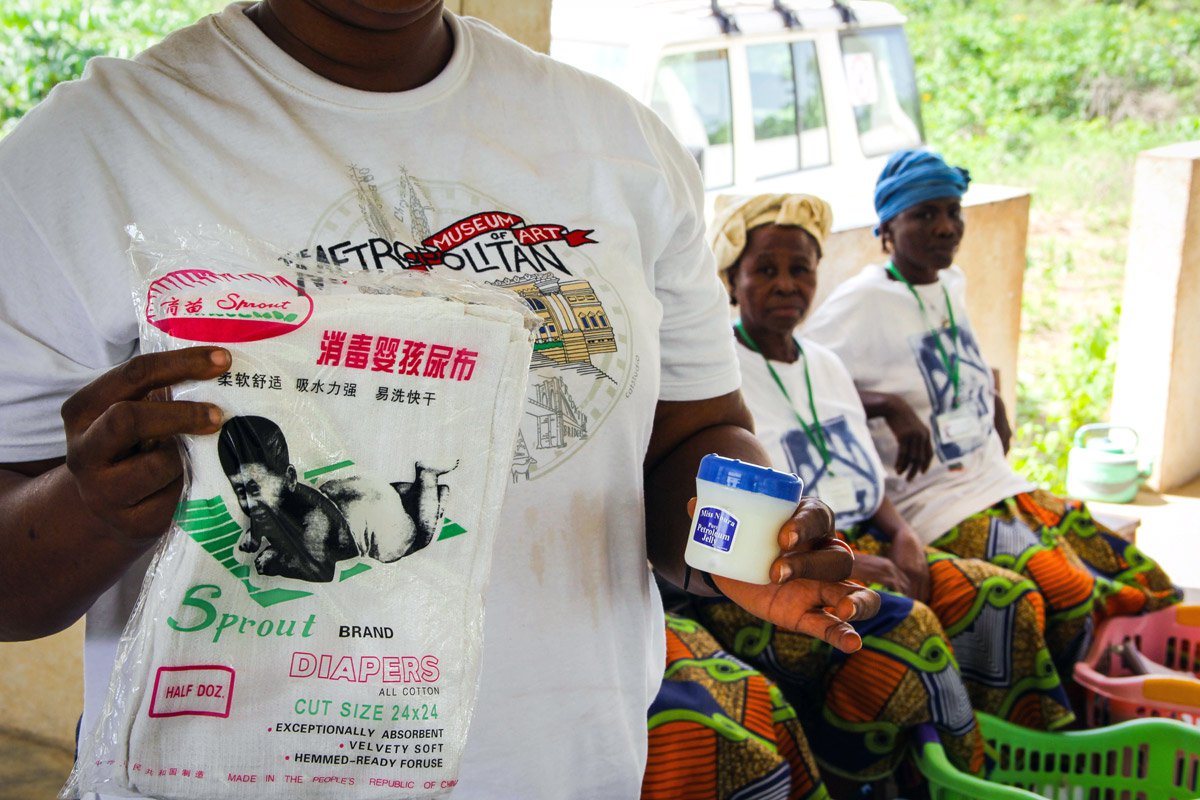 Health promoters sell essential items such as diapers during their home visits.

The health promoters say they like being social entrepreneurs who manage their own businesses. One, for example, said she uses the income to pay her children’s school fees. “The business is helping us a lot,” added Kai Giba. “When I do this business, I keep a little of the money and when one of my grandchildren got very sick, I used this money to take him to the health center.”

Concern Worldwide and its research partner, JSI, are rigorously evaluating the pilot, which could have broader policy implications for Sierra Leone. The country is creating a large health workforce to reach people on a community level but these Community Health Workers are mostly male because of literacy requirements; two-thirds of the women in Sierra Leone remain illiterate. The question becomes, should traditional birth attendants, with their knowledge, respect and networks, be excluded from playing a role in reaching pregnant women and children? 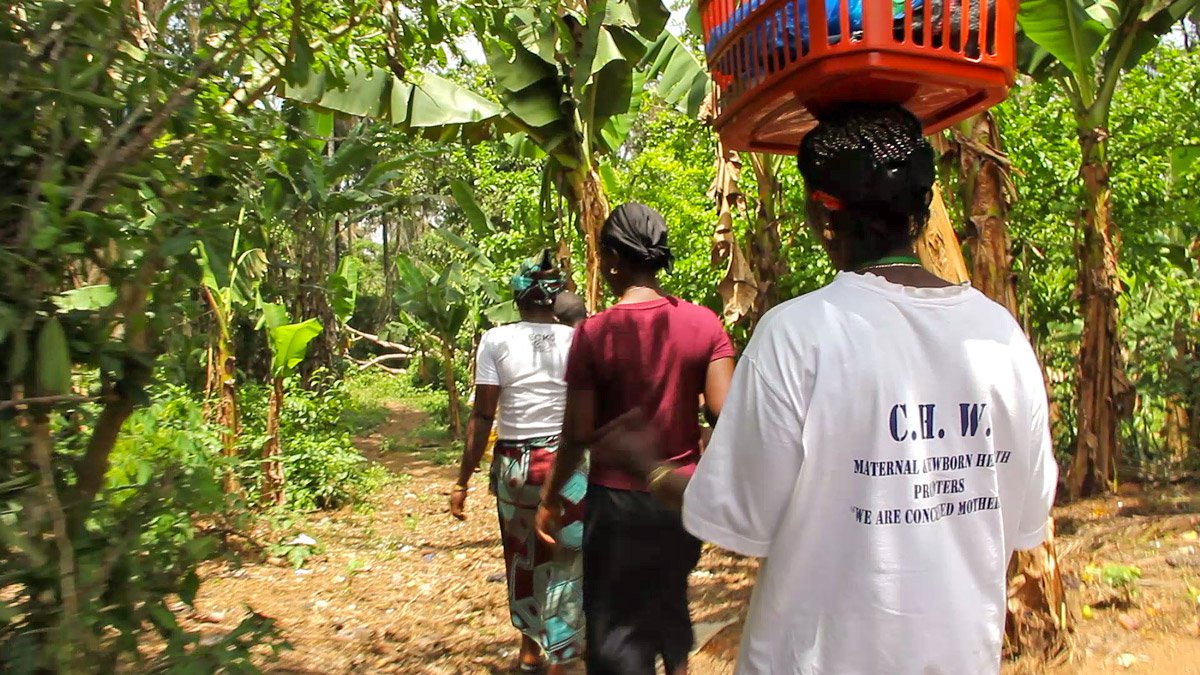 A health promoter accompanies a sick pregnant woman to the nearest health center, miles away on foot through rural bush trails.

In Bo District, health promoters talk passionately about the benefits they’re already bringing to the communities they serve. Beecher says helping pregnant women survive and deliver healthy babies has become her life’s mission. With her own money, she bought each community a hammock to carry those women who can’t walk to the health center. She recalls her grown daughter’s words to her before she passed away: “This is your career, this is your calling, she said. So don’t deviate from it. Make it your life’s work.”