In Mauritania, women take charge of their own lives

How are vulnerable communities combatting poverty and food insecurity?

UNDP has implemented a regional programme amounting to US$15 million for peacebuilding and governance initiatives in the Sahel – of which 2.5 million has been allocated to Mauritania.

The project is aimed at strengthening vulnerable communities through the creation or replenishing of means of subsistence.

In Mauritania, the activities underway are mainly geared towards poverty reduction and food insecurity.

Launched in 1999 with just 11 members, the Foum Gleita cooperative in the south of Mauritania now has 84.

Kadiata Thiam Diallo, 45 years old, is the woman behind this initiative and president of the cooperative. “At the time, having lost most of their herd to drought and having to pay for access to land, many families abandoned agriculture for small business as they did not have the financial means to remain in the sector,” she explained.

“We found it difficult to cover medical expenses for our families, to clothe our children, and to pay for transportation. Like the other women, in order to provide for my family I cultivated sorghum during the rainy season and I had a stall at the market during the dry season. That’s how the idea came to me to pool our resources in order to face the challenges we were experiencing…We were able to share our resources and buy products, travel to the markets or facilitate the granting of small loans.”

In 2012, Mauritania, like the rest of the Sahel, was adversely affected by a complex, wide-ranging crisis that negatively impacted 800,000 people. Chronic poverty, depletion of agro pastoral resources, and limited access to social services, combined with drought and poor crops, all led to an increase in food prices. All this was against the backdrop of violence in northern Mali that caused 75,000 people to flee to Mauritania.

In an effort to remedy this situation, in 2013 UNDP established a US$15 million regional program to enhance peacebuilding and governance efforts in the Sahel, of which $2.5 million was allocated to Mauritania. Financed by Japan, the project is geared towards strengthening the capacity-building efforts of individuals and communities to help them face the challenges of the region’s recurring crises, in particular those linked to climate change, conflict, or food insecurity. 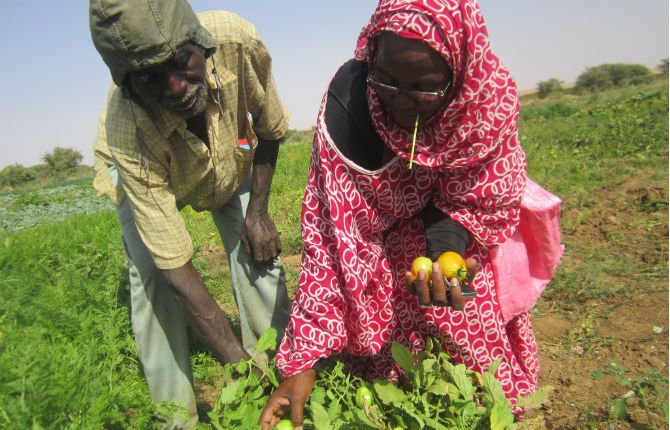 After identifying the Foum Gleita cooperative’s needs, UNDP provided support to the organization by providing wire fencing to help them enclose their land, as well as seedlings, irrigation equipment, and a solar panel kit to keep the produce cool. The members of the cooperative also benefited from a training workshop to enhance their management and monitoring skills.

“Even though none of the women have received formal schooling, we were able to learn and carry out the various administrative procedures in order to launch this cooperative and manage it,” says Kadiata. The first members made a financial contribution in order to feed their small business and help it to grow, and also to pay for transportation to the nearest main city to collect the necessary administrative data and documents to establish the cooperative.

Each member contributes up to 1,000 Ouguiyas (US$3) a month to rent a piece of farmland, buy seedlings, and pay for transporting the produce.

The first harvest is a source of real pride for new members of the cooperative. More abundant than in previous years, this harvest will not only enable the women to feed their families, but will also provide them with a source of income through their sales. Such income will in term enable the cooperative and its members to pay for subscriptions, stock up on seedlings, buy a few livestock and hire day workers to help with harvesting and maintenance, thus enabling this income to be distributed amongst a wider percentage of the community.

As for Kadiata, she fully intends to save some of this income for the cooperative’s future project to become a reality: acquiring more parcels of farmland to solve the lack of access to land.

“The women belonging to the cooperative are now treated with respect,” she reiterated. As a token of such recognition, 10 men have recently joined the cooperative.