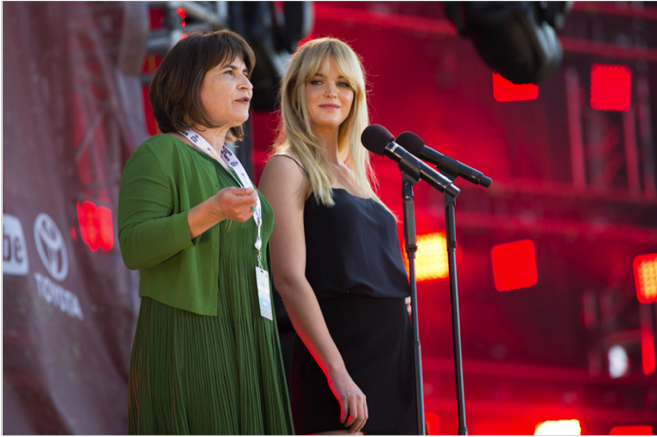 On World Water Day, global citizens tweeted at the Dutch Ministry of Foreign Affairs calling for their 2015 water and sanitation commitment to be implemented. Within hours, the Ministry tweeted back confirming  they have not forgotten their commitment, and that a plan will be presented in the coming months. This is an amazing example of what the power of global citizen voices can achieve.

To understand the full story and impact of what happened, let’s start from the beginning - April 2015.

Last year, Global Citizen hosted an Earth Day event on the National Mall in Washington DC, which saw 250,000 global citizens attend. The event focused on ending climate change and extreme poverty. It was the single largest event in Global Citizen history, and it resulted in some incredible commitments.

One of those commitments came from the government of the Netherlands.

On stage, in front of a quarter of a million people, Dutch Minister for Foreign Trade and Development Cooperation, Lilianne Ploumen, committed on behalf of her government to provide 30 million people with clean toilets and 50 million with clean water.

BUT - without a proper plan, the commitment is just a good idea. This is why Global Citizen has been following up over the past couple of months with all governments that made commitments as a result of global citizens’ actions.

Unfortunately, the Dutch government has been the most unresponsive to follow-up requests. The Global Citizen team had reached out to their contacts at the Ministry multiple times and had received only vague responses.

So, on March 22nd, global citizens tweeted at the Dutch Ministry of Foreign Affairs and the Dutch Prime Minister asking them to remember and abide by Minister Ploumen’s commitment including a plan of implementation.

Within hours of global citizens sending tweets, the Ministry tweeted back: 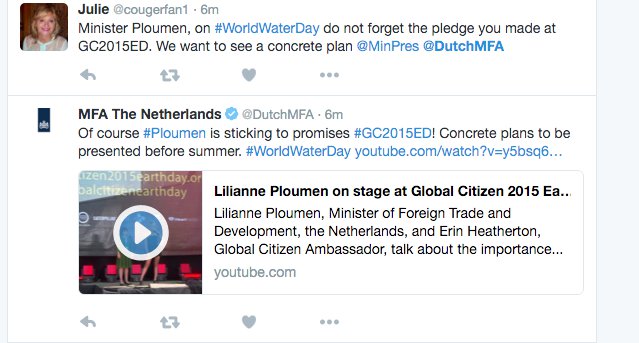 This is an amazing example of the power of global citizens’ voices in keeping world leaders accountable to their commitments. This would not have been possible without the help of global citizens the world over.

To keep the pressure on, the Tweet was changed to thank Minister Ploumen and the Ministry for not forgetting their commitment. Informing them that the Global Citizen team is ready to discuss their plan and that  global citizens around the world will be watching for the final release of the plan.

The next step is meeting with the Dutch government to ensure their planning strategy incorporates the ideas of global citzens from around the world.

You can help secure this meeting by taking action now.