When the Taliban ruled Afghanistan a regime under which musical expression was banned outright. Even after the removal of the Taliban from power there persists a negative perception of music and musicians amongst the country’s conservatives. For the young and creatively inspired this is a perilous state of affairs.To find an output for their musical passions, young people often have to subvert familial and community customs by finding a place to practice in secret.

According to a recent article published on Reuters, this was the case for Negin Khpalwak, a young woman from Kunar in eastern Afghanistan. Initially she felt compelled to conceal her musical activity from her family because she feared they would be outraged if they ever found out. Eventually though, she informed her father of her passion and for art, as well as her desire to pursue it.

Her father surprised her and was supportive.  The reaction from the rest of her family though was not quite so encouraging. After returning home from a performance aired across national television, she was accosted by her brothers and uncles who threatened to beat her for breaking cultural tradition.

"Apart from my father, everybody in the family is against it," she told Reuters. "They say, 'How can a Pashtun girl play music?' Especially in our tribe, where even a man doesn't have the right to do it." 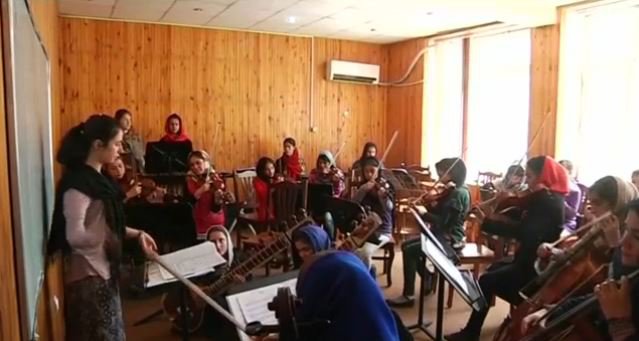 Negin now lives in an orphanage in Kabul, the nation's capital, and is the leader of a 35 strong, all-female ensemble at the Afghanistan National Institute for Music. Many of her peers experienced the same community pressures as Negin, where despite the support of their parents, conservative family members and religious authorities made pursuing music difficult.

Ahmad Naser Sarmast, a musicologist who returned home from Australia after the fall of the Taliban to help found the National Institute for Music in 2010, said: "The bravery of the girls sitting in the orchestra and the leadership of a young female conductor is an achievement for Afghanistan."

Bravery has been needed. A suicide bomb attack in 2014, brought international attention to the plight of female performers in Afghanistan after it targetted a show at a French-run school in Kabul. Sarmast was present at the event and was nearly killed. However, he remains resolute in his belief that the formation of the all-female orchestra was the best response to extremists. Sarmast believes the initiative helps girls like Negin continue their education, despite family tensions.

Negin is emboldened by the support of her small and passionate musical community and confidently declared, "I will never accept defeat." She is committed in her role as leader of the orchestra: "I will continue to play music. I do not feel safe, but when people see me and say, 'That is Negin Khpalwak,' that gives me energy."