Hugh Evans: On a mission to end extreme poverty 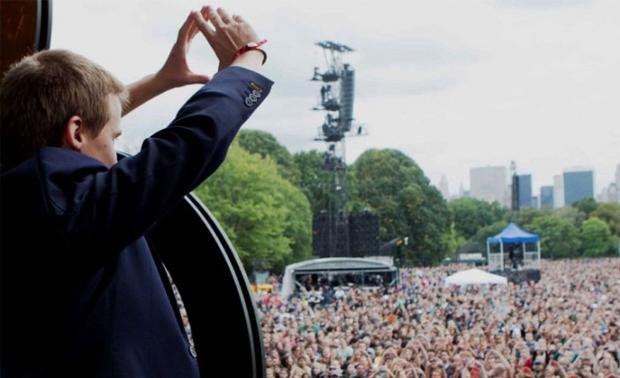 From New York’s Central Park last year to Auckland’s Town Hall on the 4th of August this year, more than a special music event, Global Citizen is a movement. Voted by Forbes as one of the 30 under 30 most influential social entrepreneurs in the world, we caught up with Hugh Evans in an exclusive interview this month to find out why he has such high hopes for New Zealand to be part of the blue sky dream to end extreme poverty in one generation.

Human history has always been shaped by courageous action that began with a rumbling riot of the heart.

In 2008 Australian born Hugh Evans and his friends set out on an impossible dream, with no money and no office, but a determined will to end the suffering of over a billion people living in extreme poverty. The Global Poverty Project began as a grassroots movement that spread to New Zealand, the UK and the US. It grew exponentially and attracted the support of many of the most powerful political leaders, economists and rockstars from around the world.

Last year a massive advocacy event was held on the lawns of New York’s Central Park, harnessing the power of collective voices. Bringing together artists that included Foo Fighters, The Black Keys and Neil Young, thousands of people celebrated the progress in the fight against extreme poverty and urged leaders and fellow citizens to continue to forge forward on this issue. The festival raised a whopping $1.3 billion in pledged donations by organisations and individuals.

The next Global Citizen Concert could have been hosted anywhere in the world, so why New Zealand? Says founder Hugh Evans, “Ending extreme poverty will require more than just an increase in international aid revenues. New Zealand has a history of being at the forefront of change and is seen as a moral leader, from women’s rights to nuclear issues. New Zealand is a small country, but the world watches what you do very carefully. If New Zealand as a nation stands up it is an example for the rest of the international community. And when the international community rises together there is nothing we cannot do.”

As of 2010, the world had 1.2 billion people living in extreme poverty, around 20% of the world’s population.That figure is down by roughly 200 million people since 2005 – driven by effective aid, increased trade from the world’s poorest countries, and improvements in governance and transparency.

But what makes music such a game changer?

“Music transcends age, diversity, gender, geography. It unites and excites us,” enthuses Hugh. “Fundamentally at its core, extreme poverty is a justice issue. We need visionary leadership and symbolic action. And that’s where a country like New Zealand can be very powerful.”