Why This Dead Patch of Grass Is a Good Thing 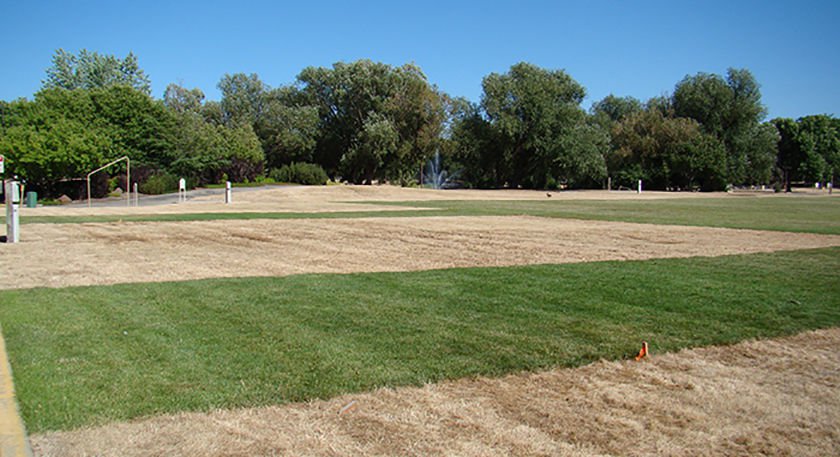 This article was contributed by HP and was originally published here. Images courtesy of HP.

Around Boise, Idaho, locals have plenty to say these days about HP and the look of its local campus—and they’re not happy about it. The landscaping, they say, looks neglected. The grass is dying, everything is turning brown, and HP doesn’t seem to be doing anything about it.

In one sense, they’re right. HP is allowing things to die off. But it’s not due to neglect. Instead, the campus greenery is withering away for the sake of innovation and environmental responsibility. And, soon, things will look much better.

The engineers and forward-thinking landscape architects at HP are taking an innovative approach to the appearance of the campus, one of the company’s largest locations with some 2,500 employees. And a dramatic transformation, which is coming later this year, will renew the grounds for a more beautiful, healthier, and sustainable future.

The company is at the beginning stages of a landscape overhaul that will replace 31 acres (about the same size as an 18-hole golf course) of resource-intensive turf grass with sustainable, native grasses and plants over the next few months. The current landscaping, which was planted in 1973 when the campus was built on top of farmland, requires weekly mowing, lots of water, pesticides, and fertilizer to stay green.

“In the past, planting large fields of grass was the thing to do. It was the aesthetics of that era,” said Steve Birch, West sub-region manager of corporate real estate and workplace services at HP. “Today’s modern landscape design uses a variety of native plants and aims to reduce the environmental impact of maintaining large monocultures of grass fields.”

In May 2016, HP began to let the existing grass die out in order to set the stage for a new collection of diverse native grasses. This began the first phase of the project that will eventually lower the water consumption, energy usage, and pesticides used on campus. 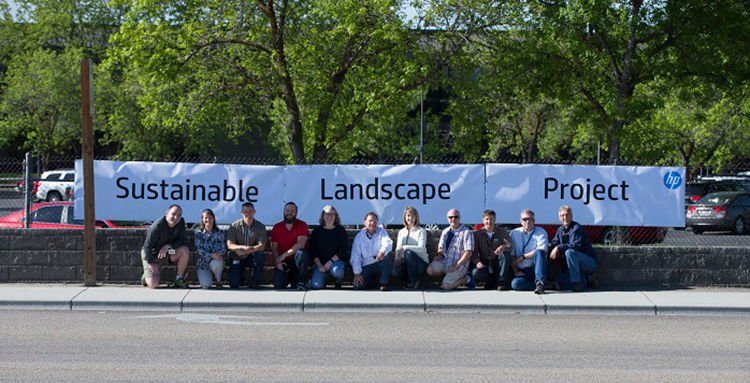 Saving Water on a Broader Scale

The Boise landscape project is part of a broader effort to be better environmental stewards, of which water conservation plays a pivotal role.

Replacing turf with native grasses significantly lowers water consumption, according to Birch. The existing grass requires about 31 inches of water each year to stay green. The new grass will require just four inches of water per year – a reduction of about 87 percent. If necessary, that four inches of water could be cut down to zero “with little to no long-term damage,” Birch said.

This is of particular importance in Idaho, where close to 94 percent of the state is classified as having “abnormally dry” conditions as of October 4.

The new native grasses will be allowed to grow to their natural heights with just some minor trimming needed throughout the year. This means landscapers at HP in Boise will only need to trim about four or five times a year — reducing the CO2 greenhouse gas emissions that comes from mowing a lawn weekly.

“There are less resource-intensive options that are not only ecologically sound but also engaging and beautiful. This does not have to mean rocks and cactuses,” said Birch of the fauna native to the Boise region.

Native grasses and trees, such as the Idaho Fescue, ThickSpike Wheatgrass, Cockspur, Hawthorne, and about a dozen other varieties, will combine for a more diverse landscape. HP is working with the Bureau of Land Management, the Department of Fish and Game as well as other biologists, ecologists, and conservation experts in the community to develop a palette of plants for the specific microclimates of the site.

Honeybees will be special beneficiaries of this newfound biodiversity.

“We even have an active bee club on site with multiple boxes of bees, and we are creating a showcase for a new bee box to raise awareness of the bees,” Birch said. HP plans to minimize use of herbacides and promote conservation so that bee colonies can flourish.

In recent years, bee populations worldwide have declined due to a combination of disease, environmental problems, and pesticide use. According to the National Resources Defense Council, honeybees are responsible for approximately one-third of the food that we eat. Without the help from our little furry pollinators, you would be hard pressed to buy your coffee in the morning.

While the landscaping work is underway, HP aims to help its neighbors in Boise, as well as its employees, understand the bigger impact of the project. Representatives from the company have talked to students from Boise State University and the University of Idaho about what is happening on HP’s site and plans to host tours for elementary and middle-school age students to educate them on the importance of saving the environment.

“We are willing to speak with anyone who is interested in how essential this project is in saving the environment,” Birch said.