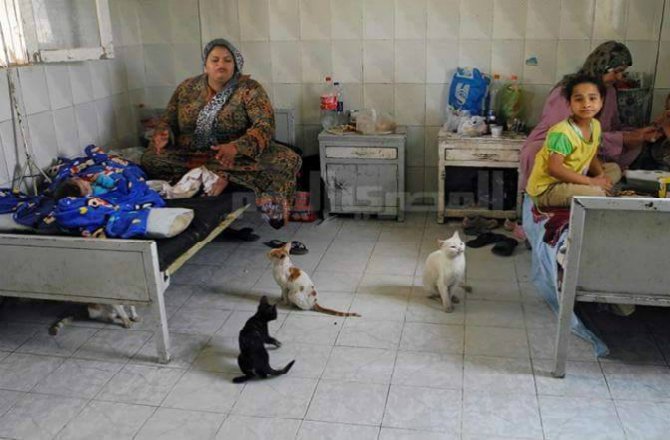 Mohammed El Garhey, an Egyptian television producer, came up with the idea to use Twitter to raise funds for a new medical center in order to “alleviate the suffering of his fellow citizens” back in 2012.

El Garhey was involved in covering events that led to the 2011 Egyptian revolution and the Arab Spring. Following the revolution in Egypt that removed dictator Hosni Mubarak from power in Egypt, the country’s healthcare system has been largely neglected. Political and economic instability continue to affect the poor state of the country’s health services.

In June 2015, a viral Facebook page posted photos that brought attention to the shocking conditions inside government-run hospitals.

Among other things, this neglect means that people who can’t afford private doctors or live in remote areas cannot access quality care.

Egypt also has the largest number of Hepatitis C cases in the world, with over 9 million people infected. Hepatitis C is a virus that causes liver infection and can lead to liver cirrhosis or cancer. While antiviral medicines can treat the disease, many people lack access to treatment or go undiagnosed.

In order to offer decent and affordable healthcare, El Garhey, who has 225,000 Twitter followers, started an online campaign in 2012 to raise funds to build a hospital in El Shabraween, a village 110 kilometers to the east of Cairo. On Twitter, El Garhey said he would go to anyone who wanted to help out and called his initiative “The Goodness Taxi.”

Over the last 4 years he has raised over 5 million Egyptian pounds ($636,000 USD) on Twitter. The funds are being used for construction of an 8 story medical center and for purchasing medical equipment. The hospital can potentially treat patients in Shabraween and neighboring villages who don’t have access to health care.

He currently meets with volunteers and locals every week to discuss the village’s needs and plans on opening the hospital by January 25th, 2017, the 6th anniversary of the Egyptian revolution.

El Garhey is a firm believer in social media’s power to cause change.

“We faced difficulties each step of the way. The presidency in mid 2015 granted us permission to continue building up to eight floors when it had originally stopped the project at three floors. It only worked because of social media pressure,” El Garhey told Quartz.

Twitter and other social media platforms continue to be an important resource for Egyptians since the 2011 revolution. Despite frustrating red tape and bureaucracy, he has pushed on with his mission of expanding health care for Egypt’s most vulnerable.

Raising funds isn’t easy in a country marked by political and civil unrest, but El Garhey serves as an important example of how social media influencers can use their large followings to further important causes. His actions can inspire others who hold the same power to rally the public and inspire action.