"If you live in the Arctic, you're on the frontlines of climate change."

Why Global Citizens Should Care
The Arctic is the world’s warning system when it comes to climate change. As the region melts, the rest of the world is likely to face catastrophic consequences, a possibility that the UN urges countries to avoid by curbing greenhouse gas emissions. You can join us in taking action on related issues here.

Nowhere on Earth is warming faster than the Arctic. Each passing year brings broken heat wave records, ice sheets shrinking to new lows, and bizarre ecological shifts that can only be explained through climate change.

With atmospheric carbon dioxide recently reaching its highest level in 3 million years, the region could soon become ice-free during the summers.

Such a prospect would cause devastating global consequences. Already, the region’s deterioration is creating problems for the rest of the world, disrupting fragile ecological and climatic balances that have taken shape over millennia.

The region, which has lost nearly half of its sea ice since the 1970s, has become an ecological warning system. The more the region melts, the less chance that humanity has to curb climate change.

“If you live in the Arctic, you’re on the frontlines of climate change,” Mark Serreze, director of the National Snow and Ice Data Center (NSIDC), told Global Citizen. “It’s the place on the planet where it’s the most obvious right now. There’s nothing theoretical about it, there’s nothing political about it — these are just the facts about what is going on up there.

“It’s pretty hard to weasel your way out of them,” he added.

Here are six global consequences caused by the melting Arctic. 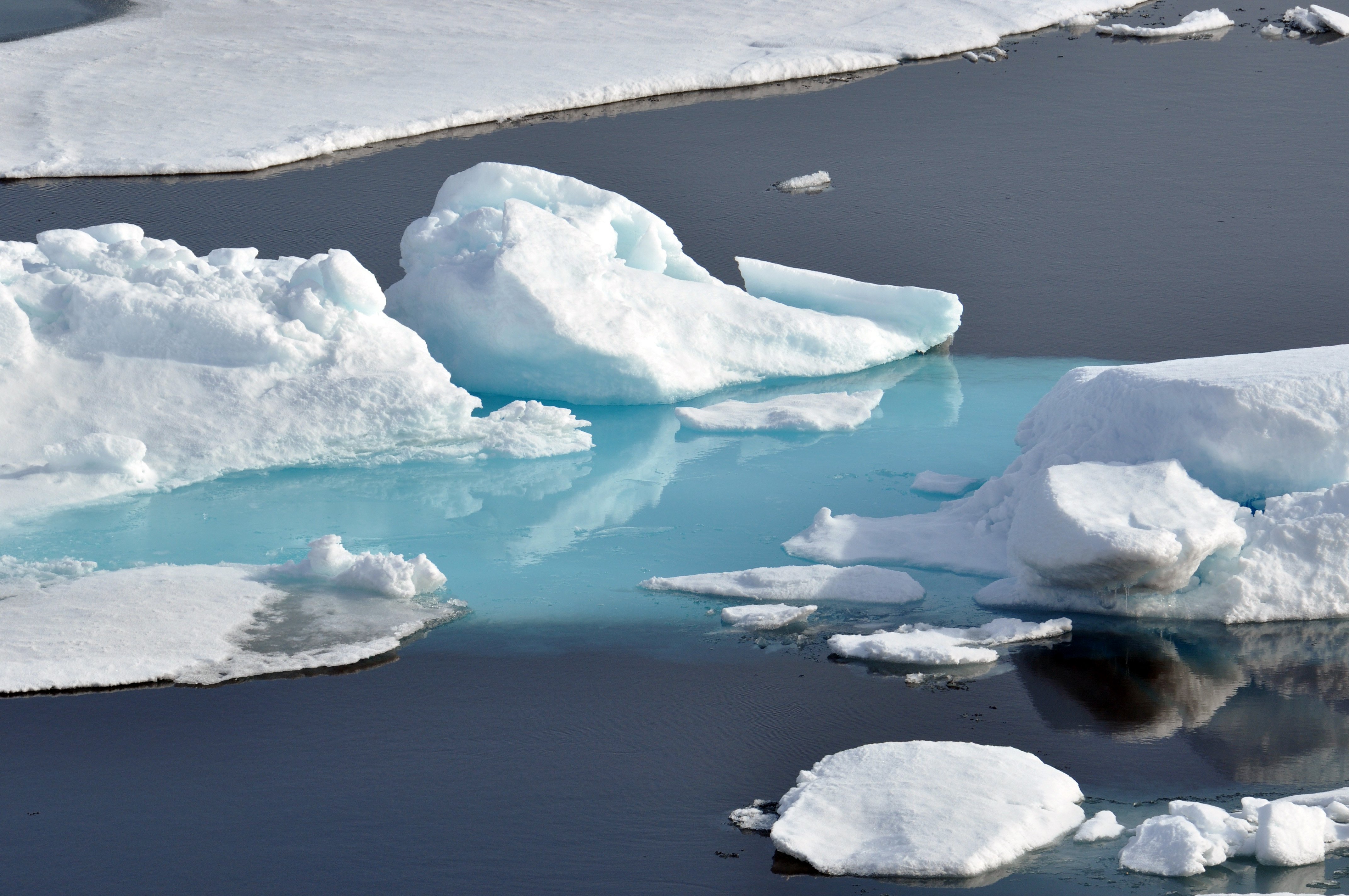 As the Arctic becomes warmer, the global jet stream — massive currents of wind that shape weather patterns around the world — is changing.

“What we’re doing is screwing around with that deep gradient, and if we do that, something has got to give,” he said.

Julienne Stroeve, a senior researcher at NSIDC, said that both the speed and waviness of the jet stream is changing, which is causing extreme weather to become more frequent around the world.

Many of the extreme droughts, heat waves, and cold fronts in recent years are likely the result of the altered jet stream, she said.

“These changes that we’re seeing are really accelerating,” Stroeve said. “I feel like we’re running out of time to try to preserve the current climate state that we’ve been living in.”

In addition to the jet stream, massive bodies of cold air and low pressure above the North and South Poles known as the “polar vortex” are being disrupted by warming global temperatures.

In recent years, warm air has caused the polar vortex to fragment, sending frigid weather to southern parts of the world. Think of the blobs in a lava lamp breaking apart.

The link between the breakdown of the polar vortex and extreme weather events has been demonstrated through several studies. Because the polar vortex exerts a cooling pressure on the Arctic, its deterioration is intensifying existing warming trends throughout the Arctic, creating a powerful feedback loop, according to Stroeve.

In recent years, this phenomenon has caused devastating cold spells in parts of Europe, North America, and Asia. 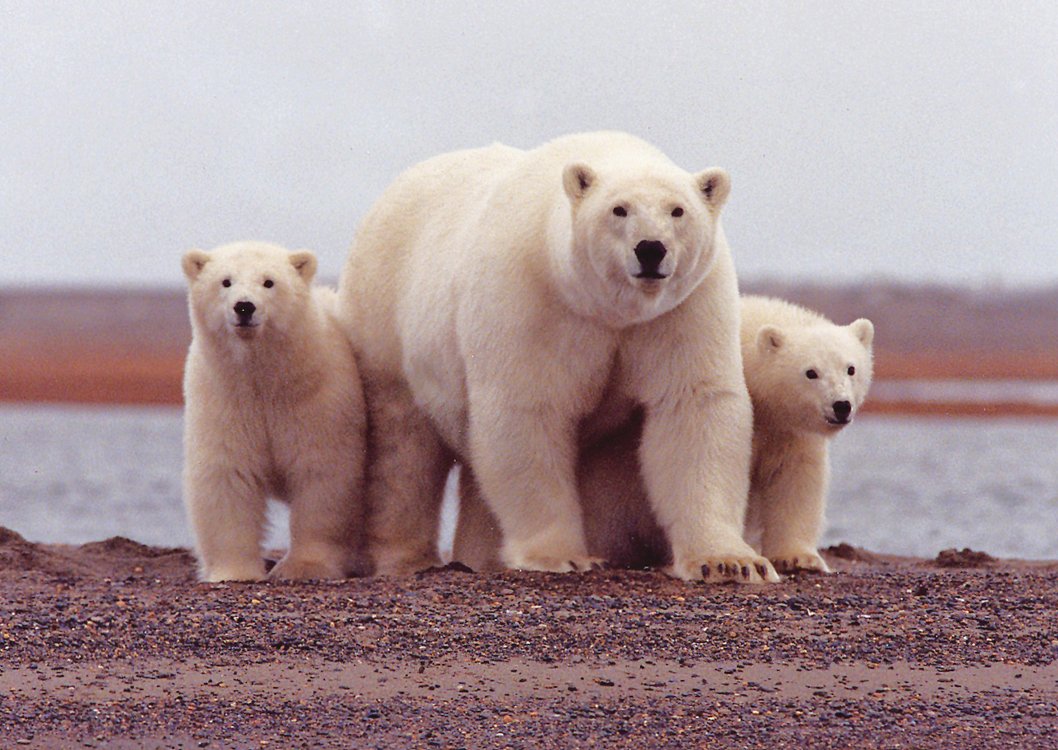 The Arctic food chain depends on stable ice conditions. As nature documentaries have made painfully clear in recent years, predators like polar bears and walruses have struggled to adapt to receding ice levels.

In David Attenborough’s new series Our Planet, walruses can be seen plunging from steep cliffs to their deaths as a result of the chain reactions caused by climate change. Serreze said the walruses would normally be found on ice sheets, from which they would dive to the bottom of the Arctic ocean to dig for clams. But the ice has receded so extensively in recent years that they’re forced to cluster on meager strips of land.

Read More: 6 Powerful Moments From Netflix's 'Our Planet' That Show the Urgent Need for Climate Action

“They don’t know what they’re doing— they’re just walruses, and they fall off these cliffs and get killed,” he added.

Other animals and plants are being harmed by the warming climate in ways that could undermine the entire Arctic food chain.

“The sea ice kind of insulates the ocean,” Stroeve said. “If there’s snow on the ice, it blocks the sun from going into the ocean, which influences when algae grow and phytoplankton blooms, and that affects the entire food web.”

In recent years, adult krill populations have declined by 70% to 80% in some areas.

As the ice melts, marine creatures that would normally never venture so far up are entering the Arctic.

Some of these animals are popular commercial fish, which could lure fishing expeditions into the Arctic, further degrading ecosystems.

“Changes are happening all throughout the food chain,” Serreze said. “Ecologically it’s not that it’s change that’s bad; it’s the rapidity of change, the suddenness of change. We’re having environmental changes over the space of 30 years, rather than over the space of 3,000 years.” 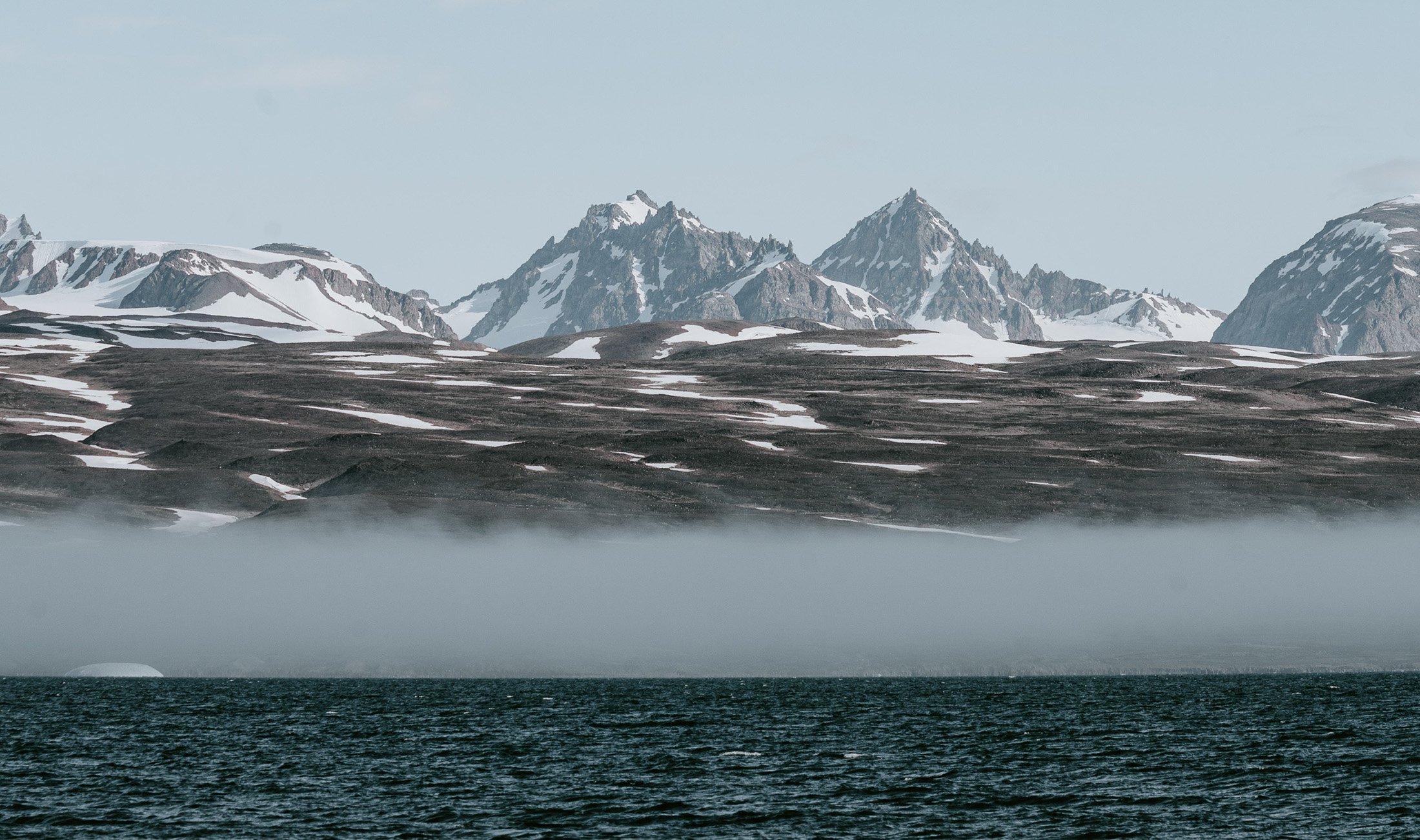 In the Arctic, as sea ice gives way to water, more sunlight is being absorbed, causing more ice to melt, and so on.

This localized warming is setting the stage for a massive new feedback loop, according to Serreze — essentially an endless cycle of cause-and-effect of climate change.

“It’s a feedback loop,” he added. “You warm it up, thaw permafrost, microbes become active, and there’s more carbon dioxide.”

Read More: 1 Million Animals and Plants Could Go Extinct Because of Humans: Report 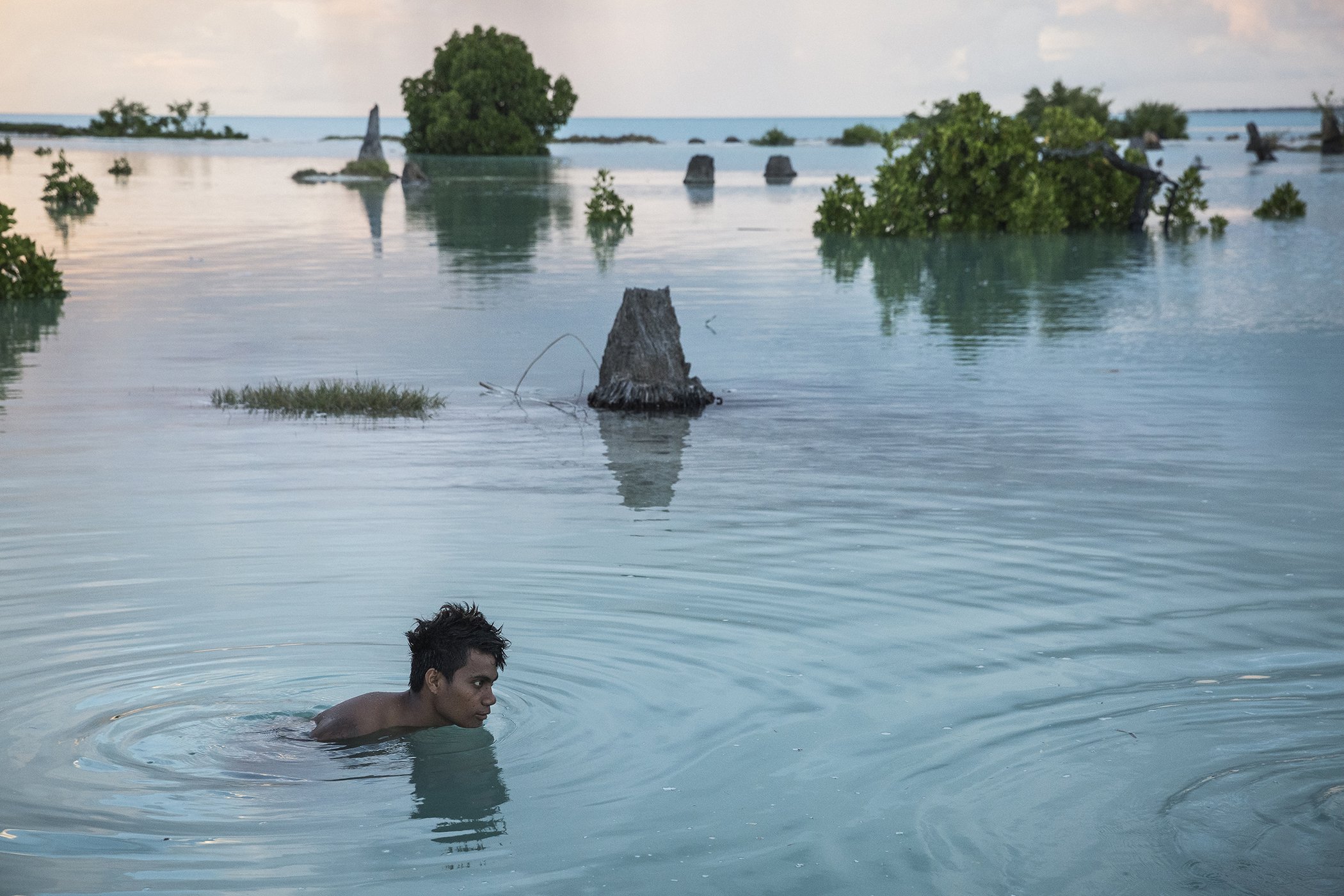 Peia Kararaua, 16, swims in the flooded area of Aberao village in Kiribati, one of the countries most affected by sea level rise. During high tides many villages become inundated making large parts of them uninhabitable.
Image: Vlad Sokhin/UNICEF

The sea ice melting throughout the Arctic won’t in itself raise global sea levels. That’s because it’s already sitting in water.

But as the Arctic’s warming speeds up the general warming of the planet, land ice in areas like Greenland is beginning to melt at an accelerated pace. In fact, Greenland is melting twice as fast as it was a decade ago. The country’s glaciers hold enough water to raise global sea levels by 23 feet.

“These changes that we’re seeing are really accelerating,” Stroeve said. ”I feel like we’re running out of time to try to preserve the current climate state that we’ve been living in.

“We need to get smart about our emissions and rescue them dramatically so we don’t cause irreversible change,” she added.

Read More: 12 Female Climate Activists Who Are Saving the Planet

Image: Sean Sheridan/Food for the Hungry

Climate change affects life for everyone on the planet, but it’s the world’s poorest and most marginalized who will face the brunt of these impacts, according to Stroeve.

Sea level rise and extreme storms threaten to displace hundreds of millions of people by 2100.

These consequences are already affecting people living in extreme poverty. In Mozambique, for example, Cyclone Idai, the most brutal cyclone to hit the region in decades, recently destroyed the farmland of 1.7 million people, setting the stage for long-term food insecurity. Severe and unusual droughts in parts of the world have helped fuel conflicts that have displaced millions of people. And sea level rise in countries like the Indonesia is destroying the livelihoods of millions of people.

In the past, the Arctic seemed remote, far away from human civilization. But now that the region is melting, powerful environmental forces are being unleashed that are being felt with greater intensity each year.