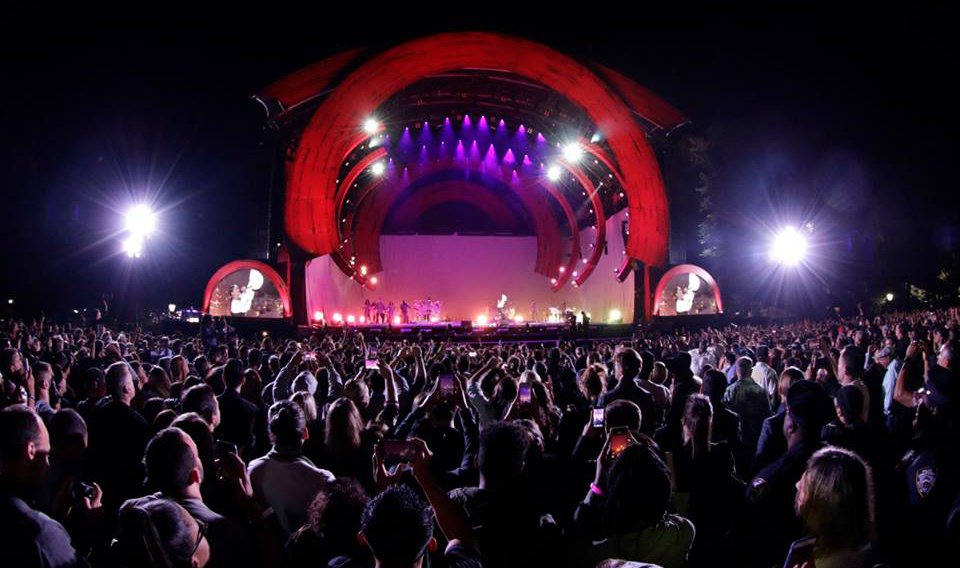 The Global Citizen Festival is probably the most unique music festival ever. Attendees earn tickets, rather than hope for the best in Ticketmaster queues, by taking actions to help solve the world’s biggest problems on our site and in our app. As a result, a lot of good stuff happens.

This year, many of the actions that Global Citizens took required more effort and were designed to create more of a collective roar than in years past. And judging by the numbers, it looks like it worked.

In the three months leading up to the festival, Global Citizens made videos denouncing sexist laws, visited libraries to advocate for refugee education, called politicians to demand increased funding for polio, and so much more. Petitions were signed, tweets were sent, the Global Citizen community grew, and impact was measured.

Even Rihanna got in on the action taking.

Read More: Rihanna Just Got France to Make a Huge Commitment to Education

Overall, 1.3 million actions were taken by Global Citizens in the fight to end extreme poverty and achieve the Global Goals. Over a week of Global Citizen events, $1.9 billion worth of commitments and announcements are set to reach 199 million people.

Many of announcements concerned the accountability of past commitments, which is important because many commitments are staggered over several years and remain uncertain until they are fully carried out.

But what’s happening behind these mammoth numbers? How will the promises made actually affect people living in extreme poverty?

The biggest commitments and announcements of the festival focused on sanitation, women’s economic empowerment, and education, and they came from a diverse blend of governments, NGOs, and corporations, showing that progress can only come through collaboration.

2.4 billion people, or 35% of the global population, do not have access to adequate sanitation around the world, which is both a cause and consequence of poverty. People living without adequate sanitation face endless threats to their health. In fact, 801,000 kids under the age of 5 die each year because of diarrhea. 88% of these cases are traced to contaminated water and lack of sanitation.

Global Citizens took 60,000 actions demanding this commitment be fulfilled, holding the country accountable. The Dutch government responded by committing to spend $100 million per year, for at least three years, toward fulfilling their pledge.

The Netherlands specifically announced that it will donate $50 million to the Water Supply and Sanitation Collaborative Council over the next five years, which will help five million people.

WSSCC, a collaborative of more than 150 countries, separately committed to ending open defecation for 15 million people by 2020.

Two countries that have high open-defecation rates, Nigeria and South Africa, both committed to end the dangerous practice by 2025, and 2030, respectively.

At the 2014 festival, the World Bank committed $15 billion to improve global water and sanitation. More than 50,000 actions — emails and tweets — were taken by Global Citizens and the World Bank confirmed that $6 billion has been disbursed, reaching 100 million people.

Globally, 61 million kids are denied a primary school education, and 202 million are missing out on a junior and secondary school education. The consequences of leaving school early affect a child throughout his or her life and can be particularly detrimental to girls who often end up in child marriages or with adolescent pregnancies that keep them in a rut of poverty.

The global education deficit is worsened by an unprecedented refugee crisis.

With all this in mind, Global Citizens were eager to promote the value of education when calling for the support of world leaders. More than 350,000 education-related actions were taken by Global Citizens that generated 15 commitments and announcements.

The week before, Global Citizen held its first concert in Canada that focused on raising funds for The Global Fund to fight infectious diseases. Canada showed up again at the 2016 Global Citizen Festival with a C$20 million commitment to the Education Cannot Wait Fund, which was launched this year by UNICEF to bring education to the 13.6 million children and youth in emergencies and crises.

Denmark also committed $11.3 million to the fund by drawing on its humanitarian aid budget.

Rihanna spurred France to get more involved in the fund and Queen Rania of Jordan announced that $42 million will be disbursed by the fund in 2017, affecting 1.5 million children over two years.

Other commitments and announcements were made to achieve quality education more broadly, especially for girls.

US First Lady Michelle Obama showed up via video to encourage Global Citizens to continue their support of #LetGirlsLearn.

Rihanna became a Global Ambassador for the Global Partnership for Education where she will advocate for bringing quality education to underdeveloped countries.

Australia signed on to The Girls’ Education Statement of Action and committed AU$10 million toward improving access to quality of education for girls in the Indo-Pacific region.

Global Citizens also called on corporate leaders to join the effort to provide universal education. HP is committing $1 million in technology and training to help refugees and alleviate poverty in the coming year. Western Union is giving a $750K grant to the Whitaker Peace and Development Initiative so they can bring their progressive education model to a refugee camp in Northern Uganda.

Microsoft, meanwhile, made five commitments to support refugees, including to deliver counseling and psychosocial support for 10,000 refugees and migrants in partnership with Mercy Corps. They also committed to provide free Skype translator support for partner relief organizations. They also promised to provide digital literacy and computer science for 60,000 young refugees via Youthspark, the Arabic to German language training program. They are also funding 20,000 refugees to complete Imagine Academy Training, a globally recognized technology certification, in partnership with Pearson. Finally, the tech giant promised to create an innovation hub in a crisis affected area to provide local refugees with networking, technology and entrepreneurial skills training to access and pursue jobs in technology.

Finally, Princeton, Harvard, Hult, and Indiana universities will be accepting more refugees in the years ahead. Argentina is granting 1,000 tertiary scholarships to students through Global CItizen’s partner, Blue Rose Compass.

Girls and women around the world are denied equal opportunities, routinely discriminated against, and face countless injustices. Each year, campaigning for gender equality is a primary objective for Global Citizen.

This year, our campaigning focused in part on “leveling the law for women in various countries to prevent discrimination.

Calls to action were made on the stage to outlaw child marriage in Tanzania, end honor killings in Pakistan, expand the UN’s and Commonwealth's commitment to empowering girls and women, and support the Global Goals’ provisions for gender equality.

"I am also determined to achieving gender equality by strengthening legal frameworks and tackling sexist laws that hamper women’s opportunities," said Baroness Patricia Scotland, Secretary-General of the Commonwealth. "Laws that restrict their ability to own property, open a bank account or have legal protection from abusive practices like child marriage and honor killings.

One of the biggest victories came from the private sector after 30,000 Global Citizens called on corporate leaders to support women-owned businesses. Johnson & Johnson, UPS, and Walmart responded to the call by each committing to spend $100 million on goods and services from women-owned companies over the next three years.

Since just 1% of money spent by businesses and governments goes to women, these investments will make a tangible difference. In fact, these commitments totaling $300 million are set to affect 240,000 lives by 2019.

On a different note, Global Citizen has been campaigning on behalf of the Yazidi people ever since ISIS attempted genocide in 2014. More than 40,000 Global Citizens over the past three months called on Belgium to refer this case of war crimes to International Criminal Court and the Deputy Prime Minister of Belgium, Alexander De Croo, announced that Belgium is favorable of bringing this case to the ICC

Polio has been a major target for Global Citizen since before the first festival in 2012. Over the years, we’ve secured major commitments to eradicate this debilitating disease and we’re right on the verge of winning.

Polio is 99.99 percent eradicated and only exists in remote parts of Afghanistan and Pakistan and only minimally in Nigeria.

But the world cannot get complacent. That’s why Global Citizens took more than 134,000 actions calling on leaders to invest in the fight against polio.

Luxembourg responded by committing at least €2 million for the Global Polio Eradication Initiative, which will affect the lives of more than 3 million people. Malta made a commitment of $30,000 and called on other countries to step up their commitments. And Canada’s Prime Minister Justin Trudeau showed up via video to announce his commitment to ending the disease.

“Canada has long supported efforts to fight polio, which is now 99.9% eliminated,” Trudeau said. “And we will be a strong partner through to the end. Thank you for keeping these issues on our global agenda. Keep calling, keep tweeting, keep lighting up our switchboards. We're listening, and we're taking action. You've shown to the world that change starts with you. Together, we will end it for good.”

750 million people around the world do not get enough food to eat and millions more are malnourished. Lack of nutrition is both a cause and result of poverty, and Global Citizens this year took nearly 194,000 actions relating to food and hunger.

Global Citizen Festival host Chelsea Handler rallied a call to action driving 13,000 phone calls and tweets to the government of Italy, if made, Italy will lead the push to fulfill the G7’s 2015 promise to lift 500 million people out of hunger.

More than 100,000 actions by Global Citizens spurred US Senators Charles Schumer (D-NY),  Bob Corker (R-TN) and Christopher Coons (D-DE) to work for greater food aid reform. Earlier in the year, Global Citizens secured a major victory when the Global Food Security Act was signed into law by President Obama after years of campaigning and action-taking.

Overall, 44 announcements and commitments were made during the 2016 Global Citizen Festival all thanks to the dedication of Global Citizens everywhere. These actions helped secure $1.9 billion and are set to reach 199 million of the poorest and most vulnerable people around the world.