At Madame Metty's food stall you can buy coffee, cakes and use the toilet! 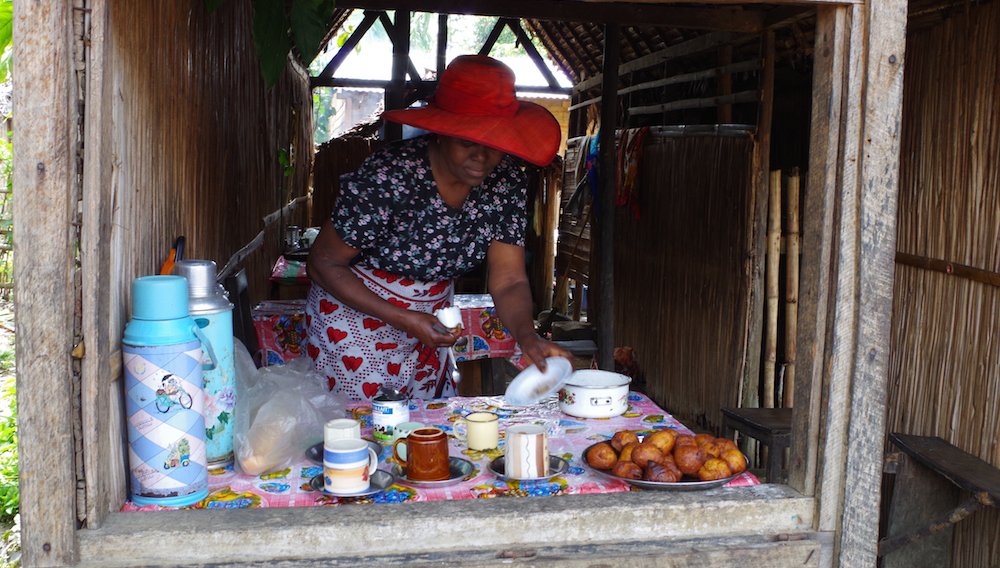 Madame Metty runs a food stall in Ampasimbe Manantsatrana in the east of Madagascar. She serves coffee, cakes and light meals to her customers in a seated area in the front. Out back, she has a brand new toilet of the best quality possible for use by her customers. 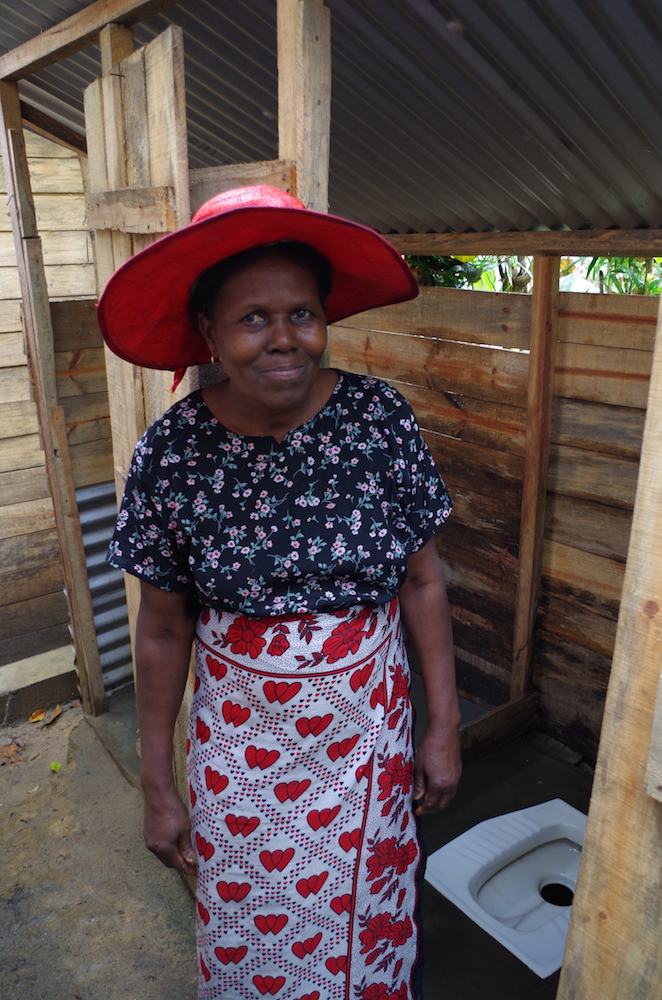 “I sell food and I was worried that the chickens would run into the basic latrine, which was in bad shape, and bring feces into the kitchen.” A community-led total sanitation triggering by the Global Sanitation Fund helped Madame Metty understand that the health hazards for her and her customers could only be reduced if she owned a clean and well-built toilet, breaking the bad cycle of fecal contamination. In December 2012, she decided to take matters in her own hands and built a latrine. A mason from this commune dug the pit and it cost her 400,000 Ariary (around $180) to build. Malagasy women are known to their friends by their first born child’s name, so Madame Metty is also called “Maman de Zina” and that’s also the name of her food stall. It’s a popular place in town, and now even more so with the improved facilities. The mayor of Ampasimbe, Mr. Jacob Honoré says the whole town has changed in recent times: “Before when you entered the village you smelt poop. That’s the sign, now there is no smell anymore.” 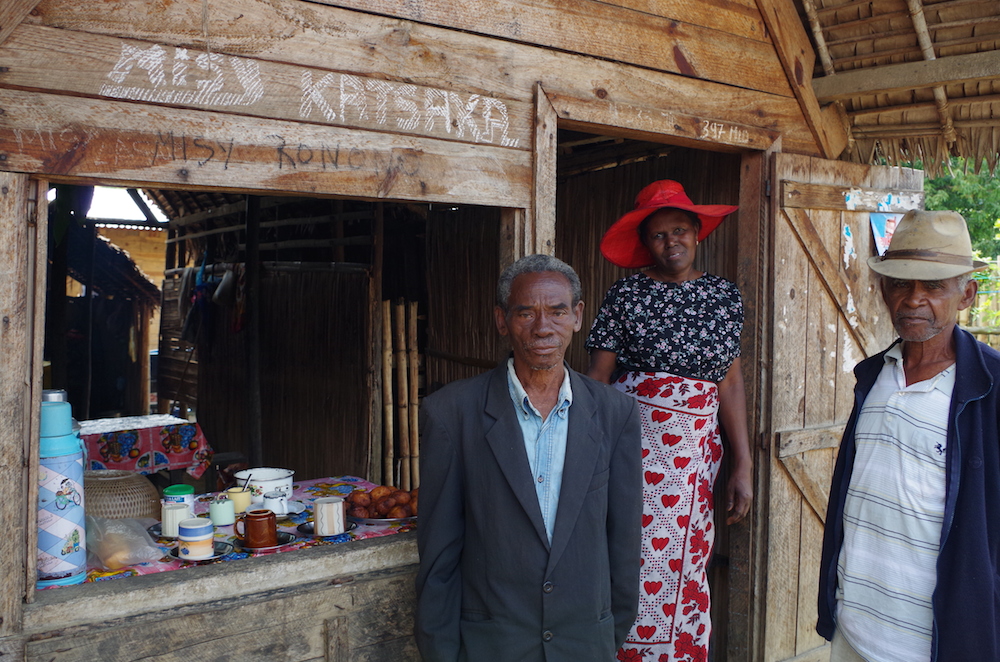 The national program supported by Global Sanitation Fund in Madagascar is known locally as the Fonds d’Appui pour l’Assainissement (FAA). During 2014, the GSF-supported program worked with 17 GSF Sub-grantees. Activities carried out focused on scaling-up community-led total sanitation (CLTS) and sanitation marketing to support communities to improve the quality of their latrines. The work of the Global Sanitation Fund has resulted in 7,000 clean villages and 900,000 people living in open-defecation free environments. 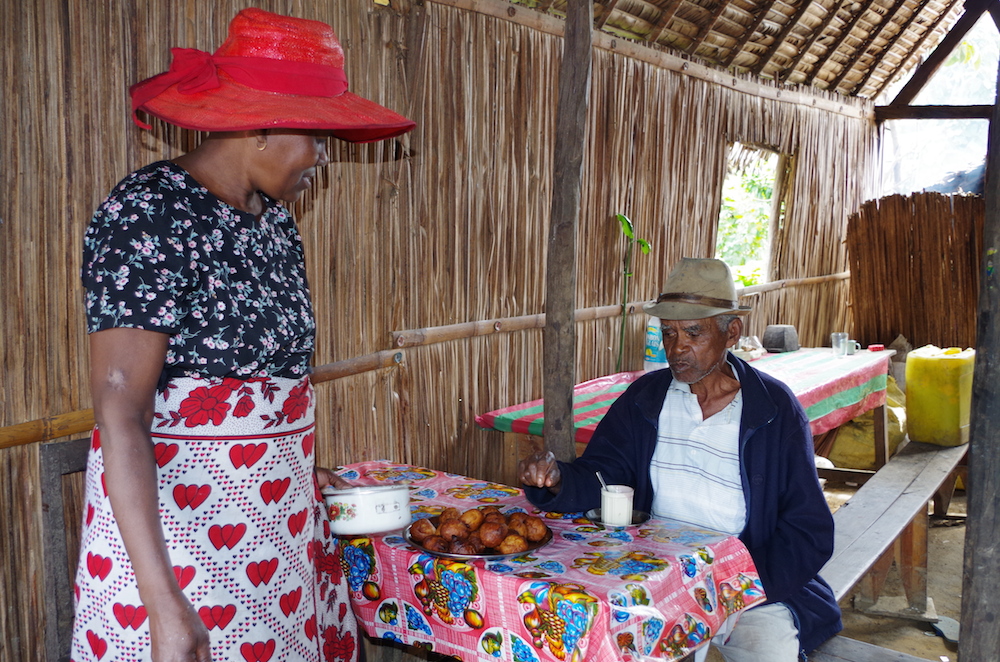 Mayor Honoré has led his community to embrace the sanitation movement. He said it was hard for people to change their behavior: “People were not accustomed to using a toilet, they preferred to just defecate in town. It was a struggle to get people to change.” He introduced a ban on open defecation and on litter, enforced by the natural leaders and chiefs. The local policeman monitors the Dina or internal law and anyone who doesn’t follow it is brought to the Mayor’s office. Offenders have to pay a fine of 30,000 Aviary (about $13). If they are caught in the act of openly defecating, the fine is 50,000 Aviary (about $22). 20,000 Aviary (around $9) are awarded to the person informing on the defecator. In addition to the fine, the perpetrator is obliged to build their own latrine. The streets are now much cleaner and the Mayor says he has noticed a difference in the health of villagers.