Galle and Schneider are using the medium of film to try and effect change. 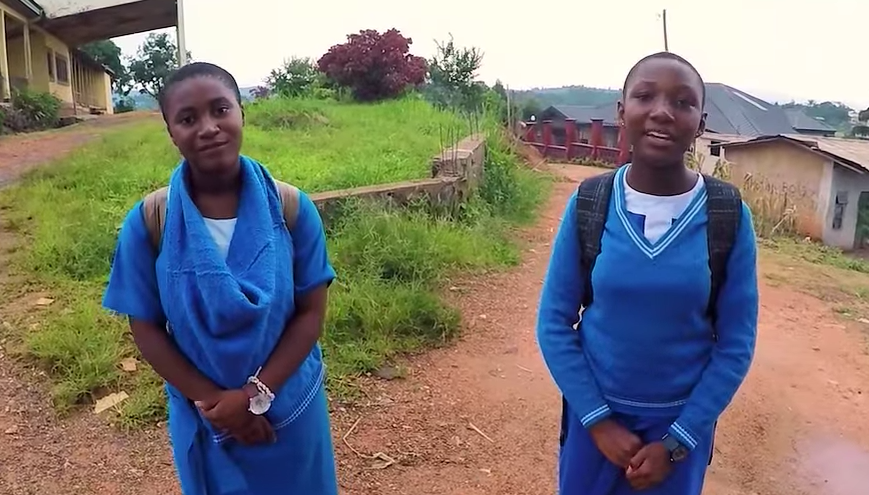 In a culture where child labor, sexual harassment, and rape are deeply embedded social issues, two teen girls with a camera and microphone may not seem like they could do much to effect change.

But for Galle Mambo and Shneider Remi Adams, two budding filmmakers in Bamenda, Cameroon, asking tough questions about their culture and seeking answers from leaders about how to make change has begun a conversation about the future of their culture.

The teens worked with the local nonprofit Advice Media, which trains students in journalism and advocacy, to create a documentary film called “Hidden Truths: Exposing Cultural Practices That Hurt Teen Girls in Cameroon” about some of the gender-based issues teen girls face in their community.

In the film, they ask community leaders and citizens alike about the issues of child abuse, rape, and, something many children face — being forced to work in a market selling goods rather than attending school. The girls also interviewed people about the practice of breast ironing — where a girl’s breasts are pressed with fire-hot objects like spatulas and cooking spoons to flatten them..

They speak to people who’ve endured these practices and now are working to stop them.

The film is available online and has been shown at international conferences discussing the future of Cameroon.

Watch the documentary below, and then check out what Gaelle, 16, and Shneider, 15, told Global Citizen about what it’s like growing up in Cameroon, how they made their film, what changes they think need to be made in their country, and what they hope to achieve in the future.

Why did you decide to focus on gender inequality?

Shneider: We decided to focus on gender inequality because it is a very sensitive topic for us Africans and it is a topic that affects all women. What I mean is that a lot of women have experienced and are still experiencing issues pertaining to gender inequality. In Cameroon, many people don't talk about the problems. We want to share them with the world so that people everywhere know the truth about how our women are treated.

Can you explain the challenges facing girls in Cameroon?

Gaelle: In my society, when a girl is raped, she is being blamed for it. If she brings her problem to someone she's asked questions about where was she before being raped, at what time was she raped, and what was she wearing? These questions are just a few examples of what girls are asked. This is called victim-blaming, and it means that girls and women are blamed for what's been done to them instead of the men who commit the crimes.

Rape at times happens as a result of hawking, which is selling goods in the market or on the street. Men call female hawkers to dark corners under the pretext of wanting to buy their goods but then they rape them instead.

Shneider: Many people still have the mentality that a woman's place is in the kitchen. This means that boys and girls are treated different ways. Then there's rape which mostly affects girls (although it affects some boys, too). Some cultures still carry out harmful practices like female genital mutilation (F.G.M.) and breast ironing, which is a practice where mothers and grandmothers iron their daughters' breasts to try to keep them looking younger. Also, some tribes still don't believe in the education of the girl child, which means many girls aren't being educated. And then there's also the practice of child brides.

How did you find your subjects to interview?

Shneider: We spoke to many of our classmates and other people in our region about the challenges they thought girls faced in the society. We also spoke with leaders from many countries and in our own country who work with women.

Gaelle: Our Advice Project founder Melissa Banigan always says that the ideas we focus on about should hit us in the gut. I find subjects whose words and actions will hit me in the gut and then I always just know the questions I wanted to ask.

How are you helping girls in Cameroon?

Gaelle: Currently we are writing articles which the Advice Project will post and we're also making a new movie to show people what girls really go through in Cameroon.

Shneider: Our articles are published on the Advice Project Media website so that the world to see what girls and women are going through in our country, and we hope that people will want to help by giving us paid opportunities to tell our stories, or in any other way possible.

What do you think needs to be done to help improve the status of girls and children in Cameroon?

Shneider: There has to be given general encouragement to people to educate girls. Girls and boys should be given equal opportunities and more girls should be encouraged to stand up for themselves and their stories.

Gaelle: I think girls all over the world should go to school and attain at least an Ordinary level certificate. I believe the Cameroonian government has also done a lot by constructing government schools where school fees are very moderate as compared to private and other mission schools. Also, the formation of the new penal code where a parent will go to jail if he or she denies any of their children the right to an education.

Did you run into any challenges or difficulties while filming your documentary?

Gaelle: Actually, we did because we had already started school when we started filming. School takes almost the whole day so we had to meet in the afternoons and evenings so that we could also film. Girls are usually expected to be home at sundown, but our families had given their permission for us to work even harder. We were tired, but it was for a good cause. Also, we filmed during the rainy season, which meant we had to film between rain storms, and there was also a lot of roadside noise, which was also a hindrance.

What do you hope to be when you grow up?

Shneider: I hope to be a pharmacologist  or an engineer in the future.

Gaelle: I’m not sure exactly what I want to be, but something in the sciences.

What should the world understand about your topic, girls in Cameroon?

Shneider: The world should understand that we still have a long way to go in Cameroon before girls are treated as equals to boys. We especially have a long ways to go in our homes, families, and villages. But girls here are now speaking up and people will have to listen to our cries.