Here Are 23 Photos of Holi, the Most Stunning Holiday Ever 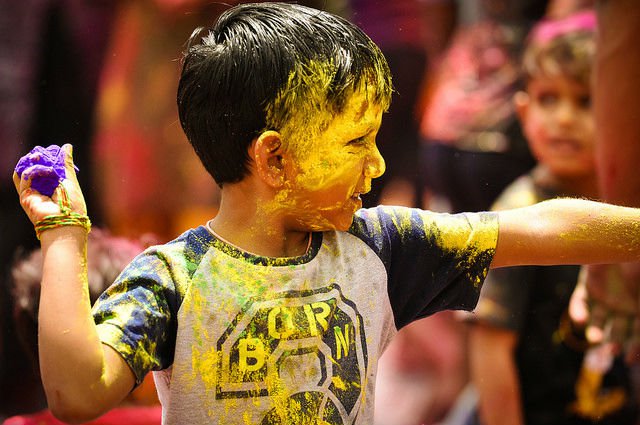 Streams of dazzling magenta, sapphire, and marigold powder filled the air, covering the faces of millions who flooded streets throughout India and parts of Nepal during traditional celebrations of Holi Festival over the weekend.

Each year, Holi, the “Festival of Colors” takes place in spring as part of the Hindu religion. In addition to the festival’s notorious brilliance of color, the deeper meaning of the festival symbolizes love and the triumph of good over evil.

Holi occurs each year in relation to the cycle of the moon, falling on the last full moon of the Hindu calendar year.

The festival is made up of two parts. On the eve of the festival, Holika Dahan, pyres are erected and logs and dung-cakes burn to symbolize good overtaking evil. The following morning, Rangwali Holi begins, kick off a vibrant day of color-throwing celebrations.

Holi has been around for centuries. Today it is celebrated all over the world from its traditional roots in Braj mountain region to New York City and Rio de Janeiro.

While the festival is light-hearted in nature, The Guardian reports a darker side of Holiwhich deserves mention. Though Holi is a celebration of love and good, violence against women in India is still a major concern, and women have complained of sexual harassment and assault with little action from the police during the celebrations.

“I was deeply agitated, but the police said they couldn’t lodge a case. They said it was Holi – they couldn’t do anything about it,” Shristi Satyawati told the Guardian.

Each year, 34,000 women in India report rape, while 70% of women report domestic violence. Let’s take the time while celebrating love and kindness in the world to remember how important it is to protect these women.

Here are 22 more images of the stunning festival of love and color.