HARARE, Aug 6 (Thomson Reuters Foundation) — When she discovered she was HIV-positive early this year, sex worker Evelyn Msipa, 32, was alone in her rented apartment in Zimbabwe's capital Harare.

She wept on seeing the result from the self-testing kit she had used, then rushed to a local health center where she received counseling before the diagnosis was confirmed.

Msipa bought the kit from a pharmacy as she had been afraid to find out her HIV status at a public clinic, and is one of a rising number of Zimbabweans using self-testing kits.

Under an initiative launched in 2016, the kits are sold for $3 to $5 in pharmacies and are free at public health centers as part of a drive to ensure 90% of Zimbabweans know their HIV status by 2020 and receive treatment quickly if needed.

Take Action:  It’s Time to Deliver on the Promise of Universal Health Coverage

"Being HIV-positive is not a death sentence after all — I know now. Nobody can tell that I have HIV because I look healthy," Msipa told the Thomson Reuters Foundation.

Msipa said her decision to use a self-testing kit had influenced other women she works with to follow her example.

UNAIDS data shows about 1.3 million of Zimbabwe's population of 16 million are living with HIV, including some 740,000 women. About three-quarters get antiretroviral therapy that can suppress the virus that leads to AIDS.

New HIV infections have nearly halved since 2010 and AIDS-related deaths have fallen 45%.

The government hopes self-testing will lead to more people starting early treatment for HIV and ultimately lower the prevalence of HIV infection in Zimbabwe.

"It is a good way to reach a lot more people," said Angela Mushavi, a doctor with the Ministry of Health and Child Care. 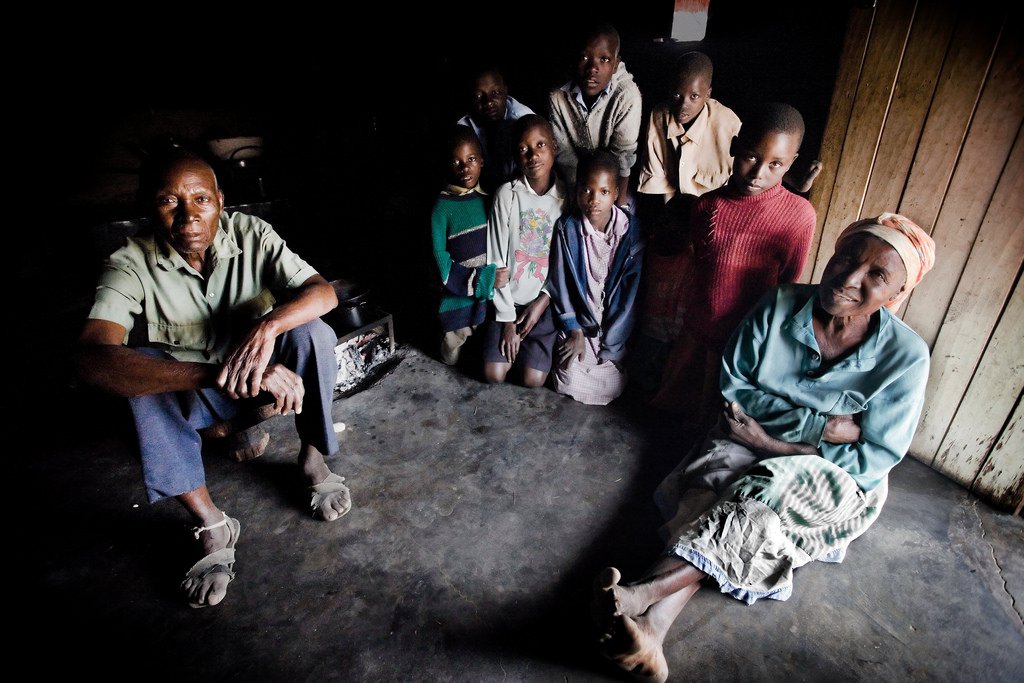 Nicolas, 75, and Rita Kapita, 79, who care for their grandchildren. They explain, “We are in our mid-seventies and we are looking after seven children. Six of our sons and one of our daughters died from AIDS. How can this be?" DFID/Flickr

One million HIV self-testing kits have been distributed in Zimbabwe free of charge since August 2016, the government said.

It is now being widened to include pregnant women, young people, and adolescents, said Mushavi, who is national coordinator for prevention of mother-to-child transmission and pediatric HIV care.

Across the region, 4.8 million DIY kits will be distributed by 2020, funded by global health initiative Unitaid.

Amon Mpofu, monitoring and evaluation director at the National AIDS Council, said Zimbabwe's testing levels have increased with the kits which help to tackle the stigma of HIV, especially for sexual minorities.

"It's very convenient because they can test themselves anytime and access treatment services, and live longer when they have got HIV," said Mpofu.

Read More: In Zimbabwe Without Other Options, Girls Turn to Prostitution and Risk HIV

Talent Jumo, director of Katswe Sistahood, a group working on girls' sexual health in Harare, said self-testing had been well-received by young women, partly due to easy access.

"The idea of having self-testing kits on a shop counter or in a health care center has helped demystify and destigmatise HIV," she said.

There has also been an increase in the number of men who have sex with men accessing HIV self-testing services through peer educator programmes, said Chester Samba, director of GALZ, an association for Zimbabwe's LGBTI community.

Samba said support systems had been put in place for sexual minorities whether their test results are positive or negative.

For young women like 21-year-old barmaid Keyla Mahuni the self-test kits have been a life changer.

"I could have just lived in the dark and fallen sick because I was afraid of visiting public testing centres, but thanks to self-testing, I now know my HIV status and went on treatment earlier," she said.

"It was hard at first to accept my condition, but surely life has to go on."