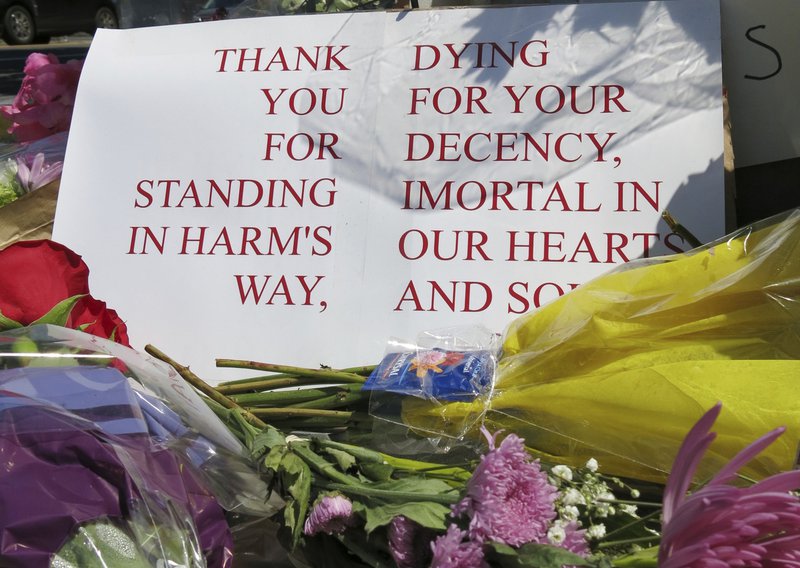 On Friday, as Americans enjoyed the beginning of a long weekend honoring soldiers who sacrificed their lives for their country, two more individuals were killed for defending their fellow citizens.

These men, Taliesin Myrddin Namkai Meche, 23, and Ricky John Best, 53, came to the aid of two young women, one of whom is Muslim, who were being verbally attacked by a far-right extremist on a train in Portland, Oregon

These are the heroes of the Portland stabbing attack. pic.twitter.com/I39kSLiuYS

A third man, Micah David-Cole Fletcher, 21, was seriously injured in the attack, after the extremist, Jeremy Joseph Christian, 35, stabbed all three repeatedly with a knife.

Christian’s rampage began as an unprompted verbal attack against a Muslim woman and her friend, and later devolved into violence against their defenders. Police said that Christian had a history of making racist, xenophobic statements on his Facebook page, where he aligned with Nazi and alt-right views.

Hate crimes against Muslims are rising at an unsettling pace in the US. According to the Council on American Islamic Relations (CAIR) anti-Muslim bias incidents increased from 1,409 in 2015 to 2,213 in 2016, an increase of 57%. This includes mosques being targeted, employment discrimination, school bullying, hate crimes, and other forms of discrimination. A total of 346 of these incidents were directed toward women wearing headscarves, or hijabs.

In the Portland attack, one of the two women confronted by Christian was covered with a hijab.

Read More: This Girl Was Bullied for Wearing Hijab & Her Dad Had the Best Response Ever

After the attack, friends and family who knew the men who stood up for the two targeted women shared their personal stories. These men, different in age and background, were united in their heroism and will be remembered for standing up and taking action when hate reared its ugly head.

Public figures also expressed their condolences to the men whose lives had been lost:

Taliesin Myrddin Namkai Meche - he will always be remembered as A HERO. One of the victims of #Portland stabbing. pic.twitter.com/AB3OQUPaHE

This man lived his life to the fullest. A beautiful soul.

What a tremendous loss for the world. pic.twitter.com/0N5XQPYwzW

Meche was a recent graduate of Portland’s Reed College, where he had studied Economics, but had also taken a class on the Islamic faith called Introduction to Islam. His professor from that course, Kambiz GaneaBassiri, remembers Meche as someone who would stand up for other students when they struggled during a class discussion.

“He's just the kind of person, if he saw somebody being mistreated, he would have spoken up,” GaneaBassiri told Oregon Live.

His family, in a statement, chose to highlight his enthusiasm, which they called “infectious,” and said that he had “lived a joyous and full life.”

One childhood friend remembered Meche as “the kind of guy who made you believe that you can be bigger than yourself.”

Perhaps most tragically, a bystander who helped Meche after he was attacked remembered his last words: “Tell everyone on this train I love them,” he reportedly said, as he was being carted onto a stretcher.

The other fatality of the attack, Ricky John Best, was a father of four (three boys and one girl), an Army veteran, and a city employee.

According to a spokesperson for Portland City Commissioner, Chloe Eudaly, Best was a technician for the city Bureau of Development Services, and was remembered by colleagues for being “the first person you would go to for help.”

His eldest son, Eric Best, said that his father would “make sure that we were loved,” and said he was not surprised by his dad’s act of heroism.

Read More: Muslim Women Created a Human Chain Outside Westminster and It's Beautiful

The only person to survive the attack, Micah David-Cole Fletcher, is a 21-year-old student at Portland State University, who works part time at a pizza shop and also writes slam poetry.

His poetry focuses primarily on social justice. One of these poems, written when Fletcher was in high school, spoke to the discrimination faced by Muslims in the days and weeks after 9/11.

He wrote: “When two towering trees of wrought iron and glass and cement are brought down to their knees / We let it leave an ugly footprint on america that hasn't disappeared in 12 years.”

It’s a message that resonates, unfortunately, more than ever in 2017.