5 Artists Who Have Spread Messages of Peace Around the World

Here’s to the creatives who make the world a better and more beautiful place.

Global Citizen works with talented artists from around the world, who contribute in mass numbers to spread messages of peace and activism throughout the world.

Today, on the International Day of Peace, we reflect on artists who put peace at the forefront of their agenda. Whether it be through music, paint, or even graffiti, here's to the the artists who've taken major steps for humanity toward a more peaceful word.

Let's keep their words in mind today and everyday.

“If someone thinks that love and peace is a cliche that must have been left behind in the Sixties, that's his problem. Love and peace are eternal.”

Since the early 70s, “Imagine” has been the de facto soundtrack to a vision of a peaceful world. It’s one of many songs Lennon wrote for the purpose, including “Strawberry Fields Forever” and  “In My Life.” In 1969, he and Paul McCartney wrote the song “Give Peace a Chance,” a mantra that still echoes around the world today at rallies and protests. His celebrity persona was truly synonymous with world peace and with peaceful protests. In fact, in honor of International Peace Day a massive, pop-art painting will be erected in Central Park in Lennon’s honor.

“I always make sure to write messages that are relevant to the place where I'm painting, that have a universal dimension so anyone around the world can connect to it.”

French-Tunisian artist El Seed has become best known for his optimistic street art. He started off using his distinct Arabic-script graffiti style to reinterpret quotes from the Koran, and now uses quotes from poets and world leaders from all cultures. As El Seed says, in Arabic script, “You don’t need to know the meaning. It touches your soul before it reaches your eyes. There is a beauty that you don’t need to translate.” From South Africa to Rio De Janeiro, El Seed has graffitied messages of inspiration across the world — sublime pieces of artwork that marry artistic aesthetic and humanitarian ideals.

Michael Franti made waves in 2008 with the release of his sixth studio album, All Rebel Rockers, which peaked at No. 37 on the U.S. Billboard 200. Franti’s music is centered around positivity, and his songs are clearly messages of love to humanity and the natural world. They also benefit from the very catchy accompaniment from his ensemble band, Spearhead, which make his music wonderfully easy to dance to. Franti is also an entrepreneur for peace in his own right: he’s the initiator of the “Good To Be Alive Movement,” the founder of his own yoga retreat center, as well as a co-founder of the Do It For The Love Foundation.

“Whenever I see that a peace negotiation is going nowhere, I begin to talk about art and various wisdoms we can derive from familiar and even unfamiliar cultures. For example, we can learn a lot about forgiveness from just looking at and discussing about a painting with such a theme…”

Ibiyinka Alao shares a tender childhood story & valuable lesson with Ss. I will post the entire story on YouTube. pic.twitter.com/Xx6wYGal8q

Nigerian visual artist Ibiyinka Alao's works are vibrant expressions of his deeply unitarian outlook. He has expressed that his use of differing vibrant colors are a parallel representation of the possibility for peaceful integration of different cultures. His work also draws heavily from religious motifs. Alao serves as Nigeria’s Art ambassador to the United Nations, and has been a longtime advocate for the capacity of art to make peace.

“We have the potential to help people out of poverty, out of disease, out of slavery, and out of conflict. Too often, we turn the other way because we think there’s nothing we can do.” 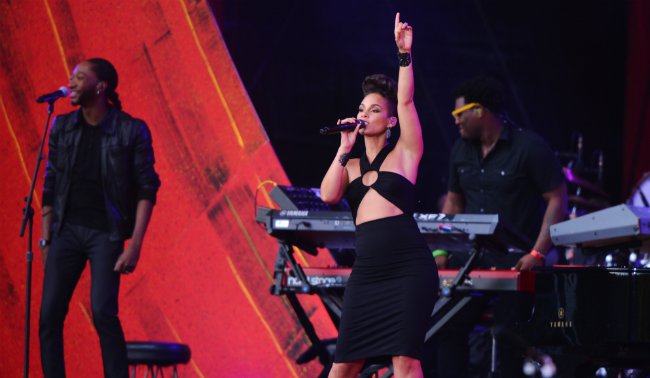 Alicia Keys is a singer with a cause — or rather, many causes, of which peace is at the forefront. She is the founder of We Are Here, an organization that seeks to ‘Reboot the World’ and emphasizing using culture, such as music and the arts, to create change. In recognition of World Aids Day in 2005, her and Bono recorded “Don’t Give Up (Africa)” and has also raised a tremendous amount of awareness for relief efforts, including Hurricane Katrina and in Haiti. Keys is an artist who reminds us of all the factors that are the true building blocks of world peace: health, economic stability, and civil liberties. Let’s also not forget to mention that she absolutely killed it at Global Citizen’s Festival in 2014.