Following campaigning by global citizens, announcements were made by world leaders on key issues.

The Global Citizen Festival is more than music and celebration. It’s also a time for world leaders to step up and make huge commitments to the fight to end poverty in all of its forms.

September 26th marks the fourth annual festival, and it will build upon the successes of the past three years.

To help you envision just how much good this festival does, here’s a progress report on some standout commitments from last year:

World Bank, President Jim Yong Kim committed to allocating $65 billion a year towards the goal of ending extreme poverty by 2030. This significant pledge is on track to be achieved. Jim Yong Kim has been invited back to the Festival this year…

Indian Prime Minister, Narendra Modi committed to put a toilet in every household and school by 2019, timed to coincide with the 150th anniversary of Mahatma Gandhi’s birth. This ambitious but achievable pledge was first announced in August 2014 as part of Prime Minister Modi’s Independence Day speech. According to The Indian Express, 286 thousand toilets have been constructed in schools so far to help girls to stay in school. It is yet to be seen whether the current rate of construction is sufficient to reach the target. Research has shown that behavior change education must be coupled with the construction of toilets in order to increase acceptance of hygiene practises and develop a healthier society. 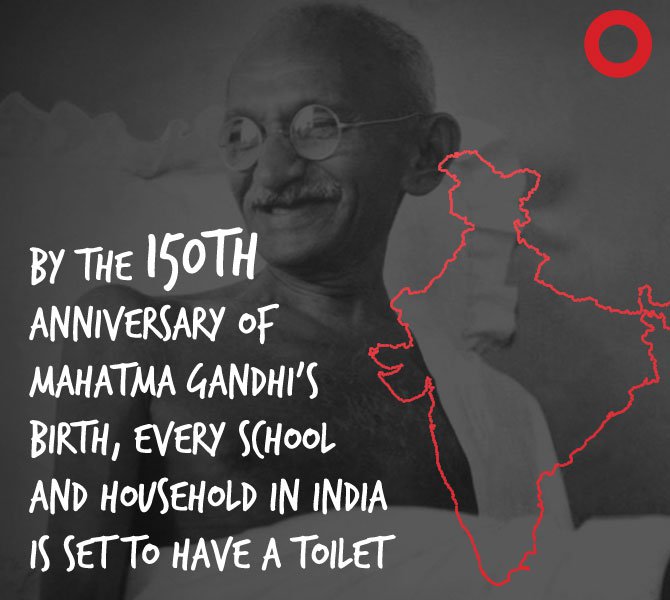 From Nepal, Prime Minister Sushil Koirala pledged to end Nepal’s practice of open defecation by 2017. The devastating earthquake that hit Nepal in April 2015 only briefly halted progress on Nepal’s goal to end open defecation by 2017. Despite 90% of structures being damaged in the worst-hit areas, recent efforts to improve sanitation meant modern toilets survived the quakes in many cases and only required maintenance.

Prime Minister Dr. Roger Kolo of Madagascar pledged to end open defecation by 2018. Persuading a nation’s Prime Minister to talk toilets is no easy feat. However, when $103 million is lost to the economy due to open defecation, high-level political clout is required to tackle the taboo topic. Since pledging to end open defecation by 2018, Madagascar has become a leader and role model in improving sanitation. Madagascar’s President officially declared that sanitation and hygiene is a priority for 2015, and the Ministry of Water resources has become the “Ministry of Water, Sanitation and Hygiene”. The process of ‘triggering’ communities to help themselves has seen significant success to date. 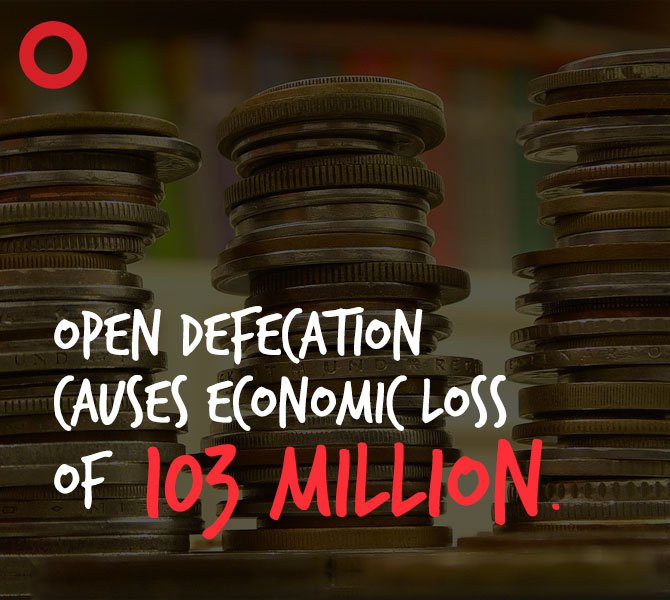 World Bank Group, Senior Director, Water Global Practice, Junaid Ahmad announced $15 billion to support sanitation and behavioral change around toilet use and water supply, set to affect the lives of up to 150 million people. From the stage of Global Citizen 2015 Earth Day held in Washington, DC in April, the following progress announcement was been made:

- $500 million for a sanitation program in partnership with the Government of India;

- $313 million to the Pakistani provinces of Punjab and Sindh, which is set to directly benefit more than 3 million people including millions of women and girls;

- $80 million is set to reach more than 760,000 people in Burkina Faso with water and sanitation;

Sesame Workshop, the nonprofit organization behind Sesame Street, committed to reach 40 million children in Nigeria, India and Bangladesh with water, sanitation and hygiene education messages, WASH for short. Through community and school programs, in-country broadcast of public service announcements and health segments featuring their newest Muppet, Raya, they have reached more kids with WASH messaging than ever before. In addition to this epic success, Sesame has extended its reach to school children in Zambia through a new partnership with World Vision. The extension of the WASH UP! programme shows just how powerful the health intervention with Raya is in crossing borders and scaling-up around the world. 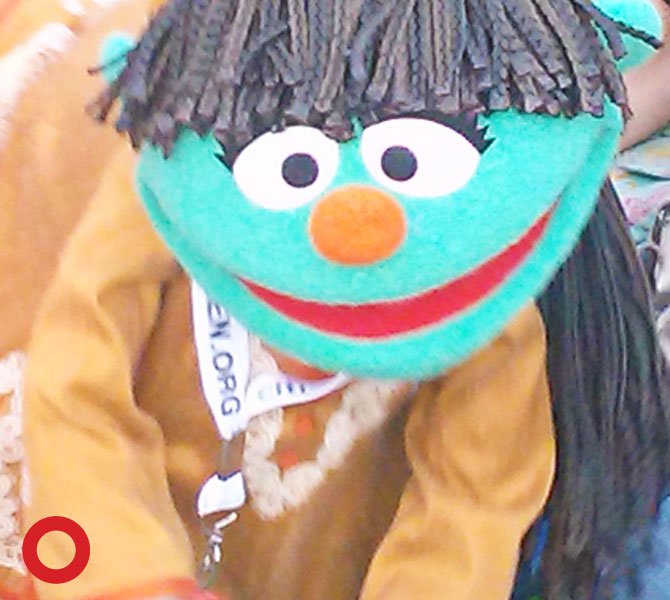 Unilever CEO Paul Polman announced “we are stepping up our efforts on sanitation. We have committed to help over 25 million people gain improved access to a toilet by 2020.”
25 million people is the equivalent of providing sanitation to every person in Sweden, Tajikistan and Serbia! This pledge is being delivered through Unilever’s Sustainable Living Plan via partnership with UNICEF, membership on the Toilet Board Coalition, and programs such as Domestos Toilet Academy. As at April 2015, 1.3 million people have gained improved access to a toilet. This commitment is on track to being achieved by 2020. 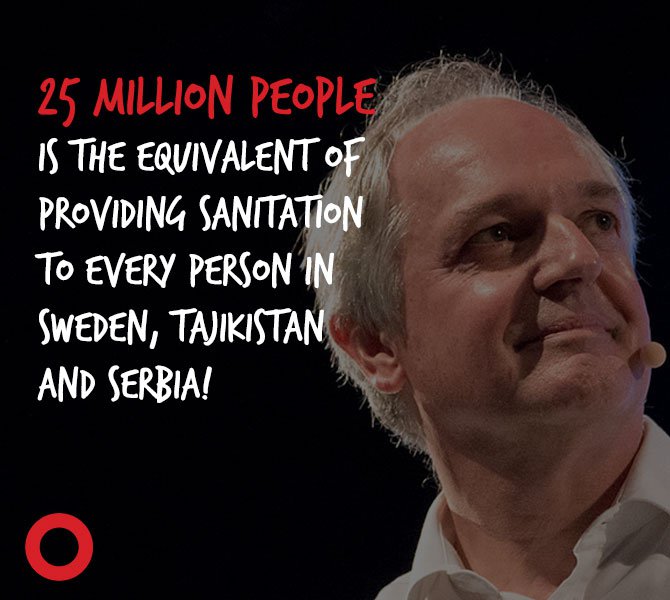 Procter & Gamble’s Martin Riant announced the company’s pledge to reach more than 40,000 school children and teachers in 60 schools in Nigeria and Malawi through a multi-partner commitment. To date emergency access to clean water has been provided through the use of P&G packets to 30 schools in Nigeria. This response is just one small part of their effort to provide permanent WASH projects to ensure clean water, sanitation and hygiene education. The long term project is currently behind schedule due to a change in the implementing partner. The project has been so far restricted to Nigeria, but the commitment remains.

Chairman of the House Foreign Affairs Committee, Ed Royce committed to advance the passage of the Water for the World Act. Chairman Royce delivered on his promise, and alongside 18 months of campaigning that included 53,000 actions by global citizens, the Water for the World Act was passed unanimously in both the House and Senate. Global citizens worked alongside WaterAid America, WASH Advocates, Millennium Water Alliance, InterAction and World Vision on this issue to support access to water and sanitation.

This is a big step toward improving efficiency. It also improves transparency, reporting and tracking of sanitation programs while costing US taxpayers almost nothing in increased spending. Win! Win! Win! 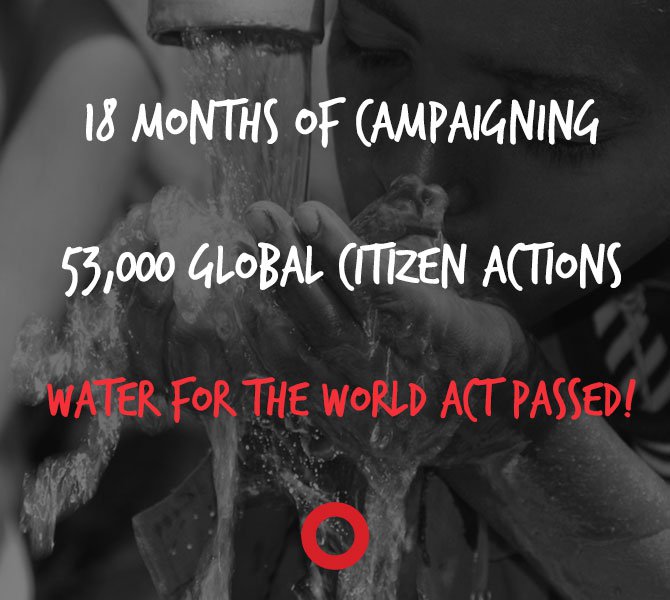 Prime Minister Erna Solberg of Norway announced an increased commitment to Gavi, the vaccine alliance of over $1 billion over the next 5 years. Alongside this commitment was a call for more support: “provided other countries and donors also significantly increase their support for Gavi.” This call was heard, and other countries also increased funding for valuable immunizations to reach those that need them most. For Norway, this mammoth commitment amounts to 6.2 billion Norwegian Krone, approximately equivalent to $188 per citizen.

Luxembourg Prime Minister Xavier Bettel announced an additional investment of €500,000 to the Global Fund to Fight HIV/AIDS, Tuberculosis and Malaria, as well as reaffirming his nation’s commitment to it’s official development assistance (ODA) level: 1% of the gross national income (GNI) of the country. That might sound meager, but it’s a higher percentage than almost every country in the world.

The ODA goal that developed countries committed themselves to in the 1970s was 0.7% of GNI. But Luxembourg is one of the few countries in the world that have met and exceeded the target. True to the country’s reputation, the promised €500,000 has been delivered to the Global Fund, and is set to affect 20,000 lives through its programs.

Nobel Peace Prize Laureate and education campaigner, Malala Yousafzai called on Canada to reverse its shrinking support for education and, in particular, for the Global Partnership for Education (GPE), noting the dramatic decrease in aid from 12% to 7.66% between 2009 and 2012. Following the message from Malala and campaigning by global citizens including the coalition of Canadian Civil Society Organisations (CSOs), Canada came through with a commitment of CA $120 million over 3 years with an additional CA $10 million pledged to UNICEF to support education and child protection in fragile and conflict states. This is set to positively impact 800,000 school age children by 2018. Go Malala! 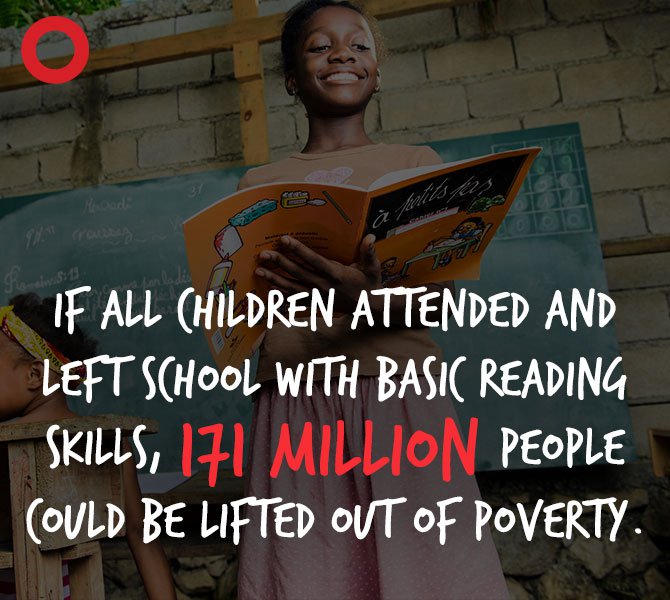 Prime Minister of Denmark, Helle Thorning-Schmidt committed an additional $9 million to the Global Partnership for Education (GPE) in 2014, equivalent to 50 million Danish Krone. Having delivered on this promise, almost 70,000 children are set to receive a better education. This came on top of an increase of Denmark’s annual contribution from $50 to $70 million towards GPE. A++ to Denmark!

Denmark’s Trade and Development Minister, Mogens Jensen, made further commitments on behalf of his country at the 2014 Global Citizen Festival. $11 million was committed, and has been delivered to UNICEF Pakistan for education for children in the tribal areas of northwest Pakistan, the area where Malala Yousefzai grew up. This part of the country is a particularly high-needs region for girls education, and has been a central focus of the UNICEF education program.

A further $15 million was commited to the Amplify Change Fund that launched at the end of 2014. This amount has been partially delivered to date, and the Fund has been progressing successfully. The Amplify Change Fund works to fight for the rights of women and girls. The newly established unit has identified its first recipient organisation and planning is underway. Watch this space!

All in all, we can expect that more than 150 million lives have been reached through these efforts after one year.

That’s an impressive achievement. And it’s thanks in large part to the hard work of global citizens like you who stay informed and engaged and urge world leaders to take the boldest actions imaginable to end poverty!

Here’s to the 2015 Global Citizen Festival and even more world-changing commitments!

This piece was researched and written by Sarah Wood and Sophie Goulter, 2015 Festival Impact Team for the Global Poverty Project.