Showing up for trans people. 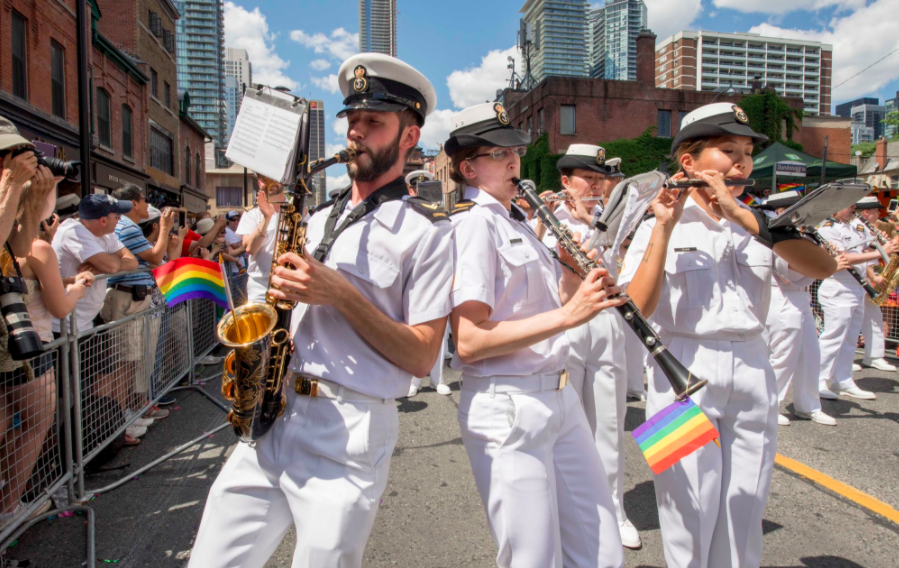 On the one hand, Wednesday was a pretty bad day for LGBT rights in America — President Donald Trump announced a new ban on trans military members and his Department of Justice said it was legal to discriminate against LGBT folks.

On the other hand, the reactions to the Trump administration’s decisions were swift, loud, and colorful — a sign of hope for those caught in the middle of a human rights struggle.

In a series of tweets, Trump said the US military could not “be burdened” with trans service members, seemingly reversing the policy announced by then-Defense Secretary Ash Carter a year ago, under President Barack Obama, that the military would allow openly trans members to serve.

The crowds gathered at protests around the country Wednesday night carried signs reading “Resist” and shouted phrases like “Stand Up” and “Fight Back,” according to ABC News. In LA, some attendees carried signs that read “Proud Trans Vet.”

LIVE: Protesters gather in Times Square to rally against the ban on transgender people in the military. https://t.co/3AM6xwvDsypic.twitter.com/ZIRs6zbuBX

"There are people who are retiring in the military, there are people who've done 18, 19 years and are about to retire and now it's all taken away from them," five-year military veteran Rudy Akbarian, 27, told The Associated Press. "It's not fair."

Transgender vets speak at @LALGBTCenter after @realDonaldTrump tweets they should be banned from the military. pic.twitter.com/ySIJsy02kU

.@ACLU_SoCal says if @realDonaldTrump turns his tweets about transgender people into actual policy, they'll sue to stop it. pic.twitter.com/mQHzoLHcfC

Read More: Stephen Colbert Has Feelings For Donald Trump About the Transgender Ban

The ACLU of Southern California said it would sue the Trump administration if the ban is implemented.

Sen. Tammy Duckworth, an out lesbian and an Iraq War veteran who lost both her legs in combat, told Anderson Cooper Wednesday night that gender identity did not matter to her when she was profusely bleeding and in need of help.

“When I was bleeding to death in my helicopter after that RPG ripped through the cockpit of the aircraft, and an American came to save my life, it didn’t matter to me if they were gay, if they were straight, if they were transgendered, it only mattered that they wore the uniform of the United States military, and I will always remember that,” she said.

And a transgender former Navy SEAL also spoke out against the ban from her own experience.

“Let's meet face to face and you tell me I'm not worthy,” Kristin Beck, a retired SEAL Team 6 member who has fought in Iraq and Afghanistan, told Business Insider.

Read More: 9 Battles the LGBT Community in the US Is Still Fighting, Even in 2017

Beck was awarded the Bronze Star, the Purple Heart and the Meritorious Service Medal during her time in the service, when she kept her gender identity a secret, according to a 2015 profile in GQ.

Some critics used comedy to get their points across. Late night television host James Corden mocked Trump’s policy in a song on Wednesday, wearing a top hat and tails and reworking Nat King Cole’s song “L-O-V-E” into “L-G-B-T.”

And here's where the Canadian Armed Forces stands:

We welcome Cdns of all sexual orientations and gender identities. Join us! #DiversityIsOurStrength#ForcesJobshttps://t.co/572KahN2Zhpic.twitter.com/9In7HR4Utj

And British military officials spoke out in unison in support of trans service members.

"As a Royal Navy LGBT champion and senior warfighter I am so glad we are not going this way,”  UK Maritime Forces Rear Admiral Alex Burton tweeted.

Second Sea Lord Vice Admiral Jonathan Woodcock tweeted: "So proud of our transgender personnel. They bring diversity to our Royal Navy and I will always support their desire to serve their country.

So proud of our Transgender personnel. They bring #Diversity to our @RoyalNavy and I will always support their desire to serve their country https://t.co/PSLAEy6laR

"Only if individuals are free to be themselves can we release the genie of their potential,” Lieutenant General Patrick Sanders said in February.

“We are clear that all LGBT members of our armed forces play a vital role in keeping our nation safe. We will continue to welcome people from a diverse range of backgrounds, including transgender personnel,” the UK’s Ministry of Defence said in a statement to BBC Wednesd