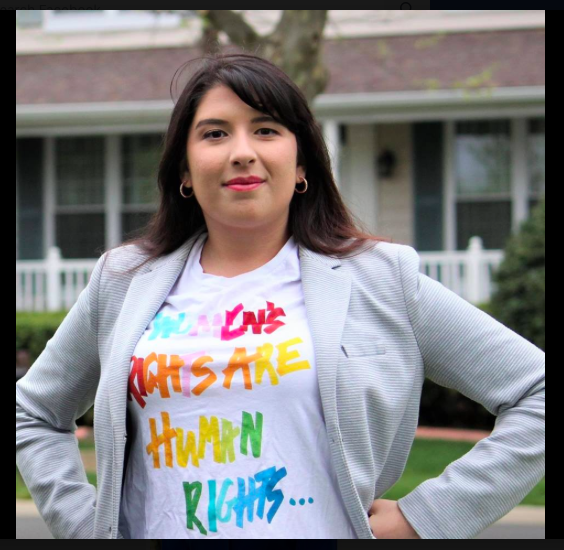 Around the world, fewer than one-quarter of lawmakers are women — an imbalance in representation that affects how laws are crafted and passed and how equality is created in societies. Global Citizen’s series, “Who Run The Gov? Girls!”  chronicles the massive uptick in women running for office, regardless of political party, in the US and around the world, highlighting the candidates and the groups helping them to run, the challenges they face, advice & tips for running, and the results.

Hannah Risheq stood right on the stage at the Jacobs Javits Center on election night 2016, waiting for what she hoped would be a Hillary Clinton victory speech at the end of the night. The crowd thinned around her as the night grew later and more states turned red.

The 25 year-old left devastated, but a flame ignited in her that night, she told Global Citizen this week. Risheq vowed to protect the diversity of her state. To do so, she decided to run for Congress.

“I’ve got to do something now,” Risheq said she thought to herself following the 2016 election. “The communities I’ve been fighting for my entire life are at the biggest risk right now.”

Take Action: Call on world leaders to support the global action plan to get every girl in school and learning

Risheq is a first-generation American who identifies as both Muslim and Jewish. Her Muslim father immigrated from Palestine to the US, where he met and married Risheq’s mother, a Jewish-American woman. Growing up with two religions and two cultures, Risheq witnessed first hand what it meant to work together toward common interests and common goals.

Risheq and her family experienced first-hand discrimination and hate crimes following the 9/11 attacks. Customers stopped coming to her parents’ restaurant in North Carolina, forcing her family to close the store and move to Virginia.

“My family was really connected to what was going around us, and it was a part of our dinner conversations,” said Risheq.

Her high level of engagement with the world around her continued into her school years and her career as a health consultant for a consulting firm in Virginia. She organized protests after the 2016 election, knowing in the back of her mind she would someday run for office.

Where do the Democratic Candidates for #VA67 stand on the issues? https://t.co/l3gJkDtB27pic.twitter.com/P4kXWl1Esd

That opportunity came this spring. In the Democratic primary for the 67th District of Virginia, Risheq felt that none of the candidates represented her voice or her community’s voice. Only 4% of the legislators in Virginia are under the age of 35, and only 19% are women. Risheq knew that she would be the youngest of them if she were elected at 25 years old.

“If you’re not at the table nobody is going to say your point of view,” Risheq said.

Read More: This Organization Won 70% of Its Political Races in 2016, and It Only Runs Women

Risheq announced her campaign in the last week of March, a short time before the primary elections in June. She was a long-shot candidate against her opponent, Karrie Delaney, 38, who started her campaign in 2016. She and her team of volunteers took the month of April to organize the logistics of the campaign, and by May they had the ball rolling.

Although this was Risheq’s first time running for public office, she was no stranger to political campaigns. She previously volunteered on Hillary Clinton’s presidential campaign as well as President Obama’s 2008 and 2012 campaigns.

From her experience knocking on doors for Obama’s campaigns, Risheq felt that voters would see the best version of her by visiting them door to door — she also thought she sounded young talking over the phone. Meeting people face-to-face proved the most fruitful of all her campaign techniques and comprised a large portion of the 13,000 people reached by the campaign.

“A lot of people were interested in a young person running for office,” Risheq said.

But running for office as a young person came with many obstacles. Some people didn’t take her campaign seriously, questioning whether she had enough experience to work for public office. But Risheq felt that her background and experiences as a first generation Jewish-Muslim American and young person made her a qualified candidate.

What are you doing on June 4th? Support Hannah at the #VA67 Candidate Forum! https://t.co/1DkjGqSQiDpic.twitter.com/0CtpdZ5tBV

As she campaigned, Risheq traveled each week to New York, four hours away, to finish her second masters, a degree in social work from Columbia University.

“You have to work much harder than someone just a few years older than you,” Risheq said. “I didn’t carry my resume on my face.”

Read More: What It’s Like to Be a Queer Woman Running for Office

Although Delaney ultimately won the Democratic nomination (she will go head-to-head against Republican incumbent James LeMunyon in November), Risheq reached out to 13,000 people in her district and collected 23% of the votes.

Risheq was not the only woman or young person inspired to run after the 2016 presidential election. Since Donald Trump was elected president back in November, EMILY’s List, a political actioncommitteeforfemale candidates, said it’s heard from over 11,000 women from all 50 states interested in running for public office.

Run For Something, another organization that supports and trains people to run for public office, focusing on millennials instead of women, has also seen a rise in young people eager to run for office. And its co-founder, Amanda Litman, sees Risheq as a leader for the next generation, and assisted Risheq in her campaign.

Although she has no plans currently to run again, Risheq is not ruling it out.If she were to run again, she said she would do so with more time and would be the first to announce her campaign.

Until then, she offers this advice to women and young people considering running for office: have your finances in order, and stay positive.

“Continue to be positive because there are going to be a lot of people who doubt you,” Risheq said. “Even if you lose, you will learn a lot about yourself and about your community.”