Saying no to violence and yes to peace is how Hanan makes her mark on the world. 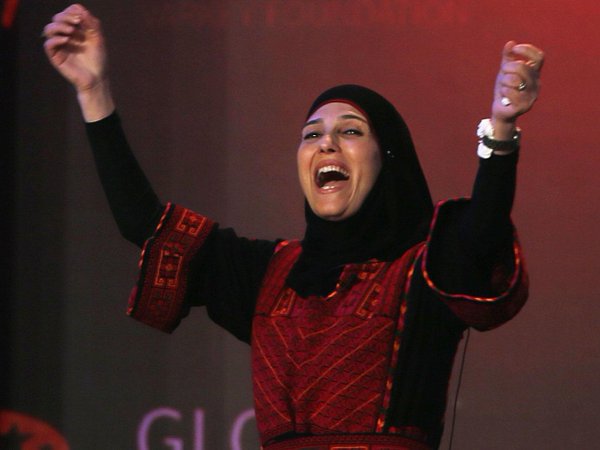 Palestinian teacher, Hanan Al Hroub won the Global Teacher Prize because of her remarkable dedication to peace and education! Her exciting win was announced March 13th at the Global Education and Skills Forum in Dubai.

Upon accepting this prestigious award, she shared a few words about education and said, "I am proud to be a Palestinian female teacher standing on this stage. I accept this as a win for all teachers in general and Palestinian teachers in particular. Each day, the role of the teacher is reinforced and its importance is confirmed as the world questions what future we want for our children."

The Varkey Foundation annually awards one teacher a $1 million dollar prize to recognize the power of educators around the world and to encourage learning enviornments that foster growth and empowerment. Hanan's wants to give back and spend her winnings on her students so they can excel in their academics and maybe one day become teachers.

“Yes, we can help our children investigate this world and understand it, which helps them to be integrated within it. We can teach children to be effective and inventive through various contexts which include entertainment, drawing and movement. We need to help children with questioning, dialogue, thinking and feeling to help them express themselves" she said.

Learn more about Hanan and her incredible journey below.

The below article was originally published February 26, 2016.

Hanan Al Hroub, a primary education teacher, grew up in a Palestinian refugee camp in Bethlehem, where daily acts of violence were a harsh reality.

She decided to become a primary school teacher after realizing that when children witness violent events they become incredibly traumatized and tend to need extra care in educational settings.

The realization came from a traumatizing event that impacted her own children. On the way home from school one day, Her children witnessed a shooting incident that left their father injured. For obvious reasons this was deeply upsetting for the children. Hanan saw first hand, her children’s behaviors, personalities and academics were transformed because of this one event.

After Hanan attended countless meetings and consultations to discuss her children’s behavior and academic performance, she discovered she could help other children who experience similar traumatic experiences.

Because of the constant violence in the region, classrooms in the area are more likely to be tense and sometimes even discouraging environments. A lot of children display poor academic behavior and even resort to violence against one another.

Hanan is changing this dynamic. By embracing the simple concept of saying no to violence and empowering the children to learn through playing, she is transforming the lives of her students.

Literacy is at the core of her teaching but she also explores less textbook focused topics like trust, respect, honesty, and positive relationships.

She encourages her students to work together and pay close attention to individual needs. And if they do these things and practice good behavior, they get rewards! Because, who doesn’t love a reward?

Her simple, yet sincere approach has led to a decline in violent behaviour in her classrooms which has inspired her colleagues to evaluate their own teaching methods!

If you can make a connection between kids and flowersYou plant love in there hearts #TeachersMatter@TeacherPrizepic.twitter.com/MlrMTISFhX

Because of her amazing teaching style and dedication to peace, Hanan was nominated for the The Global Teacher Prize and has been named one of the top 10 finalists!

The Global Teacher Prize is a $1 million USD annual award presented to an exceptional teacher who has made an outstanding contribution to education. Awarded by the UK-based Varkey Foundation, an organization striving to celebrate educators around the world, each nominee is acknowledged for their impact on students and the larger community. Nominees include public officials, head teachers, academics, journalists, entrepreneurs, company directors, scientists and entertainment industry figures from around the globe. The winners will be announced on March 13th, 2016 at the Global Education and Skills Forum in Dubai.

To learn more about the award visit The Global Teacher Prize.

Hanan Al Hroub is an incredible example to what it means to dedicate every day towards making the world a better place.

“We just want peace; we want our children to enjoy their childhoods in peace,” She said to the Varkey Foundation.

Global citizens everywhere can follow Hanan in her incredibly brave and humble journey towards improving education for all. Taking action to make sure so that everyone has the opportunity to get the best education possible. Education opens doors to possibility and positive outcomes, even in conflict areas.

Hanan is proving that with education comes a journey of growth in tomorrow’s leaders.

Hear what she has to say about her own journey: