28 Girls Killed in Orphanage Fire in Guatemala After Protests Over Abuse, Overcrowding

They had reason to protest. 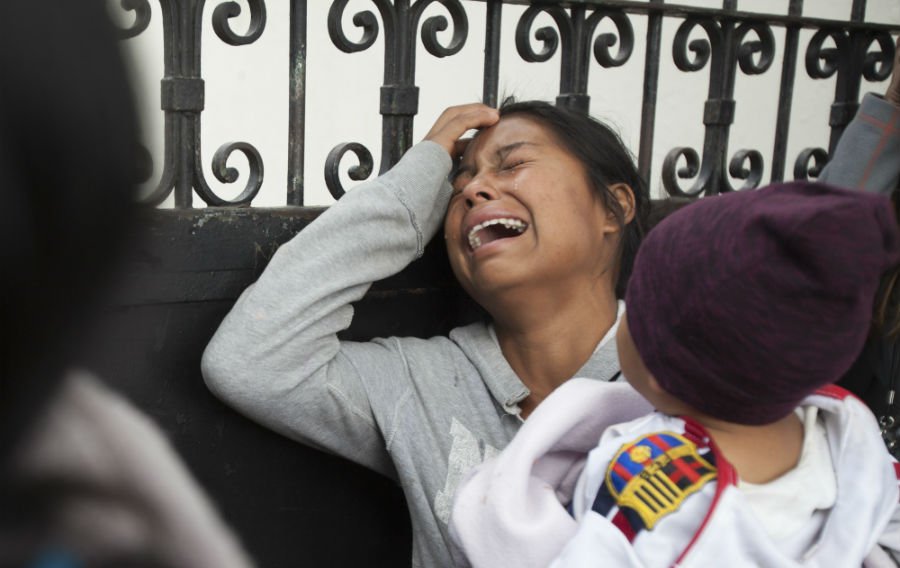 A relative of a youth who resided at the Virgin of the Assumption Safe Home wails as she waits for the release of the names of those who died in a fire at the shelter, outside the morgue where the bodies are being identified. AP Photo/Moises Castillo

A deadly fire that killed 28 girls at an orphanage in Guatemala on Wednesday was started after resident children set mattresses on fire and launched a riot as a way of protesting the shelter’s poor conditions.

The unrest at the Virgin of Assumption Safe Home, 15 miles outside Guatemala City, began Tuesday night when the orphanage’s residents launched a riot and a mass escape through the gates. Most of them were caught, brought back to the home, and locked in their rooms, according to the Los Angeles Times.

Early Wednesday, mattresses in the girls’ dorms were set on fire, and the blaze quickly engulfed two dorms, killing 28 and injuring at least 40 more kids between the ages of 13 and 17.

The government-run children’s shelter was meant to be a safe shelter for vulnerable and abused teens in the semi-rural, San José Pinula. However, complaints of abuse and severe overcrowding at the Virgin of the Assumption Safe Home were enough for those who sought shelter to protest.

Concerns at the home had already led to the dismissal of the previous director, and the home was supposed to remove minors with criminal records in order to protect vulnerable residents, but didn’t.

Some children at the home were placed there as victims of domestic violence, or trafficking, with no other housing options. Others were checked in by parents for substance abuse or behavioral issues.

Alicia López, the mother of a 12-year-old autistic boy, said he claimed he was raped the children’s home when he sought treatment for drug addiction, reports to the Guardian.

A 15-year-old boy had complained to his mother, Andrea Palomo, that older gang members forced tattoos on younger children according to Reuters.

Guatemala has one of the highest rates of child malnutrition in Central America, and children also complained of poor food quality at the shelter.

"According to what they say, the bigger kids have control and they attack them constantly," Jorge de Leon, a human rights prosecutor wrote in a statement. "They also complain that food is scarce and of poor quality."

As minors with few other options, many of the children were not allowed to leave the shelter. The riots they staged Tuesday night, resulting in the fire the following morning, were an attempt to escape or request transfers out of the shelter. According to de Leon, 102 children escaped and have been located.

The home is supposed to hold no more than 500 children, but according to Carlos Rodas, head of Guatemala’s social welfare agency, the shelter was housing around 800 youth under 18 at the time of the fire.

Other state officials, such as Attorney General Annabella Morfin, argue that violent minors should not be living in the same shelter as children who need protective services, citing this as a cause for both abuse and overcrowding.

“What happened is extremely serious, and even more so for the fact that it could have been avoided," said Morfin.

Although resources are scare, providing safe shelter, food, and a respite from abuse must come first for youth services.

Guatemala is undoubtedly not an easy place to grow up. It is one of the poorest countries in Latin America, where nearly 60% of the rural population lives below the national poverty line.

In cities, poverty, trafficking, and weak law enforcement and judicial systems contribute to one of the highest crime rates in Central America. According to the United States Department of Diplomatic Security, Guatemala is number 25 in a list of most dangerous places to live, and widespread poverty lies at the root of the country’s violence.

Addressing poverty in the country is a long and on-going battle, however, it is ultimately the only way to create a better future and prevent such horrific events as the Virgin of the Assumption Safe Home fire from occurring.

While an investigation continues to seek justice for the victims of the fire, a wake-up call to provide better care for children rings loud.