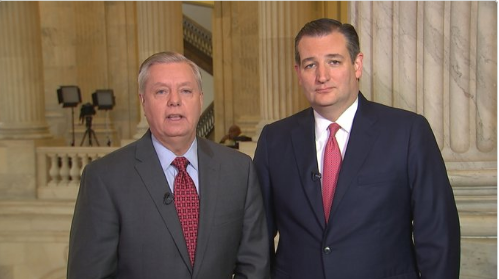 Republican legislators in the US Senate proposed defunding the United Nations as retribution for a UN Security Council vote last month over Israel’s settlements in the West Bank.

The bill, proposed by Sen. Ted Cruz and Sen. Lindsey Graham, could have a devastating impact on the UN’s work around the world. The US contributes over 22% of the UN’s overall budget for issues including health, education, vaccinations, and emergency refugee relief.

The amount of money represents 0.1% of the U.S. federal budget.

Cruz and Graham introduced the legislation that would “prohibit voluntary or assessed contributions to the United Nations until the President certifies to Congress that the United Nations Security Council Resolution 2334 has been repealed.”

Read More: In Final UN Address, Obama Urges World Leaders to ‘Go Forward and Not Back’

In other words, the US won’t give the UN any more money until it reverses course on the Israeli settlement resolution.

The UN resolution criticized Israel’s accelerated development of the West Bank area as being a “major obstacle” to peace between Israelis and Palestinians, calling it an international crime, according to the New York Times. It was passed 14 to zero, with the US abstaining from the vote.

In explaining the abstention, UN Ambassador Samantha Power said the US has long objected to Israel’s West Bank settlements and said that the accelerated pace of building there was prohibiting a two-state solution to Israeli-Palestinian peace, which the US has championed.

Ardent Israel supporters had campaigned hard to have the US veto the resolution when it was up for vote in late December and criticized the abstention. Israeli Prime Minister Benjamin Netanyahu was furious about the vote, calling it “shameful” and ordering Israel’s ambassadors to New Zealand and Senegal to return home.

Congressional leaders from both parties and President-Elect Donald Trump also criticized the US for allowing the resolution to pass.

"Putin is a KGB thug": Ted Cruz said the Russian leader committed an act of war by invading Ukraine https://t.co/NjXGpxg3E0 via @Morning_Joepic.twitter.com/khZItsSsAQ

After introducing the bill on Thursday in the US Senate, Cruz said it was Congress’s duty to hold the UN accountable and to “use our leverage as its largest contributor to push for the repeal of this resolution, making it clear to the world that Congress stands unequivocally against efforts to undermine Israel.”

The UN Foundation and its Better World Campaign, which is campaigning against the move by Cruz and Lindsay said this in a statement:

“Although imperfect, no other organization has the reach and impact of the UN. Each year, the UN provides food to 80 million people in 80 countries, assists over 60 million refugees and other people fleeing conflict, vaccinates 40 percent of the world’s children, and keeps peace through 120,000 peacekeepers – the world’s largest deployed military force.”