Find out what you can do to eliminate inequality and why goal 10 is a big priority! 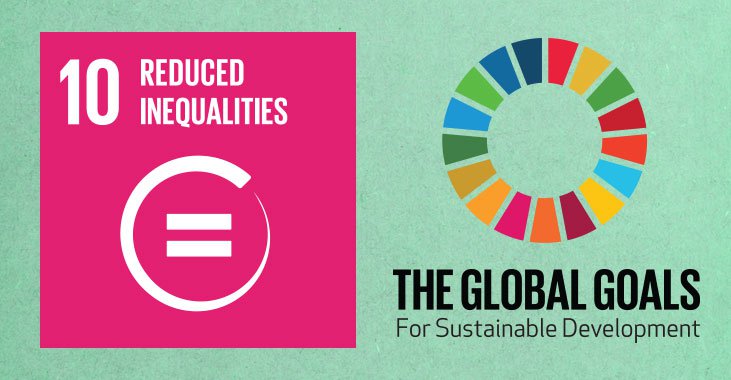 Global Goal 10 has been a center point for human development for hundreds of years. People like Mahatma Gandhi, Martin Luther King Jr., Sojourner Truth and millions of others dedicated their lives to fighting for equal rights. These historical figures live on and are remembered today because they made an impact in reducing inequalities around the world.

Today, girls like Malala Yousafzai are fighting for the same cause, which is the essence of Global Goal 10—reducing inequalities.

So what does this mean? It means standing up for equal human rights for people of all races, genders, and socioeconomic status. And it means not discriminating between classes of people no matter who they are or where they come from.

There’s so much you can do!

“You have brains in your head. You have feet in your shoes. You can steer yourself any direction you choose.”

You can raise awareness to educate girls and women to reduce gender inequality. Encourage girls to enter the STEM fields as well!

You can help all children access education and stay in school because education is shown to reduce violence and war.

You can ask government and world leaders to stop civil wars, and genocide and promote peace so certain racial or religious groups never see each other as enemies.

You can conserve resources (Goal 13) so that equal access to land and clean water and sanitation exists for all. By doing your part to save precious resources, less fights based on exploitation of resources will occur.

You can invest in finance and technology for developing countries so that income inequality is reduced. Investing in education and technology can create strong economies as countries develop. Then these countries will have fewer disadvantages when trading in the global market.

You can support affirmative action to end unequal access to education and jobs.

You can push for equal pay for substantially similar jobs.

And you can promote the Global Goals so everyone can do their part to reduce inequalities.

Can it be done? Is Global Goal 10 plausible?

This goal is SO achievable in the next fifteen years. Goal 10 isn’t asking to END inequality, although I think everyone should aim for that. It’s asking world leaders, and global citizens everywhere just to take measures to reduce inequalities.

Yes, this sounds like a big task considering1.5 billion people still live below the $1.25 a day poverty line globally―mostly in developing countries.

It seems as though inequalities permeate societies everywhere you look. Income, gender, resources, education, access to jobs—is anything equal? Consider looking on the bright side, though. Because inequality is spread through society in many forms, action can be taken to reduce inequality in just as many ways!

And look at how far the world has come.

Women can vote in all but 3 countries.

Access to education has increased in the past decade. The gap between literacy rates for men and women has narrowed, and the literacy rate for adult youth (age 15-24) is 91 percent.

Who are the leaders?

Let’s break it down by inequality factor.

The leader on income inequality is Sweden. Sweden is the most equal country in terms of income inequality based on the Gini Index, which measures to what extent the income and consumption (what you make and what you buy) between citizens varies, starting from “perfectly equal” which would be zero. Sweden has the lowest score, coming in at 23.

While most of the top scoring countries for equality are in Europe, Kazakhstan should get a shout-out for being number 9 in the world for equality.

What country is the most equal for women? Iceland! The Nordic land of volcanos and hot springs has closed the gap on education for women. Women have equal access to healthcare and education throughout the country.

What tactics will be used to accomplish this goal?

Creating laws to provide equal pay for the same job so there is no discrimination between how much employees are paid whether they are a woman, man, or based on race and nationality.

Giving everyone equal to healthcare and employment benefits will foster a more equal world.

Sharing technology! Humans create incredible inventions every day. But, strict patent laws cause this information and technology to primarily remain in wealthier countries instead of traveling to poor economies where it would do the most good.

Stop creating vaccines based on what will be lucrative, or the media convinces people they need. Invest in research and development for vaccines for every disease, especially diseases that affect disadvantaged citizens with low incomes or in poor countries.

Lastly, and most importantly, EDUCATION. Education is the best tool for reducing inequalities. Education raises incomes, decreases gender inequality, boosts the economy, makes farming more efficient, and reduces poverty overall according to the Global Partnership for Education.  Higher rates of attendance in school along with teaching tolerance reduces war.

Why is Global Goal 10 SO important?

Goal 10 is incredibly essential to creating world without extreme poverty. The reason people are trapped in cycles of poverty is because of extreme inequalities that persist in society today. By taking action to reduce these inequalities we can create a world where people have equal access to all the benefits of life.

Go to TAKE ACTION NOW and Tweet at the President of Brazil to step up for girls and women to help reduce all types of inequality.