By Hans Glick  and  Katherine Curtiss

"Bottom line is political leaders respond to what they think is right." 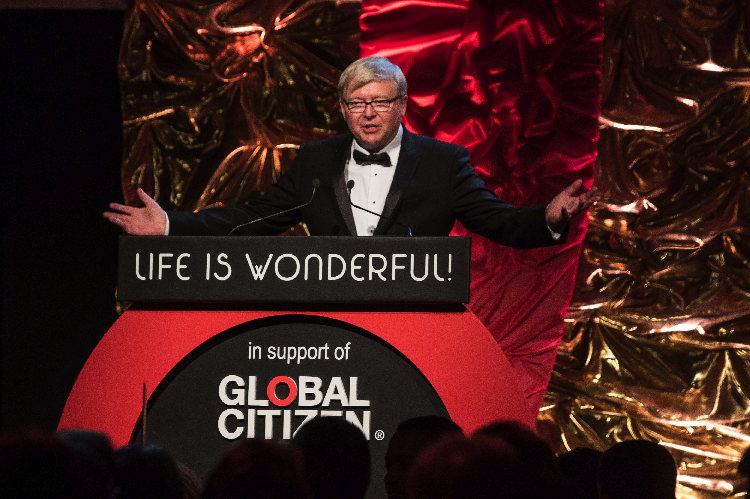 By Hans Glick  and  Katherine Curtiss

Kevin Rudd is an international powerhouse. The former Australian Prime Minister has focused on bettering the world throughout his career. These days, he is the President of the Asia Society Policy Institute, a think/do tank based in New York City. He is also the Chair of UNICEF’s global partnership Sanitation and Water for All, and Chair of the Independent Commission on Multilateralism, where he is leading a review of the UN system.

The Mandarin speaking global leader sat down to discuss his views on activism, water, and how the world fits together. You can see the highlights in this video:

The full Q&A is below.

A former political leader, why do you think social movements, like the one here at Global Citizen, are so important?

Political leaders respond to two core drivers. What they think is right and political pressures within their own countries.

So when you are looking at mass movements among young people including Global Citizen, if executed well on the ground, it certainly causes political leaders to sit up and pay attention. Having of course the additional opportunity to bring to their attention what actually needs to be done to rekindle the moral flame, which took most of them into office.

Reminding them of the key mission, for example in poverty elimination, but secondly in saying we’re here as an informed group of people and we want you, our national political leader, to make a difference.

You are known for your expertise in the Asia-Pacific region. What are your thoughts on engaging Asia as a whole in the movement to end extreme poverty?

I think one of the great Western misconceptions of what we call Asia is to assume a homogeneity at all. Remember the term ‘Asia’ is a term of Western convenience. What does Asia mean? It means ‘East’ and east of where? Well, east of the West, and so the West gives all those countries over there in the East that name. So it is actually a Western conceptual framework.

For any global movement, [you need to look] at effective engagement with what the West calls ‘Asia.’ Frankly, forget the term and get into the reality of what each of these civilization’s traditions is about and what its modern politics and economics are. That, I think, is the critical first step.

As Chair of the water and sanitation movement, what do you see as some of the key challenges around the issue of sanitation?

Finance. I think people have thought through the question of sanitation and water pretty well on the technical side [and] the policy side. Not so well on the finance side.

If you look at clean drinking water on the one hand and sanitation on the other, there is a whole raft of technical solutions to these problems in parts of the world which have lots of water and in parts which have none, or very little.  Then there are policies constructed around how you deliver it, and make the change happen on the ground. [Each] would be different per village, per community, per country, per region.

But the missing element that I see is finance, so I think the core challenge for WASH projects around the world, certainly for the ministers of water and sanitation that I’ve met in my capacity as Chairman of Sanitation and Water for All is, ‘How do they raise the finance?’

Turning now to your home country, how important do you see Australia’s role on the world stage?

Australia is a G20 country. It's the 12th largest economy in the world, one of the oldest continuing democracies in the world, and it’s a country which by instinct has a generous heart. Although sometimes its politics let it down, I think as a middle power in the world, it has the capacity—with the other middle powers—to shape the relations on some of the big challenges that we face.

So it is not just within our region, in the Southwest Pacific and Southeast Asia, not just in wider east Asia, but through the United Nations framework—how do we act together with other creative middle powers to sustain the efficacy of the UN-based multilateral system to the future?  Because it is not naturally self-regenerating, you need a bunch of states to make that happen. The thing about Australia, Canada, Korea, Indonesia [and similar] countries around the world is that they have enough diplomatic capacity to make a difference. If they act together and actually represent a large slice of diplomatic action—if they combine, shall I say, public good, it’s not just a solution to x, y, z.

Bottom line is people like Australia. Australia doesn’t threaten anybody, and as a result there is much that we can give, ‘cause people don’t think that we have a bunch of ulterior motives. In our heart of hearts, most Australians prefer to be at the beach.

Who are some notable Australians who are acting out the values of what it means to be a global citizen?

Well, I think, a young fellow near and dear to this team is pretty important, Mr. Hugh Evans. I have known Hugh for a long time, since he was a junior woodchuck in Australia running his first micro-NGO; and a decade or so later he is doing some significant [work] globally.

In international politics, types of people like Gareth Evans—former Foreign Minister of Australia, recent head of the International Crisis Group  and a formidable intellect when it comes to global problem solving. In this order of movie star appeal: Hugh Jackman, Evans—that's Hugh—and then Gareth Evans, former Foreign Minister. That's a few examples.

Australia recently announced cuts to its foreign aid budget. Why is it so important that those cuts be reversed?

It’s pretty basic. The current Australian government will have its reasons; let me tell you why I chose to increase foreign aid, and increase it significantly when I was Prime Minister and Foreign Minister.

The global challenge is getting bigger, not smaller, and global finances are getting smaller not bigger. If countries like Australia believe they can just sort of walk to one side, it just ain’t going to happen. The challenge for budgeting [and] planning all around the world is to ensure that we have measureable aid programs with measureable results to demonstrate to the Australian people and any of the other people what the results are. You do that and Australians are basically pretty reasonable people; they see the results then they’ll say, ‘Yup, that makes sense,’ but if they think it’s like pouring money into a bottomless pit then they’ll react.

What does global citizenship mean to you?

I kind of think in those terms myself. When people are at an international conference somewhere and people are asking my particular views on Australia, I usually have to scratch my head because I haven’t lived there for a couple of years. My natural instinct is to frankly to be a citizen of the world, and that will interest me as much as the domestic politics of Vietnam, as the domestic politics of the United States, and maybe less so of the politics of Australia, given that I have turned that page.

I as a Global Citizen make a difference preserving the global commons whether it is cooperation on peace and security. Whether it is on sustainable development to ensure that the climate is possible for our kids and grandkids, or to have fast, efficient, effective humanitarian agencies which can deal with whatever disaster is served up next week, that is what global citizenship is about.

Now you don’t have to be some sort of lay martyr in order to do that, you can go out to the movies and have fun when you’re a global citizen. You can do that in corporate life and still be a global citizen; you could do that as life in civil society; you can do that as a politician; you can do it in a whole bunch of capacities including being a scholar. It is [the] way of thinking which is critical.