We Just Got $5.93B Committed to Affect 503M Lives with Global Citizen Festival India 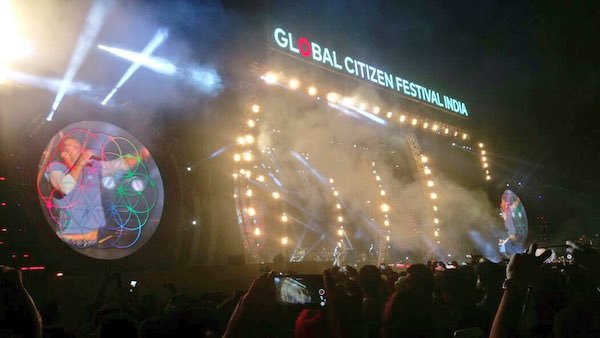 Global Citizen Festival India is a celebration of what our country is already doing, a powerful force to mobilize Indian youth and facilitate mass behavioral change, and a call to action for our leaders to do more to achieve sustainable and more inclusive growth.

In just two months, more than 5 lakh young Global Citizens (that's 500,000 for Westerners) in India took more than 20 lakh actions calling on political, faith and business leaders along with celebrities to be more accountable on education, gender equality, water and sanitation.

In response, leaders made 25 announcements and commitments through Global Citizen Festival India, which are set to affect 503 million lives through an investment of USD5.93 BILLION (40,500 crore).

Speaking via video-conference at Global Citizen Festival India, Prime Minister Narendra Modi, said to the 70,000 assembled young people, "You bring an energy and idealism that is unparalleled. I am convinced that we can and we will build a Swachh Bharat free of all forms of filth within one generation."

Global Citizens took 518,000 actions in support of investing in girls and women to achieve gender equality. These efforts secured 4 commitments that are set to affect the lives of more than for 2 million women, including TKTKTK

KARNATAKA: Government of Karnataka announces new partnership with WEConnect International to empower 1,000,000 women through enhanced entrepreneurial opportunities and policy change by the end of 2018.

GOOGLE: Google commits to bridge the online gender gap by training women in 300,000 Indian villages on how to use the Internet by end 2018.

QUALITY EDUCATION FOR ALL

Global Citizens took 265,000 actions, and the Global Citizen team advocated privately to businesses to use their expertise and CSR spend, in support of improving the quality of education for children. In response, four commitments were secured that will see improved education for more than 15m children.

CONNECTED TECHNOLOGIES SMART CLASSROOMS: ConnectEd Technologies commits to bring smart classrooms to 25,000 more students in Maharashtra by the end of 2017. This commitment follows 34,526 actions by Global Citizens on digital education.

IMPROVING TOILETS IN SCHOOLS: Yuva Unstoppable used a partnership with Global Citizen India to secure corporate support to enable 400,000 more students in schools to get access to better hygiene and sanitation by the end of 2017.

FRANCE: Secretary of State for International Development and the Francophonie Andre Vallini committed $2M to the Education Cannot Wait Fund following 185,000 global citizen actions. This is set to affect the lives of 14,600 children in emergencies by getting them back into school.

KWEKU MANDELA: Kweku Mandela spoke about the legacy of his grandfather, Nelson Mandela, and the ability of education to change the world. He called on Global Citizens to take action to get all children a quality education.

Global Citizens took 651,000 actions calling on government, businesses, faith groups and NGOs to outline how they would deliver on India’s commitment to clean water and sanitation for all. Combined with the advocacy of the Global Citizen team and partners, this resulted in 12 commitments and announcements that are set to affect the lives of 486m people.

ALL LEVELS OF GOVERNMENT MAKE THEMSELVES ACCOUNTABLE FOR ACHIEVING WASH GOALS INCLUDING SWACHH BHARAT AND ENDING OPEN DEFECATION. Global Citizens took 377,000 actions directed at all levels of — districts, cities, states and ministries — calling on them to step up their efforts to deliver key policies on water, sanitation, and hygiene their citizens.The Global Citizen team used these actions alongside private discussions asking government to publicly outline their specific plans to improve WASH, end open defecation and achieve the country’s Swachh Bharat goals.Here’s who came clean:

OPEN DEFECATION FREE DISTRICTS: Following 30,000 tweets by Global Citizens to the Minister of Drinking Water and Sanitation, the Central Government commits to 200 districts being open defecation free by 19 November 2017, affecting the lives of 120 million people.

TELANGANA: As part of Telangana’s flagship Mission Bhageerath, Minister K T Rama Rao committed to taking potable water to 2 million more families by end 2017. The government will commit to invest 9000 crore as part of this effort which will affect the lives of 9.6m people, and is being made in front of Global Citizens to ensure that citizens can hold the government to account to deliver on their promise.

MINISTRY DECLARES ITSELF ON TRACK: Secretary of the Ministry of Drinking Water and Sanitation, Shri Parameswaran Iyer, declares that open defecation has dropped from 600m to about 450m people, and that India is on-track to be open defecation free by October 2, 2019. He outlines the need to build another 600m toilets in that time, and the need for mass scale behaviour change.

OPEN DEFECATION FREE CITIES: Two cities - Kanpur in Uttar Pradesh and Ujjain in Madhya Pradesh commit to be open defecation free by end March 2017 after Global Citizens take 20,000 actions.  This is set to affect the lives of 396,000 people.

BUSINESS, FAITH AND NGOS COME TOGETHER WITH NEW COMMITMENTS FOR IMPROVING WATER & SANITATION. Global Citizens took 184,000 actions calling on businesses, faith groups and NGOs to make new commitments to achieve clean water and sanitation for all. In addition, the Global Citizen team met with dozens of companies to advocate for them to use their expertise as well as their 2% CSR budget to invest in tangible WSH projects.

TOILET BOARD COALITION: Toilet Board Coalition commits to help 125 million people gain improved access to sanitation and hygiene by 2020. As part of this, the board’s corporate members committed $15 million over three years to entrepreneurs to invest in innovative solutions to end open defecation.

GLOBAL INTERFAITH WASH ALLIANCE: Global Interfaith WASH Alliance (GIWA) commits, by December 2019, to inspire 2 million people, including 400 faith leaders, to live & act toward creating a world of improved cleanliness, sanitation and hygiene, in which fresh water also flows pure and sustainably for all. This follows more than 43,000 actions by Global Citizens.

UNILEVER: Hindustan Unilever India ‎CEO and Managing Director Sanjiv Mehta commits to reaching 1 in 7 Indians by 2020 with initiatives to improve water, sanitation and hygiene through the programmes of their brands including Lifebouy, Domex and Pureit. This is set to affect the lives of 198m people.

VIACOM18: Viacom18 affirms its commitment to install sanitation facilities at the 77 open defecation spots identified throughout Mumbai, and to deliver a behavioral change communication campaign to amplify Swachh Bharat reaching 500 million Indians, both by the end of 2019.

HUNGARY: Via video message, Deputy Foreign Minister László Szabó of Hungary affirms his country’s commitment to promoting the benefits of global sanitation, through supporting waste and water treatment operations in 54 countries, and in particular throughout cities in urban areas.

SWA PARTNERSHIP: Kevin Rudd, 26th Prime Minister of Australia, and Chair of Sanitation and Water for All High Level Partnership thanks Global Citizens for their actions, and urges them to keep pushing their leaders to end Tati.

Global Citizens took 403,000 actions in support of achieving the UN Sustainable Development Goals in India. They called on business, community and political leaders to outline how they were bringing their efforts in-line with the goals, resulting in 4 new commitments and announcements and 4 statements of support from global influencers:

MAHARASHTRA: Maharashtra’s Chief Minister made three commitments that are set to affect 29 million lives following 100,000 actions by Global Citizens - an open defecation free state by March 2018 for 36,000 lakh household with an investment of 5k crore; to improve the nutrition of 98,000 severely malnourished and 9 lakh moderately malnourished children with an investment of 142 crore; and to build 10 lakh homes for the homeless by 2019 with a pledge of 15,000 crore.

ANDHRA PRADESH: Following 90,000 actions by Global Citizens, the Chief Minister of Andhra Pradesh committed that the state would use the UN Sustainable Development Goals as a policy framework to guide future planning.

TIMES OF INDIA GROUP: Vineet Jain announces that the Teach India program will skill 100,000 people to find jobs by the year 2020, and calls on Global Citizens to join us as volunteer- trainers for Teach India to help our country be poverty-free. He also commits to support Global Citizen by tracking the progress of commitments that will be made by our Political leadership today.

QUAKER: As PepsiCo Nutrition Ambassador, chef Vikas Khanna affirms that the Quaker Feed a Child program is on track to provide 200,000 meals to children this year.

BILL GATES: Ahead of the Festival, Bill Gates recorded a video message say he was “delighted” that Global Citizen, in collaboration with the Indian government and partners like the Khemka Foundation is embarking on a 15 year journey to mobilize millions of young Indians in support of the Sustainable Development Goals.

RANVEER SINGH: Ranveer Singh tells Global Citizens that “if we pursue a goal together, we can achieve anything. From actions to decisions to commitment, it completes the circle — the circle of change.”

Throughout the event, hosts and speakers emphasized that this is just the beginning of a 15 year journey for young people to help India achieve its potential. They launched calls to action that form the basis of Global Citizen’s next ongoing campaigns, all of which can be taken at www.globalcitizen.in:

TOILETS IN MUMBAI: MP Poonam Mahajan asks Global Citizens for help in calling on other Mumbai MPs to create gender separated toilets in their constituency.

CHIEF MINISTERS ASKED TO DO MORE: Comedy troupe East India Company call on Global Citizens to keep campaigning to their chief ministers, calling on all chief ministers across the country to create an action plan for achieving the UN Sustainable Development Goals.

END POLIO AND ACHIEVE OUR GOALS: Amitabh Bachchan recounted India’s leadership in eradicating polio, and called on Global Citizens to take action to get leaders across the Commonwealth to prioritise the Sustainable Development Goals.

MENSTRUAL HYGIENE CHAMPIONS: Global Citizens were called on to ask celebrities to champion the cause of menstruation hygiene to ensure periods do not become punishment.

COMPANIES TO SPREAD DIGITAL LITERACY: Following HP's commitment to bring improved education to 15m Indians, Global Citizens were asked to call on other companies to help spread digital literacy to every person in the country.

WASH: Global Citizens are called on to ask business and governments to ensure access to proper sanitation and water where people work and live.

END OPEN DEFECATION: Sachin Tendulkar told Global Citizens how he has seen how collective action makes a difference to children’s lives. He called on Global Citizens to join him achieving Scwachh Bharat, and asked them to take actions to ensure that even more governments and companies to end open defecation.