“I believe that technology can be the great equalizer,” said Reshma. 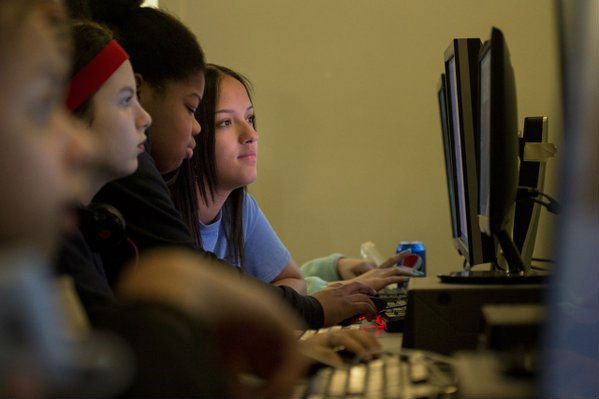 In a basement of the Brookview House – a homeless shelter – girls as young as fourteen are learning to code.

A transitional housing shelter teamed up with Girls Who Code to teach homeless girls tech skills. The coding classes held in the shelter’s basement are a big step toward eliminating the gender gap in technology as well as ending poverty.

Tuesday, May 3rd, is National Teacher’s Day in the US. While it’s a day to salute formal teachers in the education and school system, it’s also important to reflect on individuals making a difference teaching in a different setting.

Girls Who Code is a non-profit founded by Reshma Saujani with a mission to close the gender gap in the technology and engineering sector.

By teaching coding to girls at the Brookview House in Dorchester, Massachusetts – a temporary housing shelter outside Boston – Girls Who Code is working toward closing the gender and income gap as well as finding a path out of homelessness for young girls.

Each Wednesday night, girls living in the homeless shelter come together united by a voracious appetite for learning and start typing away.

They are part of the Brookview House Girls Who Code Club. The specific club was started nearly two years ago and is the only coding club for homeless students in the country.

The Girls Who Code Club is strictly a girls only club and teaches coding in a holistic approach. Volunteer teachers are female software engineers, like Charity Leschinski, who also takes the time to check in on the girls, asking them about homework, friends at school, and any challenges in their daily lives.

According to Reshma, including underprivileged communities in their mission to support girls and women can make a big difference in eliminating inequality.

“I believe that technology can be the great equalizer,” said Reshma.

More than half of the girls at the Brookview House in the club live in poverty. The program gives them an opportunity to earn a middle income wage thanks to the tech skills they are learning.

The schools the girls at the Brookview House attend have limited Wi-Fi and often lack computers, so coding classes are usually out of the question according to volunteer teachers for the club.

Learning to code is empowering these girls at a young age and opening up the world for them.

Before participating in the coding club lessons, one student, Janae, said she planned on becoming a hairdresser and believed nobody in her family has a “high job.” After several weeks of coding lessons, she now plans on becoming a doctor.

Access to STEM fields is so incredibly important for girls and truly has the power to change lives.

Just take it from Janae – in a matter of weeks one girl living in a homeless shelter began to believe that she could truly be anything she wanted and is now pursuing that dream.

Sometimes all it takes is giving a child the encouragement, and tools to believe in themselves. The power of a caring teacher doesn’t hurt either.