When marooned in the Aleppo, there’s no way to avoid destruction. 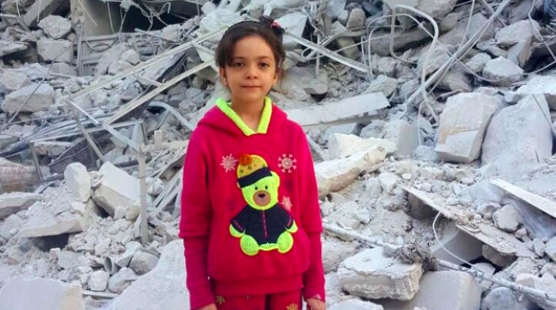 Update at 12:56 p.m. ET: The BBC is reporting that Bana Alabed is "safe" and that her Twitter account has been restored. We'll update this story as we learn more.

Stuck in the embattled city of Aleppo, 7-year old Bana Alabed’s one lifeline to the rest of the world has been a Twitter account that she and her mom, Fatemah, used to show what was happening and to ask the world for help.

As Aleppo deteriorated over the past few months, Bana’s Twitter following surged. More and more people became invested in her safety and saw her plight as emblematic of the larger tragedy — would a child be spared the war’s brutality?

Last week, her followers became alarmed after Bana tweeted that their house had been shelled and they were on the run.

And early Monday, Bana's Twitter account disappeared altogether. The last message read: “We are sure the army is capturing us now. We will see each other another day dear world. Bye.-Fatemah #Aleppo.”

It reappeared later on Monday, but it's unknown what happened to Bana and her family in those hours. The most recent message reads: "Under attack. Nowhere to go, every minute feels like death. Pray for us. Goodbye - Fatemah #Aleppo."

As more and more of the city has come under seige, tens of thousands of people have been bottlenecked in holding spaces after trying to escape Aleppo. The battle for Aleppo seems to be coming to an end as the last rebel outposts are extinguished by the government. It’s possible that upon encountering a huge group of civilians who pose no threat, the army will choose to lead them to safety.

Read More: 'I Am Very Afraid I Will Die Tonight': Young Girl Tweets of Horror in Aleppo

The week before, Bana was injured when her apartment complex was bombed and her family fled. It was a scene any spectator of Syria was grimly anticipating — when marooned in the Aleppo, there’s no way to avoid destruction.

Read More: This Girl, Tweeting From Aleppo, Had House Bombed. Now She’s Running For Her Life.

Bana survived and fled, but a new note of desperation crept into her mom’s tweets. She knew all too well how life in Aleppo can be swiftly crushed. As they fled, you could sense that her world and her hopes were shrinking.

Now their world must be more suffocating than ever, plunged into a digital darkness, cornered on all sides by the physical horrors of Aleppo.