Reports of child labour on cocoa farms in Ivory Coast emerged in the late 1990s. 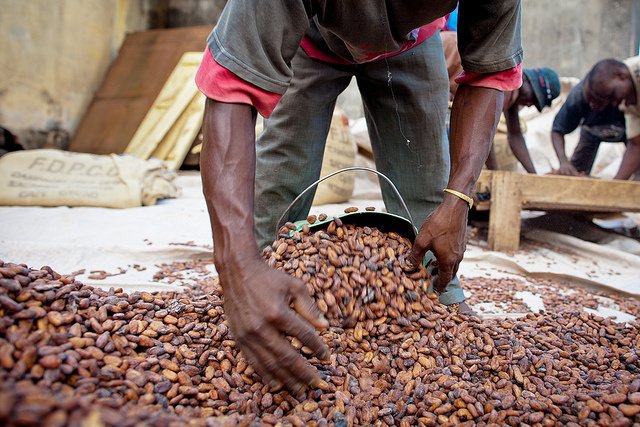 DAKAR, June 12 (Thomson Reuters Foundation) - A drop in global cocoa prices threatens to undermine efforts to stamp out child labour in Ghana and Ivory Coast, the world's two biggest growers, as falling incomes could force farmers to send their children to work, charities said on Monday.

More than two million children are estimated to work in the cocoa industry across the two West African nations, where they carry heavy loads, spray pesticides and fell trees using sharp tools, according to the International Cocoa Initiative (ICI).

The countries' governments, civil society groups and some of the world's top chocolate producers have in recent years ramped up efforts to tackle child labour in supply chains, invest in cocoa growing communities, and get more children into school.

Take Action: Children Around The World Deserve To Go To School​​​​​​​

Yet the economies of Ghana and Ivory Coast, which together account for more than 60 percent of the world's cocoa supply, have been hit hard by a sharp drop in world prices that have seen cocoa futures plummet by around a third since last summer.

"If these low prices translate into lower incomes for poor families, and household poverty gets worse, we are worried that the risk of child labour will increase," Nick Weatherill, executive director of ICI, told the Thomson Reuters Foundation.

Children could be taken out of school if their families can no longer pay the costs, and many may be made to work on cocoa farms if growers cannot afford to employ labourers, he added.

"The drop in prices does create greater vulnerability ... (due to) further demand in an already strained landscape," Ruth Dearnley, chief executive officer of Stop The Traffik, said as charities and activists marked World Day Against Child Labour.

Read More: Shoe Maker: A Life I Can't Imagine for My Son

Since reports of child labour on cocoa farms in Ivory Coast emerged in the late 1990s, the chocolate industry has been under pressure to prove its beans are not cultivated by children.

The ICI said its child labour monitoring and remediation system (CLMRS), which it has established in the supply chains of cocoa giants Cargill and Nestle, expanded last year to cover about 60,000 cocoa farming households in Ghana and Ivory Coast.

A report earlier this year by Stop the Traffik which analysed the sustainability efforts of some of the world's leading chocolate companies found that Nestle had the best CLMRS and was the most transparent at reporting cases of child labour.

"Whilst the drop in cocoa prices could potentially undermine civil society efforts to date ... the reality is that these efforts are more critical than ever," Dearnley added.