How sound policy can silence the sound of suffering

Sound polices make it is possible to avoid the worst-case scenario. 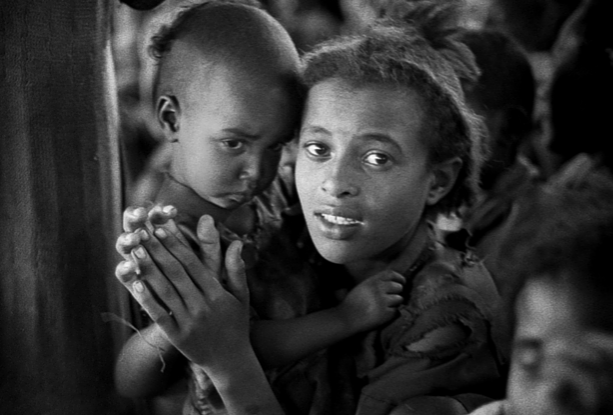 This article was contributed by Steve Reynolds, director for advocacy campaigns at World Vision.

In 1985, a hungry Ethiopian family huddles in their "home" in a dry river bed.

30 years ago, bad policies, drought, and the resulting famine led to mass starvation and the deaths of at least 400,000 people in Ethiopia.

Today, as parts of Africa face a new drought, we have the opportunity to put in place a good policy that could help prevent another worst-case scenario. Learn about the bill that's in Congress right now and what you can do to help.

I will never forget that sound as long as I live.

It woke me from a dead sleep at 5 a.m. In a half-dream state, it sounded like an air-raid siren had gone off, and I momentarily thought of diving under my bed for safety. As I clamored to consciousness, I realized it was a cacophony of noises mingling together, floating away across the predawn fog in the Northern Ethiopia town where I had passed a fitful night. The apocalyptic chorus emanating from just outside the compound wall so unnerved me that I bolted out of bed, grabbed my jeans, and ran out onto the veranda of the small motel we had converted into staff quarters.

The year was 1984, and it was my first visit to Alamata, World Vision’s vanguard feeding center in Northern Ethiopia. Alamata was “ground zero” for our burgeoning relief program at the start of the 1984-85 famine. I was the new communications officer stationed in Addis Ababa, sent from my comfortable life in Southern California to cover the relief operation. My job was to photograph and document conditions on the ground for news and fundraising publications around the world. Having volunteered mainly for adventure and a desire to travel, I had no idea what awaited me as I stood witness to one of the greatest human tragedies of modern times.

Grabbing my camera bag, I dashed out of the compound into the main street of the town. I blinked my eyes in disbelief as hundreds of people made their way slowly up the main street to the Orthodox church, wailing at the top of their lungs all the way. Their destination: the cemetery — it was a funeral procession. Two- to three-hundred people accompanied at least 50 bodies to the cemetery that morning.

A young child waits for aid in the Alamata health and nutrition center. 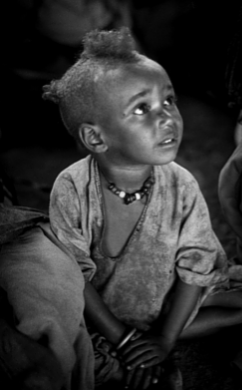 I soon learned that this happened every morning. Many of the makeshift coffins were small, only 3- to 4-feet long — obviously built for a child. As is customary in Ethiopia, women wailed and cried while men recited stories about the deceased and their lives. Added to this were the sounds of dogs barking, donkeys braying, and crows, buzzards, and vultures accompanying. The sound was surreal.

Northern Ethiopia was in the grip of a cataclysmic crisis. Millions of desperate families had left their farms and sold their belongings to buy what little food was left in the markets, and were now dying daily by the thousands. But drought wasn’t the only factor driving that famine. Another, more sinister cause was bad policies. The Ethiopian government at the time was a socialist regime headed by Mengistu Haile Miriam. “Comrade Mengistu” had come into power in 1975 because of yet another devastating famine in 1972-73.

Mengistu was fighting a war on two fronts, north and west. His authoritarian regime instituted a socialist agricultural system, forcing smallholder farmers to sell only to the government. When the government needed more cash, they simply raised the quota of food required by each region based on inflated production estimates — or lowered the price they paid the farmers. This resulted in many districts having to buy food on the open market just to meet their quotas. When drought came in 1982-83, there was no margin for error, no surplus to fall back on, not enough food to go around. Farmers — who existed on a thin line of survival in normal times — found themselves completely destitute. Their food stocks had run out, and they had no cash reserves to buy the food they needed. The result: mass starvation. The Ethiopian Famine of 1984-85 claimed at least 400,000 lives, with some estimates as high as 2 million.

Thirty years later, I look at the tools we have that could have helped prevent scenes similar to those I witnessed so long ago. Today, we have a chance to enact a bill in Congress that could help address many of the problems we saw in Ethiopia in 1984-85. It is called the Global Food Security Act (GFSA). Food supplies are plentiful at this market in Antsokia, Ethiopia, 30 years after the 1985 drought and hunger crisis. 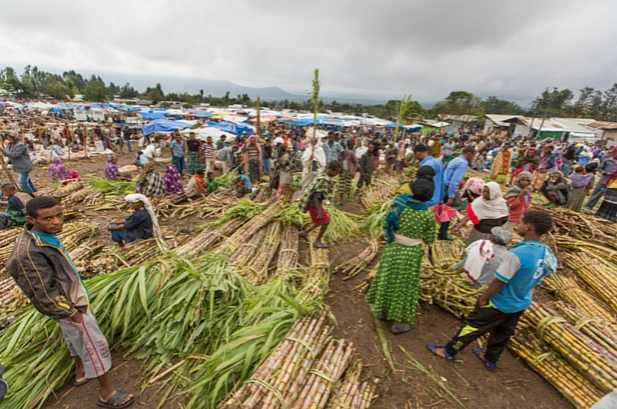 The GFSA prioritizes U.S. government policy around key best practices designed to assist small-scale farmers — like those in Northern Ethiopia — through increasing sustainable agricultural development, reducing global hunger, and improving nutrition. The GFSA would continue progress made as part of the Feed the Future Initiative, which is making an impact in many countries around the world by investing in women’s savings groups, crop diversification, climate-smart agriculture practices, and locally appropriate storage mechanisms to allow farmers to save their crops until optimal market conditions exist.

Through the GFSA and ongoing efforts of Feed the Future, U.S. government policy is supporting the development of agriculture markets and building resilience against shocks like extreme weather. Properly implemented, with local government support as well as involvement from the private sector, churches, and universities, these practices can play a part in safeguarding communities from the kind of devastating food shortages that cause widespread famine.

This year, numerous African countries are facing drought due to the worst El Niño weather pattern in decades. Ethiopia is the most severely affected due to its large population (nearly 100 million people) and vast, challenging landscapes. But thanks in large part to better development policies and practices from government and humanitarian organizations that have learned from past mistakes, there is an unprecedented effort underway to prevent massive loss of life. The months ahead will be critical, but at least sound polices make it is possible to avoid the worst-case scenario.

Looking back, I wish the families I saw in 1984-85 had the kind of support and resources that are now available. I am convinced that, if they had, hundreds of thousands of lives could have been saved.

I wish we had had the GFSA back then, so that funeral procession which woke me from a sound sleep on that foggy morning in 1984 might never have happened. Thanks to advocates like you, the Global Food Security Act is one step away from being sent to the President's desk for signature into law! To push this bill across the finish line, ask your Representative to support the final passing of this bill!