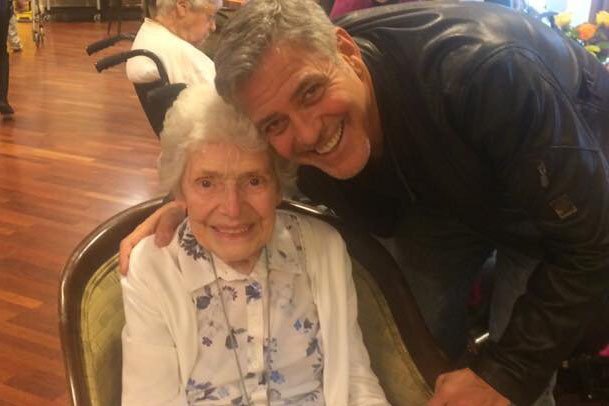 It turns out that the husband of famed human rights lawyer Amal Clooney is a Global Citizen, too.

Actor George Clooney made a surprise visit to an 87-year-old fan in her nursing home in Sonning, England, on Sunday to deliver her flowers for her birthday.

Pat Adams, the lucky fan who received the flower delivery, had long harbored a dream of meeting George, according to the BBC. The staff at Sunrise Assisted Living of Sonning routinely tries to make residents’ wishes come true while they are living at Sunrise with their in-house, "Wish upon a Star” program.

Read More: With Amal Clooney at Her Side, a Yazidi Former Sex Slave Pleaded to the UN to Take Action

The staff wrote a letter to George, though they never actually expected him to show up at the door, according to the report.

"They didn't think they would be able to pull this one off," Sunrise spokesman Malcolm Hague told GetReading, the local newspaper.

Sunrise employee Linda Jones posted on Facebook that she was in "utter shock" when she saw the Oscar-winning star arrived. She said Adams "loves George Clooney and mentions everyday how she would love to meet him,” according to the BBC.

Adams described the moment she realized she had a visitor in an interview with SkyNews.

Adams said that Clooney handed her the flowers adn a card and shook her hand. The card read simply, "Pat, I thought you'd like some flowers. Love, George," she said.

"It was just lovely, I think he’s a lovely man, I’ve had a lovely day. It’s been absolutely wonderful. I just think he’s a handsome man, he does a lot of good, and I just like him, and that’s all there is to it really," she said.

That's almost all there was to it, until the SkyNews anchor asked Adams whether there was anyone she'd like to meet for her birthday next year.

"Well, I don’t think anyone can top George Clooney," she said, "but brad Pitt would be nice. I mean you never know."

"I don't think anyone can top George Clooney, but Brad Pitt would be nice," 87-year-old Pat Adams talks about her surprise visit pic.twitter.com/bWori9s5Tw

Amal Clooney, who frequently appears at the United Nations to argue on behalf of Iraq’s Yazidi genocide victim Nadia Murad, lives with her husband nearby in Sonning, so it wasn’t too far for George to travel to make Adams’ day.

"This was a classy gesture from a wonderful man," Hague said. "She was absolutely thrilled to meet her great icon, and it was such a lovely surprise to see George greet her with flowers and a card."

George Clooney, of course, in addition to being married to Amal and working as an actor, director, and producer, is a storied philanthropist and humanitarian who has devoted much of his personal life to supporting campaigns to end wars and poverty.

He helped found Not On Our Watch, to stop the genocide occurring in Sudan, and has supported UNICEF in its child protection and welfare services efforts for Zimbabwean refugee children. He’s also supported the ONE campaign to end AIDS and sat on the board of United Way.

Now, as he adds “sweet gestures toward the elderly” to his humanitarian resume, he and Amal are true representatives of what it means to be a Global Citizen.