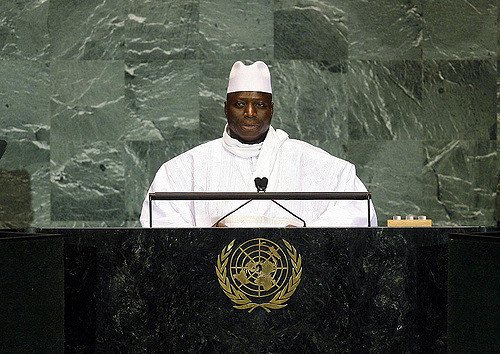 One of the hallmarks of democracy is supposed to be the peaceful transition of power from one leader to the next after an election. Unfortunately, that is far from what is currently happening in the Gambia.

Read More: How People Vote Around the World

After losing the election on Dec. 1, former president Yahya Jammeh refused to give up power, alleging that fraud occurred. But after mounting international pressure and the threat of military intervention from five surrounding nations, he finally fled into exile. Now, 500 million dalasis (just over $11 million) are missing from the Gambian treasury. After confirming the funds were missing with the ministry of finance and Central Bank of Gambia, Mai Ahmad Fatty, a special advisor to new President Adama Barrow, claims Jammeh made off with the money during the last two weeks. An unknown number of luxury cars were reportedly flown out of the country as well.

“That’s a lot of money,” Fatty told the BBC, “considering that we spend about 200 million dalasis on required expenditure relating to payment of civil service and so forth. […] The coffers are virtually empty.”

It is yet another challenge incoming President Adama Barrow will face when he finally returns from Senegal, where he has been waiting for Yammeh’s departure, though it is uncertain when exactly that will be. He has pledged to investigate all of his predecessor’s abuses through a Truth and Reconciliation Council.

This latest heist is hopefully the punctuation mark on Jammeh’s 22-year regime. Since taking power in 1994, Jammeh has committed countless human rights abuses in order to maintain his grasp over the nation. A 2015 report from Human Rights Watch details extrajudicial killings, disappearances, torture, and attacks on media and free speech, among other state crimes. Paramilitary groups, most notably the Jungulers, targeted critics of the government and LGBT people in particular were subject to persecution.

Read More: Journalism Is Under Attack All Around the World

Jammeh initially accepted the election results before doing an about-face to challenge them, spurring the newly elected Barrow to flee to Senegal for his own safety. A Senegalese general led the joint militaries that finally forced Jammeh out, occupying the capital city of Banjul. They must now ensure President Barrow’s safe return.

Jammeh is possibly in Equatorial Guinea though reports are not confirmed. If he is there it could remain a haven as the nation has its own authoritarian President Teodoro Obiang Nguema and does not recognize the International Criminal Court.

What is confirmed, however, is that the money is gone and the Gambia is facing an internal struggle to stabilize itself.

On the plus side, the man most responsible for the nation’s suffering during the past two decades no longer has absolute control. This fact alone is being hailed as a victory among the Gambian people. On an international level, the Gambia’s neighbors have committed to helping the Gambia establish a true democracy.

It’s a testament to the ability of people to rally together to overcome one man’s cruelty and greed. Indeed, Jammeh might not be on the lam for long.