“Who am I to give up?” questioned Zainab Salbi while refugees hold so much hope. 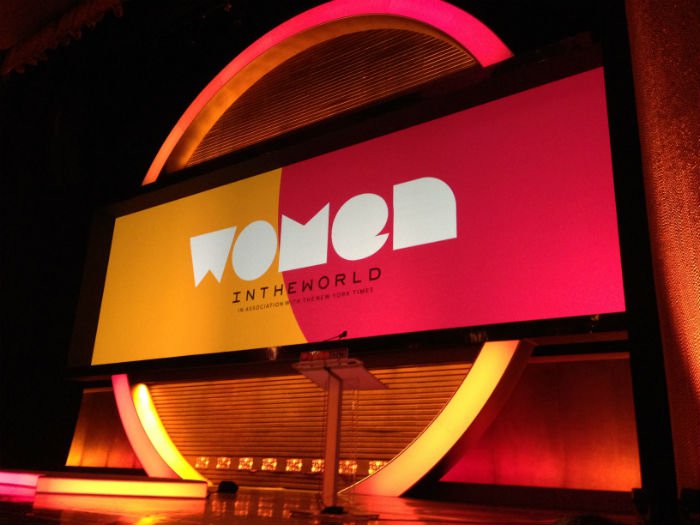 This week, at Lincoln Center in New York City, some of the world’s most powerful women gather in one room for the Women in the World Summit. The confidence, humanitarian spirit, and intelligence and (I have to say) the heels, displayed both on and off stage were breathtaking.

But women like the summit’s host Tina Brown, weren’t there to showcase their success. They were their to speak on behalf of millions of women around the world who, due to gender discrimination and persisting injustices against women, cannot share their voices.

In the most powerful part of opening night (for me at least), a panel of experts on the refugee crisis held the rapt attention of over 2,500 people in the theater.

The panelists did not tell their own stories. Instead they amplified the stories and voices of women who have been repeatedly raped, children who continue to be failed by inefficiencies in governments and NGO systems, and families rejected by societies who let fear dictate their decisions.

The stories and images they shared during the segment entitled, “Refugees: They Are Us” made the audience feel like you personally knew each of the refugees they illustrated through words and images.

Here is a brief glimpse of the four incredible panelists and the even more courageous women and children they spoke on behalf of-- some nameless and some whom their names you should get to know.

The woman in front: Lynsey Addario

Panelist Lynsey Addario is a renowned photojournalist working tirelessly both to document conflict and grab the attention of an often apathetic global society. She aims to  in evoke emotion, concern and eventually action from bystanders in the refugee crisis.

"[The photo] could have been anyone of our brothers or sisters" @lynseyaddario on the images from the refugee crisis pic.twitter.com/iFigOxO3ap

Addario spent months in a refugee camp for Syrians documenting the lives of refugee children. She spent most of her time with one young teenage girl, often spending every waking (and sleeping) hour with her.

The images from this girl’s daily tasks revealed a girl who no longer goes to school and all her time working to help her family. Addario said she napped with the girl, and would go with her to her job picking fruit, riding in the back of a truck to get there.

A tragic image conjured from her experience was that of refugee children so tired from working in the field they were “literally falling out of the trees,” said Addario.

Addario also addressed the image that finally caught the world’s attention, got people talking and lead to the first steps of action. This of course, was the heartbreaking photograph of 3-year old Alan Kurdi whose dead body washed ashore a beach in Greece.

What finally got to the rest of the world was that “this could be anyone’s child,” said Addario. “He looks like he’s sleeping” continued Addario, but the reality is something so far from that.

The woman in front: Liz Clegg

Liz Clegg & her daughter Inca Sorrell on a 6-year-old refugee boy locked in a refrigerated truck in Calais:https://t.co/rZXa7Nd9BK

Liz Clegg spent most of her life as a firefighter in England. She never dreamed, and is still surprised, she’d spend the last seven months in “the jungle” -- a refugee camp in Calais, France where Syrian refugees wait and hope to make it into neighboring England. Yet that is exactly where she’s been since September.

Clegg is still super casual about the whole thing too. Her journey into the jungle started with a few sleeping bags. She had extras and took initiative to drive them down to Calais herself. When she arrived at the refugee camp there was nobody there to hand out the provisions she brought. So she stayed.

Liz’s technical title is “independent volunteer” because there is a such a lack of organization in the jungle.

Statement from @HelpRefugeesUK about 7yo saved from suffocation in lorry yesterday #calaishttps://t.co/dFcs92bxcypic.twitter.com/mBcaLEiBob

Liz brought to light the fact that there are hundreds of children with no emotional support or structure in their life living in the jungle. Worse, children are dying because nobody is there to teach them how to live because those around them have such broken lives.

She talked about two children who climbed onto a refrigerated “lorry" to be smuggled to England. One suffocated. The other child climbed underneath and was holding onto the bottom of the lorry and was killed when the truck crashed into another car.

It’s disgusting...and nobody is there to help,” said Clegg.

Older children in the camp suffer as well. Clegg spoke of a refugee boy who entered the UK when he was just 9-years-old. Now, that same boy is approaching 17 and may be sent back to the terror he fled years ago when his asylum request is assessed as an adult.

The woman in front: Zainab Salbi 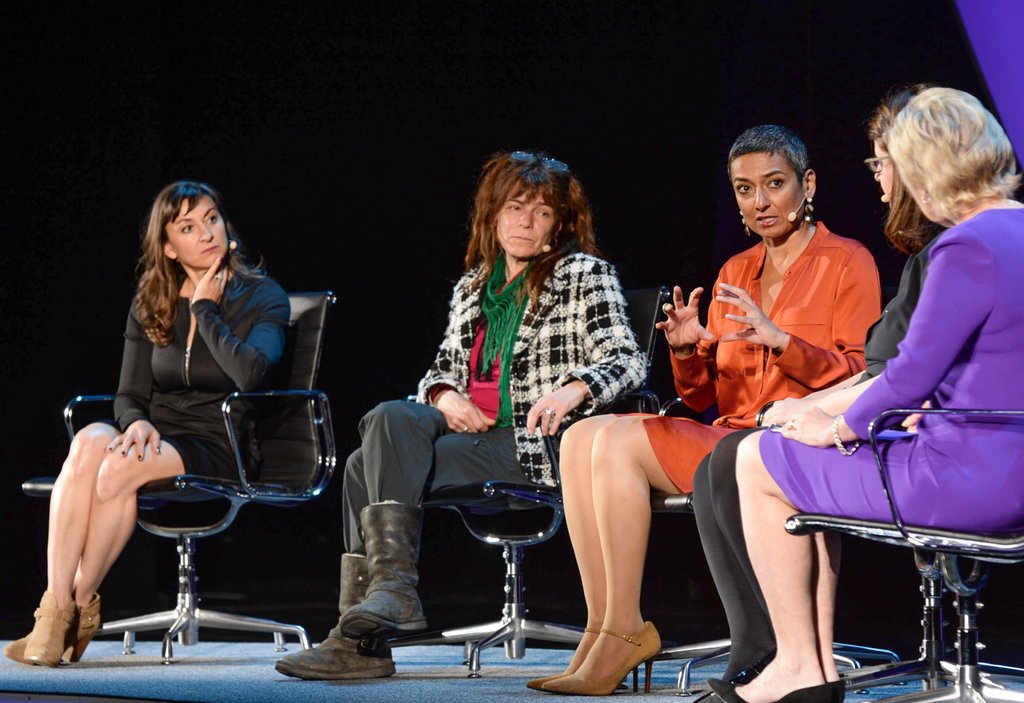 Zainab Salbi is the image of beauty, grace and elegance. She is Iraqi-American and the host and creator of The Nida’a Show and Founder of Nida’a al Nissa Productions. Six publications have named her one of the most influential women in the world. She founded a grassroots organization at the age of 23 for female survivors of war. At one point, she went nine years without seeing her family all for the purpose of serving women in the world who don’t have a platform to raise awareness. 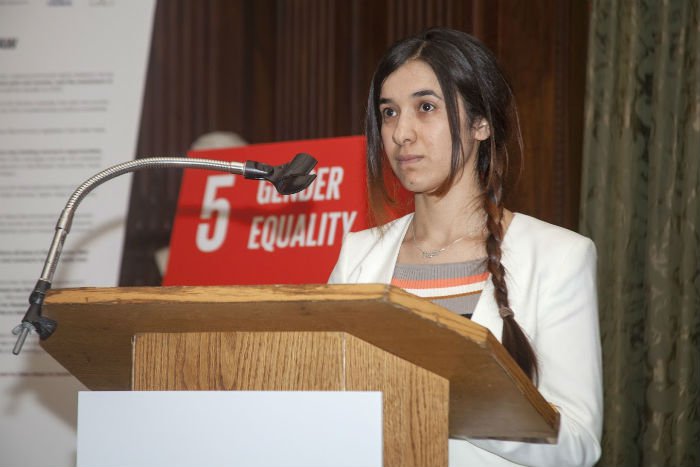 Here is a name for you to know -- Nadia Murad Basee Taha, or just remember Nadia if that’s easier. After hearing Nadia’s story you will remember her name because it’s so disturbing and deeply saddening. It is a story more than 5,000 girls and boys in the Yazidi community endure.

Nadia was a 21-year-old student when her village in Northern Iraq was attacked by ISIS. She and many other women were forced into sex slavery while over 300 Yazidi men were killed in her village.

The terrorist group continues to commit gross acts of sexual violence, rape, kidnapping, and genocide against the Yazidi people in the Tanjar Mountains. Nadia was just one of thousands of girls who are being raped, beaten and watch their families disappear or be murdered in this region.

Nadia escaped ISIS and has since been retelling (and reliving) this nightmare over and over so that the global community will wake up and react.

Nadia has been through so much, and we could talk about the gruesome details of her capture, how she was forced to pray before she and other girls as young as nine were raped by members of ISIS but that’s not the part of her story the matters. What matters is nobody is helping her people now, and her government is not letting the International Criminal Court have jurisdiction over her village to prosecute ISIS for ongoing crimes against humanity. What matters is while other women took their lives or were murdered by ISIS after pain and suffering, Nadia is still here telling her story and she needs the world to listen and help her.

The woman in front: Becca Heller

Becca Heller is a fierce lawyer and now the Director of the International Refugee Assistance Program at the Urban Justice Center. She fights for girls and women you’ll never meet,with a passion and intelligence for the complexity of helping sex workers, women stuck in dangerous human trafficking situations.

"The refugee crisis isn't new, what is new is that people are finally paying attention." -Becca Heller #WITWpic.twitter.com/svfe2eTrWP

Heller told the story of women who need to remain anonymous. She told what some of these women go through and it’s gut-wrenching. One woman she spoke with watched her family be executed, then she was raped by thirteen different men. She cannot escape her situation currently, but she was able to get her story out.

How does Heller find and connect with these silenced women? Her organization thinks like a woman. They set up communication networks in places like hair salons. They use these locations to check in on vulnerable female sex workers or victims of human trafficking as well.

We, as global citizens, hope action is taken and lives are changed so that soon no woman or child has to go through the experiences of refugees like Nadia, or children in the Calais’ jungle.

Finally, I want to share one last piece of inspiration.

During the panel, Zainab Salib was asked if there’s hope in the refugee situation. And through all the horror she hears about, the actions not being taken, she, and all the women on the panel, remains hopeful. Salib does this by thinking of the refugees and brave victims who don’t give up.

“Who am I to give up hope if this woman is still hopeful?” said Salib.

Let’s not give up either.