For Paris, lessons learned from 9/11 are still painfully relevant

France stood with New York in the wake of 9/11. 14 years later the wisdom gleaned is still important

On Friday, November 13, over 130 people died in six coordinated attacks across Paris. The events, which unfolded over the course of several hours, were felt across the world.

And across the world, people united in solidarity. During the attacks, much of the Paris Metro was shut down, making it difficult for scores of people to get home. One of the first responses came from Parisians offering housing to those in need. Quickly the hashtag #portouvert (#opendoor) flooded Twitter, as residents flung open their doors to those stranded and in need of shelter.

#portouvert if you're in Paris and cannot go to your house

Landmarks from Rio de Janeiro to Sydney were lit up in Les Trois Couleurs, the iconic red, white and blue of the French flag.

Facebook’s safety check, which originally launched in October 2014 to check in during natural disasters, was activated for the first time in response to a human disaster. Social media was filled with the painted image of the Eiffel Tower made into a peace sign. This quickly became the image of solidarity with Paris.

Meet the man behind the iconic "Peace For Paris" sign that spread across world @FastCoDesignhttps://t.co/w5MwV800Syhttps://t.co/VHGSyy0P65

Among the reactions spreading like wildfire across the internet, one was hauntingly familiar.

#NousSommesTousParis. We are all Paris.

It reminded me of another time when the world came together in unison and horror. On September 12, 2001, the French newspaper Le Monde ran the headline Nous Sommes Tous Américains, We are all Americans.

14 years before the attacks on Paris, the world stood in solidarity with New York. It stood together in compassion and in outrage. Tens of thousands visited the US Embassy in Hong Kong to leave hand-written letters of support, and over 200,000 Germans filled the streets leading to Brandenburg Gate. Artists in Cuba donated blood for the victims, and in a telegram to President Bush, President Putin said, “Such an inhuman act must not go unpunished.”

But there were other responses as well.

In 2003, France cautioned against overly zealous military action as a response to 9/11. President at the time Jacques Chirac said in a statement “We just feel that there is another option, another way, another more normal way, a less dramatic way than war, and that we have to go through that path. And we should pursue it until we’ve come [to] a dead end.” 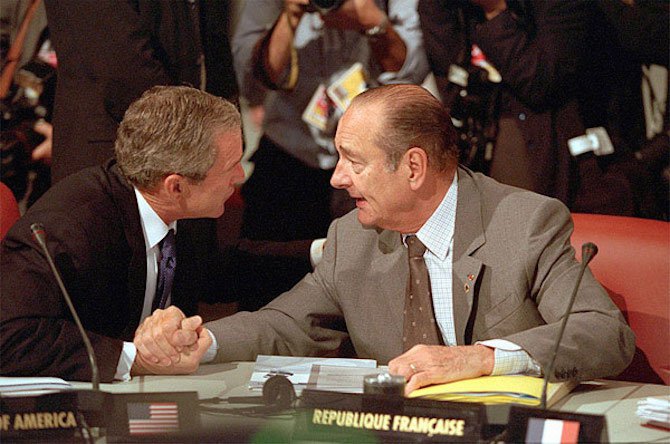 12 years later, in hindsight, that caution was well placed. The ensuing war the US found itself embroiled in resulted in more American deaths than 9/11 and trillions of dollars spent--it also helped to destabilize Iraq and neighboring countries.

In his speech during the Paris attacks, President Obama said “We stand prepared and ready to provide whatever assistance the people of France need to respond.”

In his statement after the Paris attacks, French President François Hollande called the violence an “act of war,” and that it must be addressed “mercilessly.”

On Sunday, two days after the atrocities in Paris, French airstrikes hit numerous ISIS controlled sites in Raqqa, Syria. On Monday, up to 300 ISIS trucks carrying supplies were hit by US airstrikes.

Speaking in Turkey on Monday, Obama said putting more US troops on the ground in Syria “would be a mistake.” In the same press conference, Obama said there would be “an intensification” in action against the ISIS, and that at this point the US will “continue the strategy that has the best chance of working.”

The two situations are different, of course, but the international community can’t forget the lessons learned from 9/11 when responding to the Paris attacks. In an effort to capture those responsible, the United States became ensnared in the longest war in its history, costing tens of thousands of innocent lives and damaging the stability of the entire region.

This doesn’t mean that military action should be ruled out. The crimes against humanity that ISIS is committing need to be stopped. That much is sure.

But just as France cautioned 12 years ago, the broad stroke strategy of the War on Terror should be avoided. Too many innocents have died in conflicts that they had no part of. Leaders must realize that it’s up to them to keep that number from rising any higher.

And most importantly, the entire religion of Islam cannot be blamed for the actions of few. The wholesale vilification of Muslims must never happen.

Though at this point it’s impossible to tell how effective the recent strikes against ISIS controlled territory in Syria have been, it’s important to keep the idea of solidarity alive. And it's important to know that an effective response must involve more than bombs.

Nous Sommes Tous Paris Aujourd’hui, We are all Paris today.